2022-01-04 Yesterday I installed the recently released G90_MainUnit_FW_V1.78b2021123101 firmware update along with G90_DispUnit_FW(stdcm3)_V1.77b2021032102 as directed. I've been using version 1.75 Final for quite a while now and been very pleased with it. But I like trying the latest thing, hence the update. The update installation went smoothly and the radio came to life as expected. Had to adjust the CW sidetone level down so it wouldn't blow me out of the room but otherwise it worked pretty much as expected on both receive and transmit.
Initial observations. The primary operational thing i noticed is that the function of the AGC is quite different. I think I like it better as it is much more like AGC on most rigs. A related thing I noticed is that with AGC active, selecting Attenuator, no attenuator or Preamp made relatively little difference whereas it made a large difference in the previous version. I am still trying to understand how AGC and manual RF Gain work. It appears that with AGC off the manual RF Gain adjustment is in full control. But if AGC is on Fast, Slow or Auto it takes full control. I'll keep working with it to try to figure out how to use AGC, RF Gain and Attenuator together to get best results.
2020-10-18 After posting the pictures below on Facebook yesterday someone asked, "I would be interested to know how to you compare the G90 with the IC-7300?" I really like both. I find the g90 receiver equal to the 7300. I like the way you tune it vs the way you tune the 7300. The receive audio out of the box of the g90 is more pleasant to me than the 7300. Using an external speaker or headphones they are same. The filtering is excellent on both. Overall the g90 seems a bit simpler to use and adjust but capabilities are very similar. Both exceed the 7000, 7100 ft817nd and ft857d and other rigs I've owned. I am happy with the smaller display on the g90. As to the xmiter, again both do well what I do mostly, CW, SSB, and some digital. I don't find the 20 watt max output of the g90 a seriously limiting factor. In fact I run the 7300 at 20w almost exclusively as well. The one feature I do miss on the g90 is recordable CW messages for repeating CQ calls. But the excellent internal tuner of the g90 makes up for it! The g90 is also much more portable-friendly. If I had to let one of the two go, not sure which it would be.
2020-10-17 ​I used my G90 portable, recently on several POTA adventures. I have separated the control head so I can place it for more convenient viewing and adjustment. I've used a bracket I made months ago but have not been all that happy with it so today I remade it! The pictures show it. My idea is that I can tilt it up for use and lay it down flat for packing. We'll see how I like it after a few uses. On my desk it seems to work great. 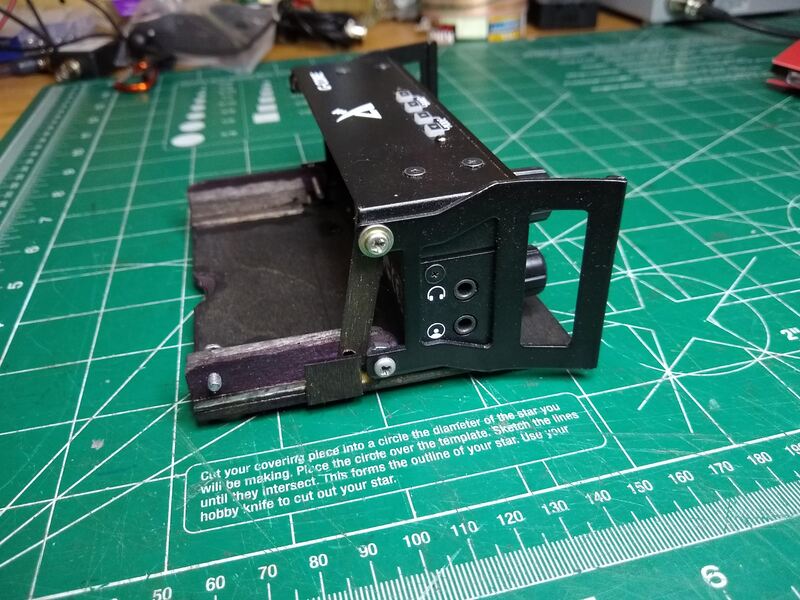 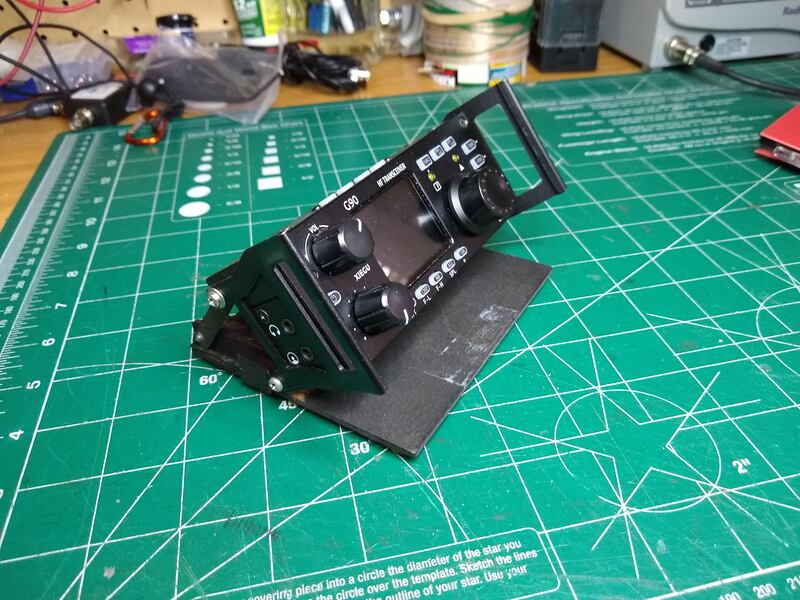 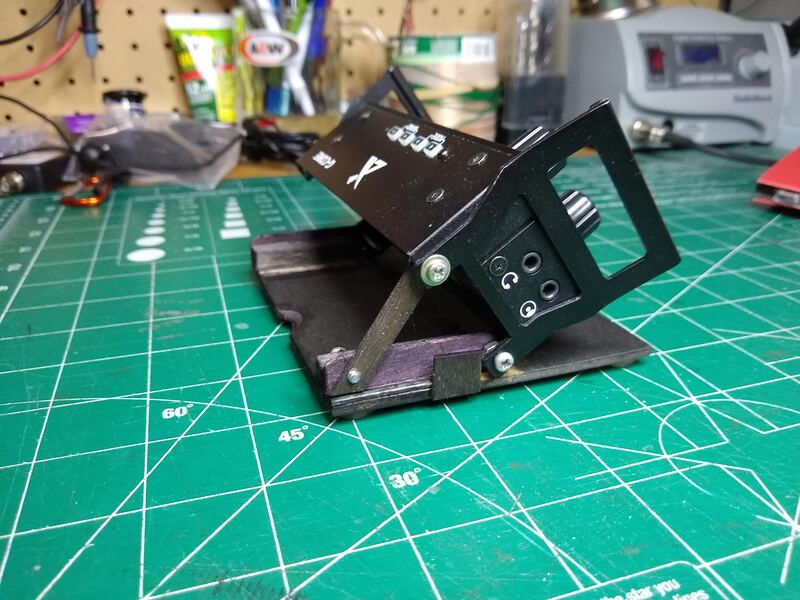 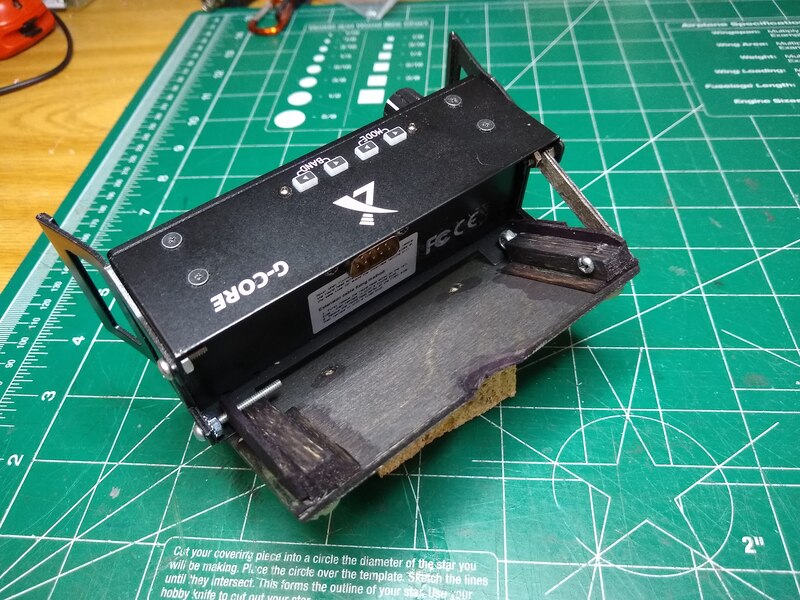 2020-04-19 On radios with internal tuners such as the G90 and x5105, the tuner is between the transmitter and the antenna, as if it were an external l tuner. The swr is read at the transmitter (including the sweep). Bypass the tuner and you see the swr at the antenna connector. Turn on the tuner and you see the swr as presented to the transmitter by the tuner. No different than how a rig sees swr using an external tuner that has a bypass switch.
2020-04-14 I installed the v1.74 firmware upgrade for my G90 this morning. It went well, once I realized I have to hit the spacebar immediately after powering up the radio. So far after a few QSOs it all seems good.
2020-03-15 I've been using my G90 as my primary rig in the shack for a number of months now and love it. I really have no complaints about it. I'm running V1.73 firmware with no problems. I use it most for CW, second most for SSB and almost none for digital. Until tonight. I decided to bypass the capacitors in the audio interface described below so now the rig goes directly to the USB audio dongle. Seems to work very well. In fact I had my first PSK-31 qso since last November with the modified interface using Ham Radio Deluxe DM-780. Got a very clean and strong signal report from the station in North Carolina. Nice long QSO on 40 meters. That was only my sixth digital QSO out of a total of 502, mostly CW ones, since I got the rig back in August of last year.Who knows, I may do a little more digital again!
2020-01-23 This evening I was reminded why I love lower power, simple antennas and ham radio. Bands have been not-so-good the past few days. Relatively high ambient noise and few signals. But as I tuned my G90 around 40 meters I heard this guy calling in CW  CQ de K3Y/KH6. His signal sounded kind of hallow and distant. And lots of people were calling him. So I listened for a bit. Sure enough he was in Hawaii! That's a rare one for me, only three previous contacts in all my 60+ years on the air. So after the fray settled I gave him a call. It took a bit but he got my call and we exchanged the essentials, 559 both ways, name and SKCC numbers. My setup? The G90 at 20 watts and a QRPKITS 40-20 meter dual band trap dipole. Simple but effective! It was worth the wait. 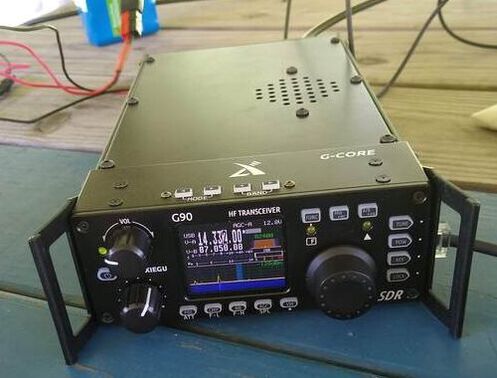 G90 on picnic table for its first outing! Checked into the YL System.
2019-10-31 Last week I upgraded the G90 firmware to G90_MainUnit_FW_V1.71_build002.xgf  and G90_DispUnit_FW_V1.71_buid003.xgf. The upgrade went smoothly and I recommend it. Overall it is just smoother to use, a bit crisper display and a few more functions including a simple bandwidth adjustment and an RF Gain adjustment.
I had problems setting the transmit audio level from my computer for PSK31. I had to reduce the Window 10 speaker volume to 1 and the Aux In on the G90 to 1 and then very carefully bring up the level in DM780. It was almost like there was no drive and then suddenly power output as indicated on the G90 power meter would jump to 20 watts! I don't recall the same behavior in v1.6. I was sending a CQ call to a dummy load to do the test. So I concluded that there must be a glitch in the Aux In routine in v1.71.
We'll yesterday I decided to put an external power meter in the antenna feedline. Interesting... 1)If I selected CW mode and hit the key both the G90 and external power meters read the power identically. 2)If I sent a js8call tune signal to the radio, both meters read the same and and the Aux In audio level was easy to adjust to keep the power out around ten watts. 3)If I sent an unmodulated PSK31 signal to the radio the internal and external power meters were a little different but the transmit audio level was still easy to adjust. 4)However, if set the power out to ten watts with the unmodulated PSK31 and then modulated it by sending CQ for example, the external power meter remained pretty steady where as the G90 power meter would bounce all over the place and pegging full scald most of the time. I repeated this last test using psk125 and the there was some deviation on the G90 meter, but the external meter was almost stable at the unmodulated level.
My tentative conclusion? The radio works fine. But the algorithm that drives the G90 power meter gets confused with a modulated PSK31 signal. The phase shifting and/or tone shifting rate of the PSK31 signal seems to throw the internal meter into a tizzy.
2019-08-29 Today I made up the digital interface pictured below and had a PSK QSO with my friend Gary, KD9KHI on my G90 using HRD and DM780. Rig control including PTT was handled by HRD through the interface cable that came with the G90. That cable has to be plugged into the G90's control head and NOT into the COM jack in the back of the G90. 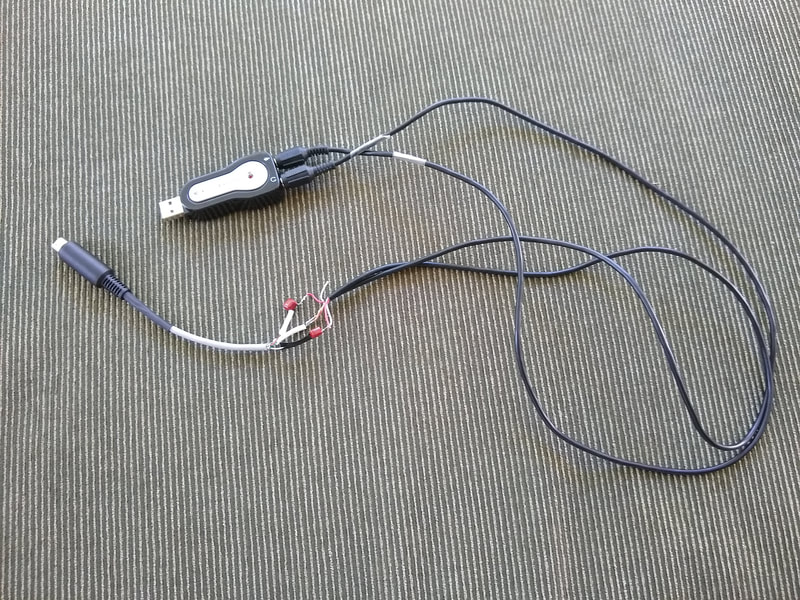 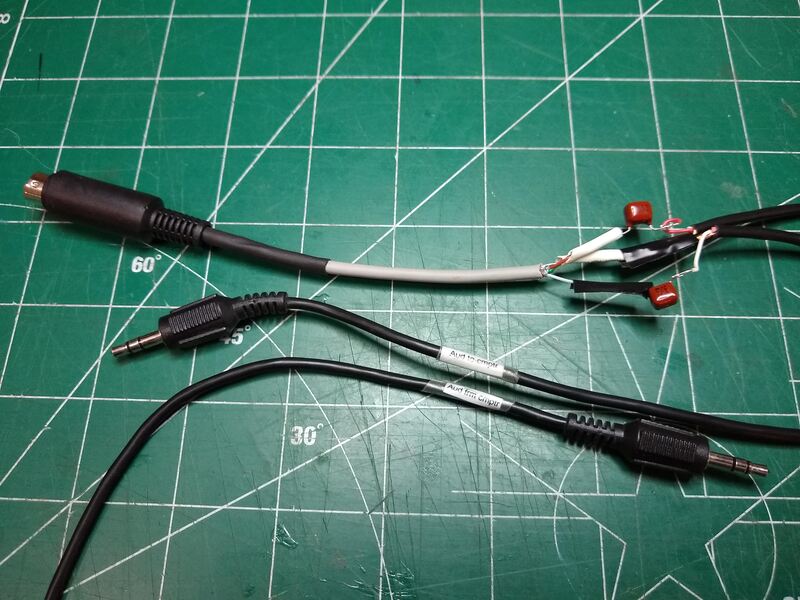 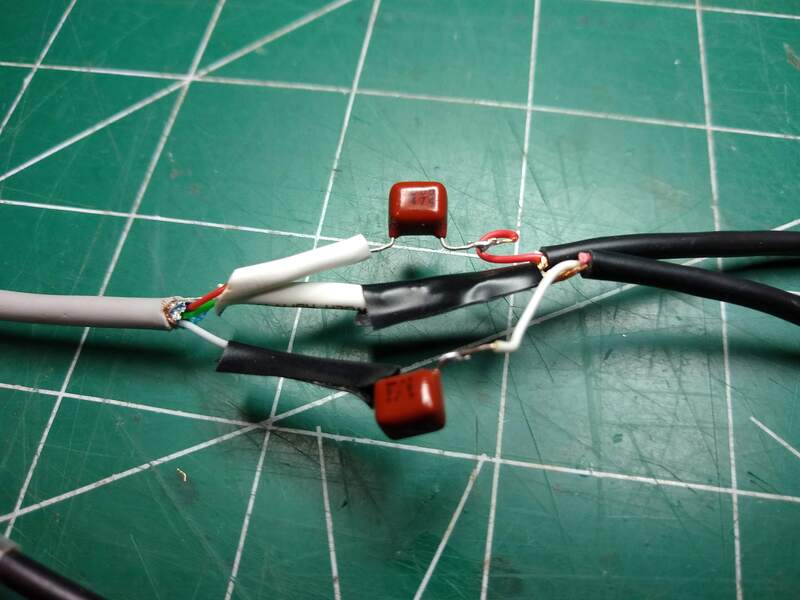 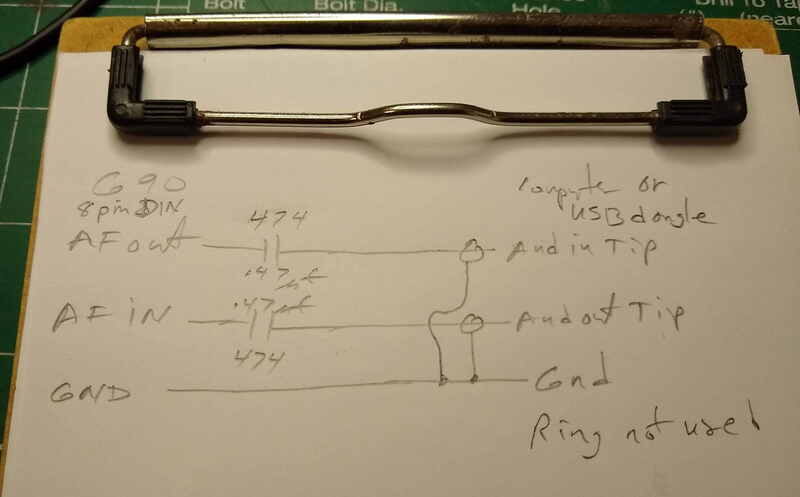