The pictures below show how I water proofed the center insulator and the traps using some pieces of sheet plastic and tie wraps. The final picture shows the antenna all wrapped up for transport. 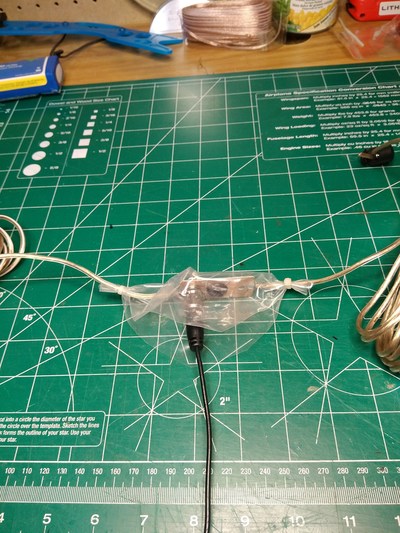 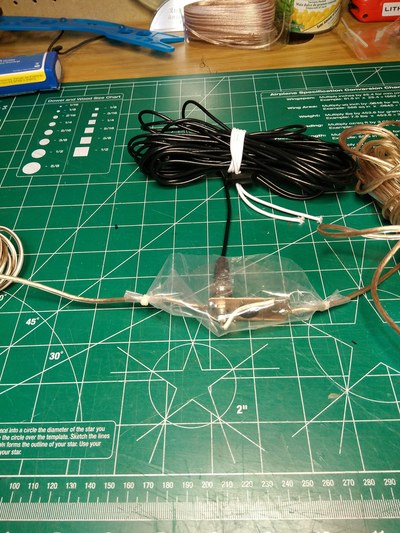 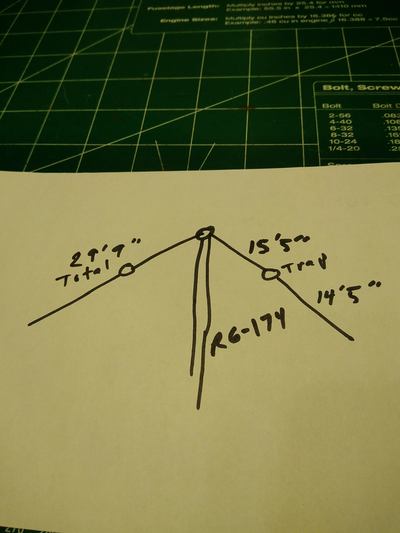 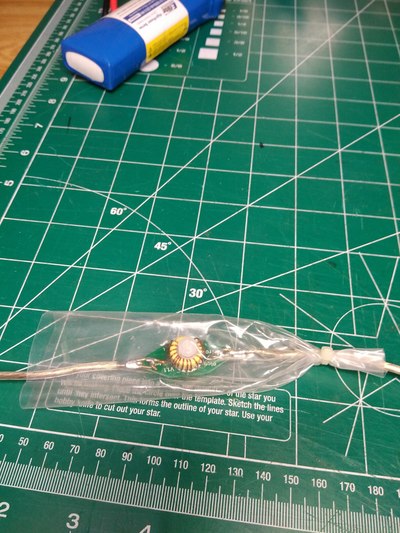 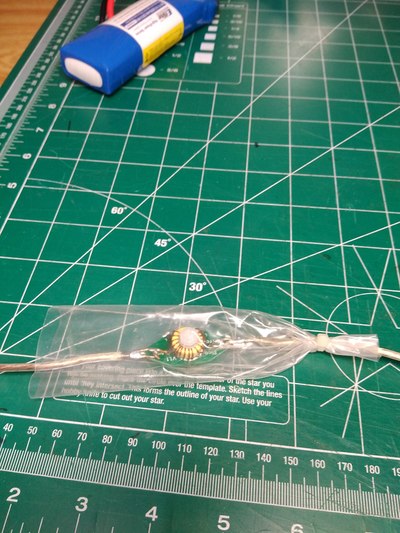 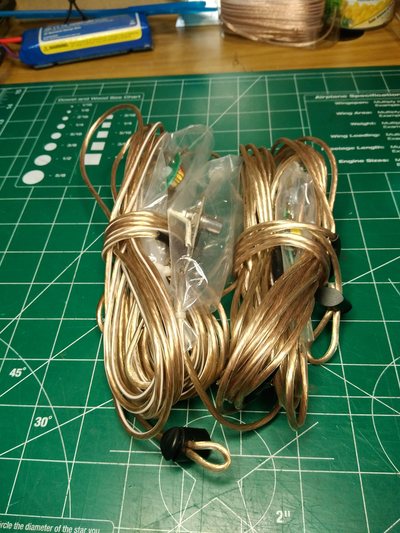 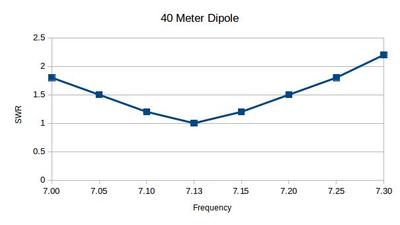 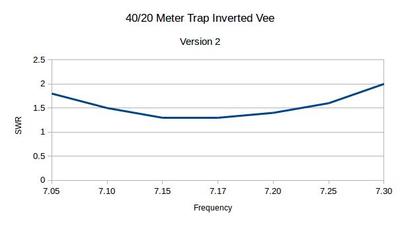 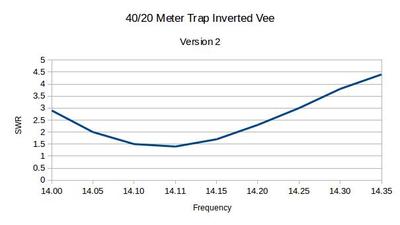 The leg lengths for the antenna above were 15 ft, 2 inches from the center connector to the traps and each leg was 29 ft, 9 inches from center connector to the end of the 40 meter leg extension. So the 40 meter extension from the trap to the end was 14 ft, 7 inches. The SWR at the top end of 20 meters is high but pretty much what is expected.
2018-06-05 As mentioned on my page comparing the trap and fan style antennas, the SWR of the trap antenna on 20 meters seems higher than I expected, particularly at the top end of the band. So I emailed Sotabeams to see if I could get some ideas to try to solve that. Richard G3CWI  (richard@sotabeams.co.uk) wrote back almost immediately, stating, "You would need to adjust the 20m section first then do the 40m one. Trapped dipoles are quite fiddly to get right." So I plan to give it another go and see what happens.
In the meantime I have concluded that the #24 RCA speaker wire is just too fragile for a practical antenna. So I plan to go back to the #16 or #18 wire for continuing experiments.
2018-05-24 Today I borrowed a MFJ-259B HF/VHF SWR Analyzer from my neighbor Jerry, N9AC and hung my antenna again. The lowest SWR Frequency on 20 meters was 14.032 (1.5 SWR) with the 3.0 SWR bandwidth being 13.963 to14.156. On 40 meters it was 7.215 (1.2 SWR) with the 3.0 SWR bandwidth of 6.925 to 7.44 . After some tweaking, the center frequency on 20 meters is 14.028 and on 40 meters is 7.224. My final dimensions are Center insulator to trap, 15'7". Trap to end 13'9". Overall leg length, 29'6" (one inch for the length of the trap.)
I then set up my Fan type Inverted Vee. It's center frequencies are 14.107 (1.1 SWR) with the 3.0 SWR bandwidth of 13.8mhz to 14.454mhz) and 7.07 (1.3 SWR) with the 3.0 SWR bandwidth of 6.75mhz to 7.35mhz).
My initial response is that the fan approach is superior, providing both a lower resonant SWR and broader useful bandwidth. I had a QSO with both antennas with W5FOC. He gave me a 599 on the fan antenna at about 2:45 on 20 meters and a 579 on the trapped antenna about 45 minutes later, also on 20 meters. I felt like the noise floor was a bit higher on the trapped antenna too but that is very subjective.
frequency. The impedance on both bands was 75 ohms according to my MFJ Antenna Bridge. Once I got it close using my MFJ Antenna Bridge I switched to my FT-817nd. On 40 meters, using the lengths shown above the FT-817 showed no SWR and put out full power from 7.005 to about 7.150. Above that is showed a couple bars of SWR and reduced its power output by one bar. On 20 meters it showed three bars of SWR from 14.050 to about 14.1 above which the number of bars went up. Its output power was reduced by one bar above 14.1. It's unclear what that means. I think I'll borrow my friends Antenna Analyzer and look at the antenna some more.
The bands didn't seem to be very good today. I heard W1AW's code practice and just a couple other stations but wasn't able to make any contacts. Was that the antenna? Who knows! But I don't think so. More to come, but I am pleased with everything except spending the whole afternoon running from one leg of the antenna to the other to trim the wire, then to the rig to look at the results.... You get the idea!
2018-05-22 OK, I got a bit more done today. I fabricated my center insulator, very similar to the one I made for my fan inverted vee. Then I got some speaker wire, heavier than I really need and cut it into calculated lengths for the 20 and 40 meter sections. I cut the 20 meter ones at 16' 9", just a bit longer than the formula suggested and very close to the lengths shown on the SOTABEAMS Pico Trap page. I cut the extension after the trap to 14' 6", referring to those same calculations. 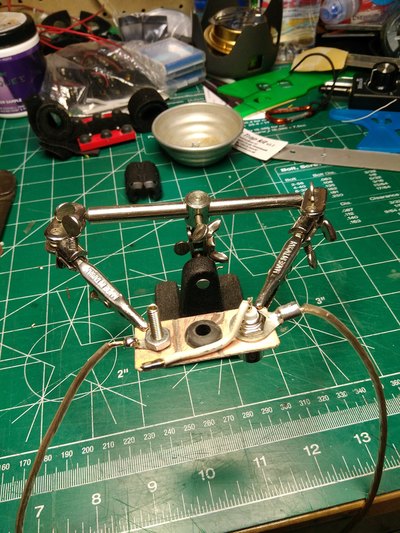 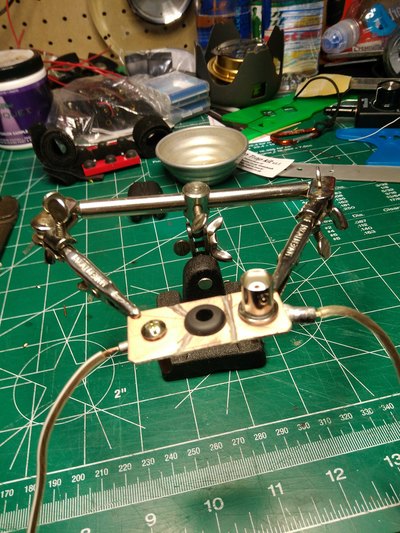 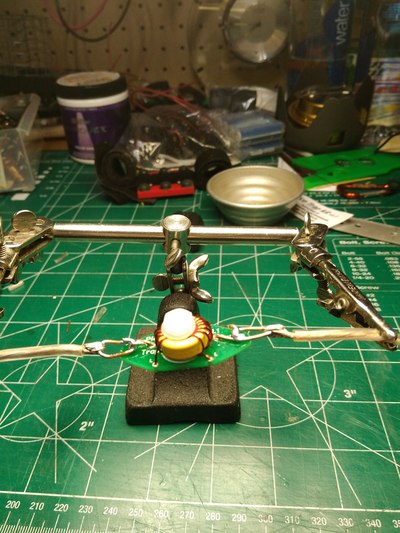 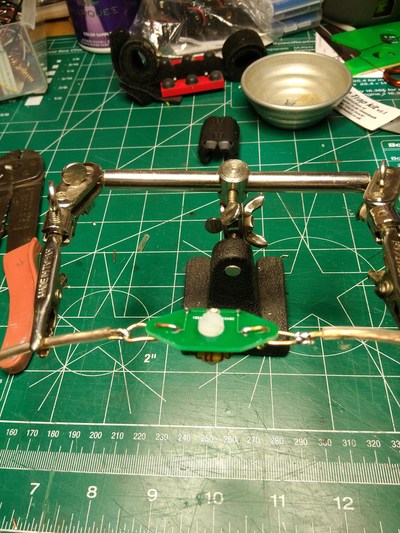 One concern I had was how to attach the antenna elements to the ends of the traps. The holes are very small and don't look all that rugged. I ended up fabricating a loop from #16 solid coper wire that I think will take the strain and can be soldered and unsoldered many times while I attempt to tune the antenna. I really don't have any idea how difficult the tuning process will be and at this point am uncertain how to go about it. I guess I'll start by getting the 20 meter legs trimmed fairly close them mess with the 40 meter ones. Should be an adventure!
My biggest concern was soldering the very tiny 100pf surface mount capacitors to the circuit board. I have a temperature controlled iron but couldn't find the tiny pinpoint tip recommended for soldering surface mount parts. I also couldn't find my syringe of silver based solder that I've used in the past. And the capacitors in the packet are small, about 1.5, maybe 2 millimeters long! The instructions suggest using a large tray to keep from losing the parts. GOOD IDEA. Those little capacitors would rather fly through the air than be soldered down. Thankfully I didn't lose the first one I tried, before getting a cookie sheet as it did fly out of my tweezers more than once, as they warned!
In preparation for building the elements for my trapped inverted Vee I went online to search out some help. One site I found may be helpful. It is Dipole, Inverted V and Ground Plane Antenna Calculators on Hamuniverse.com. Another interesting site is An Improved Multiband Trap Dipole. I'm not endorsing either but they look interesting. I'll see if they are helpful.