2021-10-15 ​My day started off at 7:30am at the dentist's office for a scheduled cleaning. Then a 2 burrito breakfast with coffee at McDonalds (to undo the cleaning). Since my dentist was Lake Geneva it was a short drive to K-1440 Big Foot Beach State Park to do a quick activation.
Set up my ic705 in the car and strung up my Km4ACK EFHW as a sloper instead of as an inverted vee, my usual way. The transformer hung from the driver's side rear view mirror by a short piece of 1/8" bungee. The far end was supported by my 20' carbon fiber pole resting in a tree, a trick I learned from a K8MRD video yesterday! It is so easy to simply lean the pole up in the branches of the tree. Why didn't I think of that?! Thanks, Mike.
Tried calling activators on 40 meters but the pileups were too big. So switched to 20 meters and landed two CW and one SSB activators in just a few minutes. Then settled down on 14,267 and started calling CQ POTA. grabbed another 8 SSB. Good signal reports on all. 30 minutes total and had to quit. Thanks to all.
I worked from inside the car because it was in the 40's and sprinkling on and off. One thing I like about the 40 meter EFHW is how easy it is to change between 40 and 20 meters. Just change frequencies on the radio and go! With all my other antennas I have to change a tap or link on the antenna as well. You get do more exercise but it is more hassle! 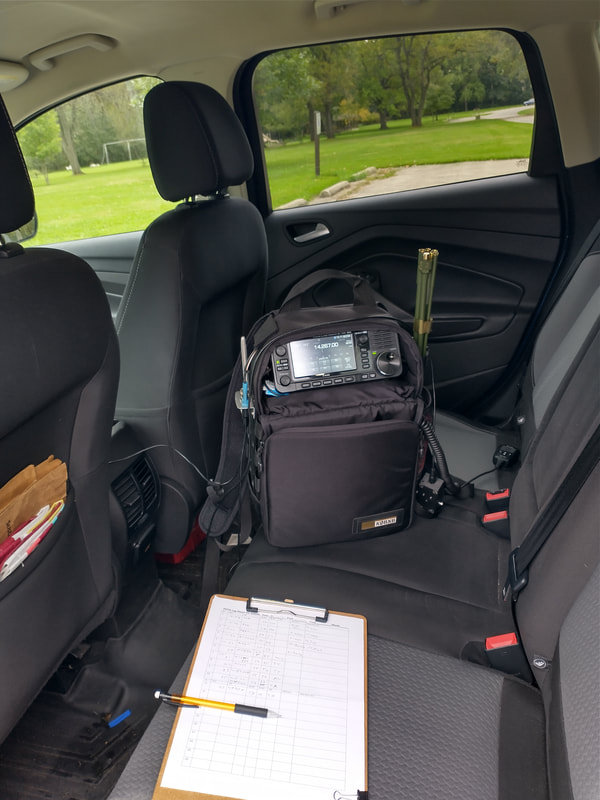 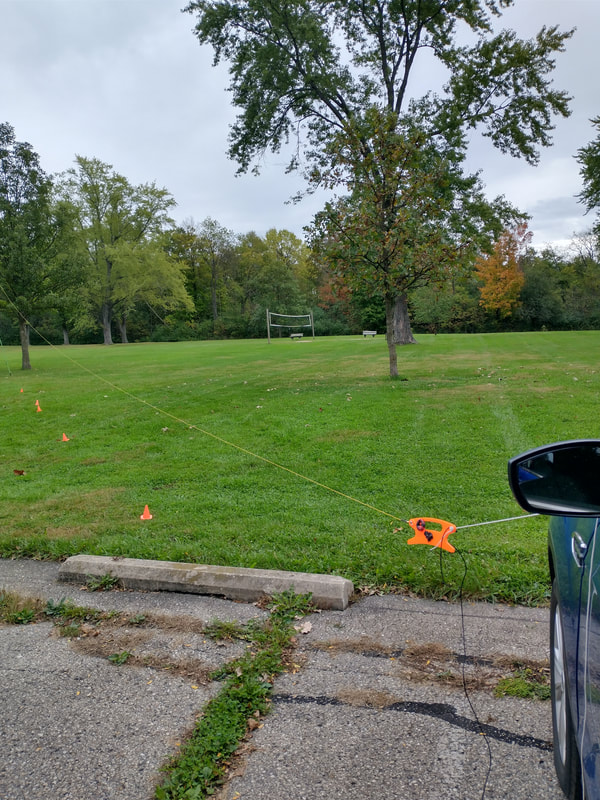 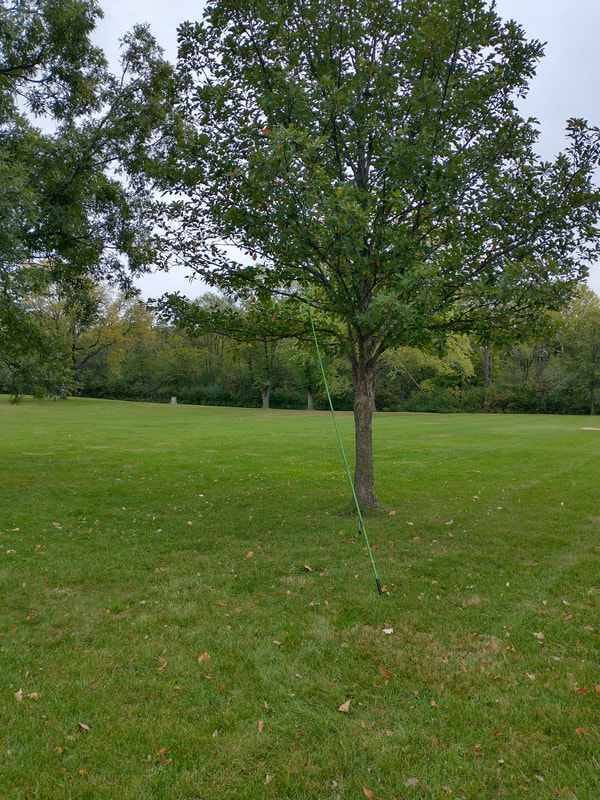 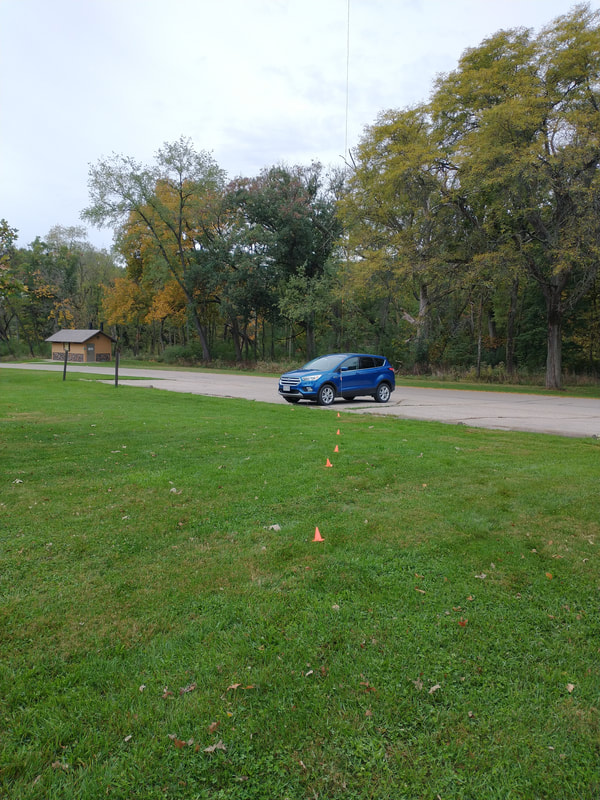 After about an hour I relocated to a very isolated spot but couldn't find anything to substitute for my antifreeze jug, so I tied it off to the mirror on my car. Seemed to work well as I got quite a few contacts on 40 and 30 meters.
I worked 20, 30 and 40 meters CW with 30 meters being most productive today. ​
Now I'm really in a quandary. The last three activations, at this park I used three different antennas! 1) DIY 1/4 wave 20 meter vertical with loading coil for 40 and 30. 2) Wolf River Coil vertical with 213 whip and set up for 20, 30 and 40. 3) Now this 29' wire. All three worked very well with my 5 watt QRP rig! Guess I'll have to carry them all so I don't have to choose!
So I switched to 20 meters, reposted and called CQ. After a bit W6LEN, 1700 miles west responded. He was followed by four others. Most exciting was when NL7V, 2300 miles away in North Pole Alaska responded! One more call and things suddenly dried up again! Fun day. Overall things were a bit slower today than on Saturday. Once again I was impressed that QRP and that simple vertical antenna make a practical portable station. And of course I feel that way because the hunters responded. Thanks again!
Just a quick observation. I set the antenna support under under the right rear wheel putting it and the vertical antenna just a few feet from me. Most other times it was under the opposite side front wheel, perhaps ten feet away. Is that important? Not sure but as I was using the antenna on 40 meters I was puzzled why the SWR as reported by the radio seemed to jump around as I transmitted, particularly using SSB. Then I felt a "hot stinging" on my finger while sending CW. I was holding my DIY mini paddle down with my hand and brushed my finger across one of the screw heads that connects to the ground-side of the audio cable between the radio and paddle. When I switched to 20 meters all was well. Reflecting since, I'm thinking I had RF getting back into the rig via the coax or whatever. Something to investigate. It took 18Wh or 1.3Ah to recharge the x5105 after the hour on the air.
​2020-11-05 Just got back from K-1440, Big Foot Beach State Park in Lake Geneva Wisconsin. Had 15 CW POTA contacts. Used my 5 watt Xiegu x5105 and QRPGuys 40-10 EFHW antenna setup as an inverted vee. Center support was my carbon fiber 20 ft fishing pole.
It was about 70 degrees and sunny. Way to nice to stay inside. After getting set up I spotted myself on the POTA website at 7.043. Just a few minutes later, on my second CQ got an answer and was steady for the next half hour. Total outing took about 2 hours including the 20 minute drive each way. The x5105 and EFHW antenna performed very well. I'm also once again impressed with the EFHW antenna. It is so simple to set up and does a really good job. I was also again reminded that QRP is a valid option! QRP also allows for a very small and uncomplicated gear package as the photos show. Thanks to all who contacted me 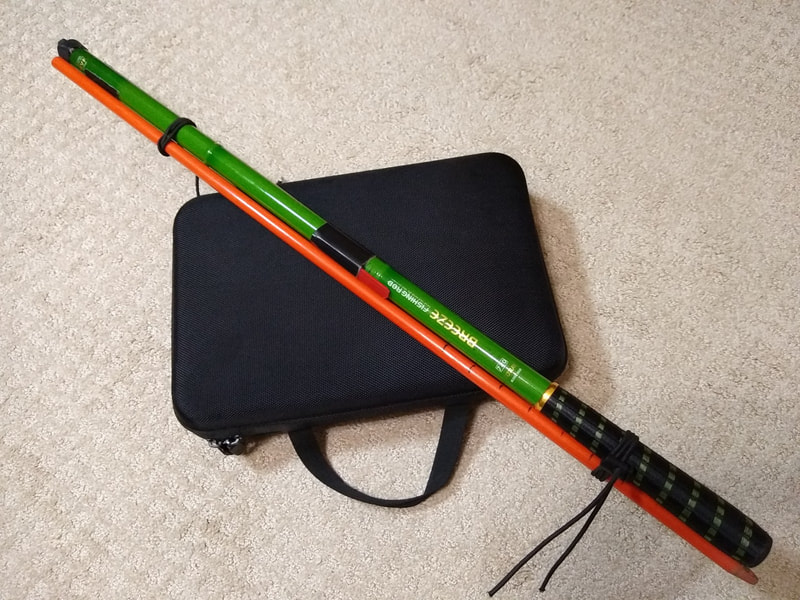 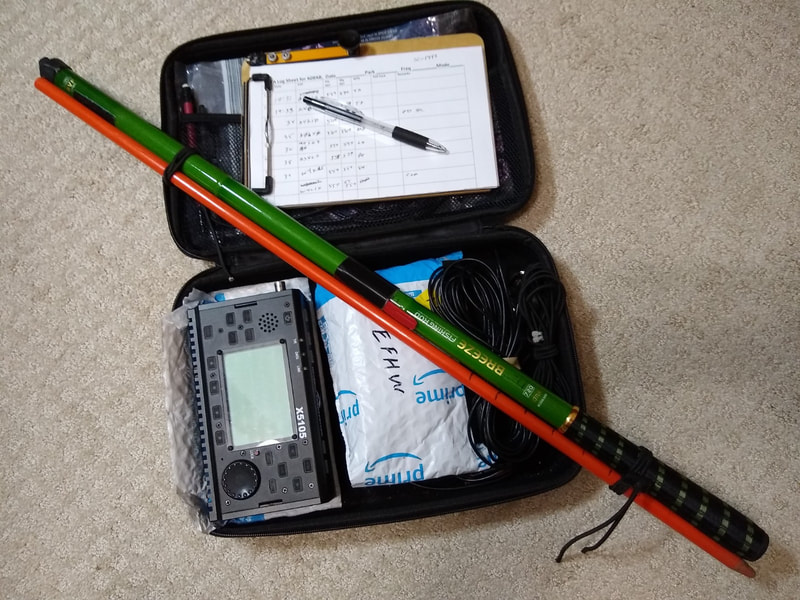 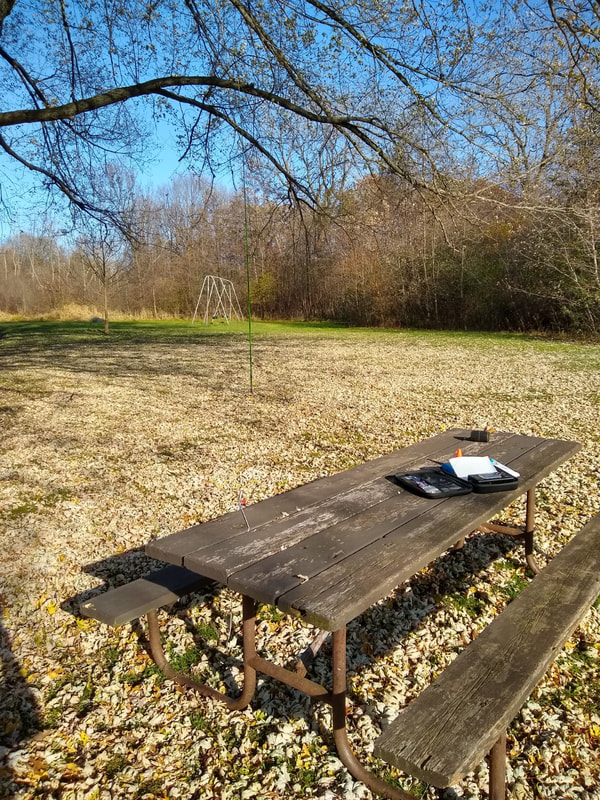 My QRP package as shown above based on the xiegu x5105 and EFHW antenna weighs five pounds. If I add my Bioenno 4.5Ah battery and cable the weight goes up to 6-1/4 lbs. That combined with the very small size of the package make it a good option over my xiegu G90 package which is about twice as much at about 13lbs. Both are great POTA rigs.
2020-09-29 Did a quick activation this morning at K-1440, Big Foot Beach State Park near Lake Geneva, Wisconsin. Objective was to check out my "kit" for an upcoming hoped-for canoe trip in the Boundary Waters Canoe Wilderness Area in northern Minnesota in 2 weeks. Setup was a g90, QRPGuys EFHW inverted vee.
​Checked into MIDCARS on 7.258. Steve offered to spot me. Started calling on 7.243 and in about an hour had 15 in the log including one P2P! And almost all gave me 55+ reports. Think the kit works!
I shut down as the 45 degrees, clouds and wind off the lake were too much. Really fun. Thanks everyone. K0BXB (forgot to take pictures!)
Here are a couple photos of the backpack and gear I had with me for this activation. Contents: G90 & detached Control head, Two Miady 6Ah LIFEPO4 batteries, QRPGuys 40-10 EFHW and QRPGuys 3 Band Vertical antennas, CW Key and Mic, two 25ft and one 4ft lengths of RG-174 coax, two power cords, extra fuses and cables for key and headset, a 50ft length of small cord for tossing into a tree, two 15ft length of 1/8in bungee cord for supporting the antenna ends, a 20ft collapsible carbon fiber fishing pole mast with a spike for mounting it and four 4in orange cones to mark antenna ends. Pack weighs 13lbs. The spike is 1/2 of a fiberglass snow marking post. The pack is a Red Rock Outdoor Gear pack I found at a thrift store. Not shown is my paper log clipboard, pens and pencils in a gallon zip-lock bag in a sleeve on the back of the pack. 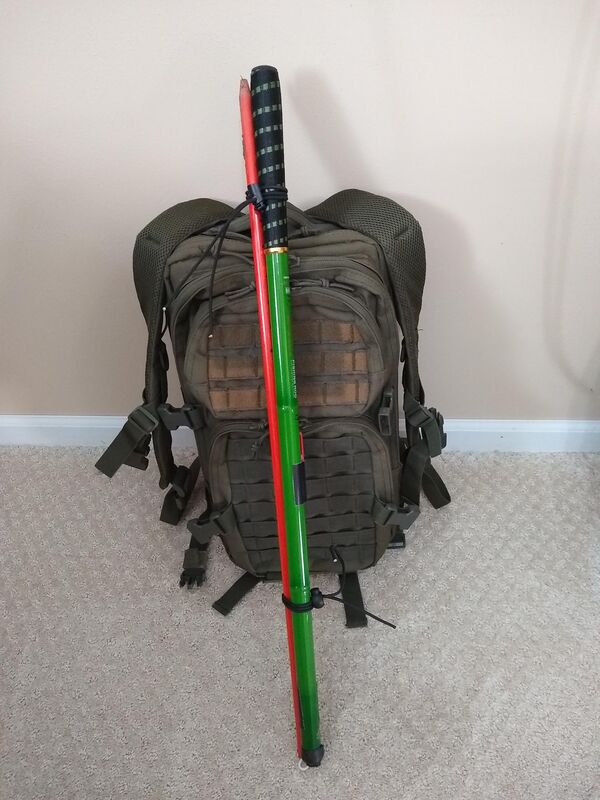 My POTA/portable kit is constantly changing but this worked well yesterday. Didn't use the second battery, headphones, key or vertical but it's good to have backups and options. Regarding the batteries, the radio does not consume much power and I've operated with just one battery for about a day of CW and SSB. This activation was entirely SSB. I did also have a DIY collar, guy lines and tent pegs in case the ground wouldn't accept my spike but I much prefer the spike. 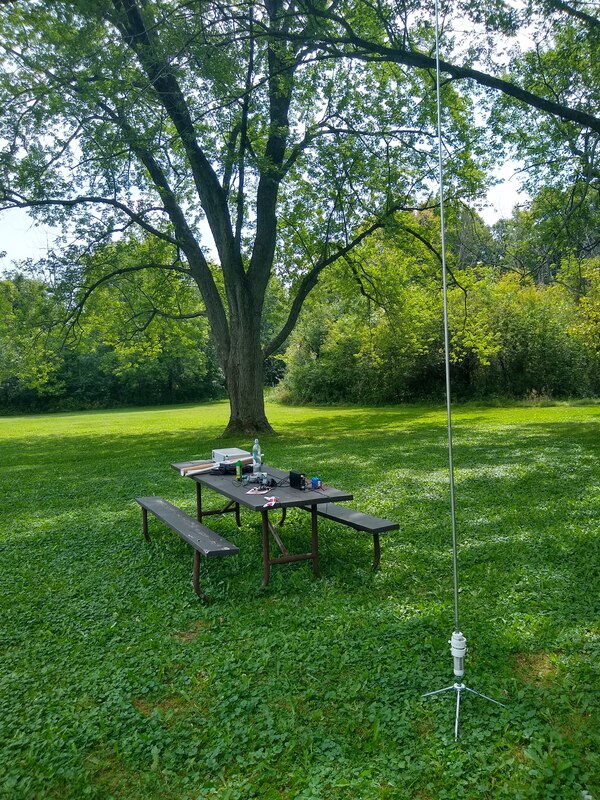 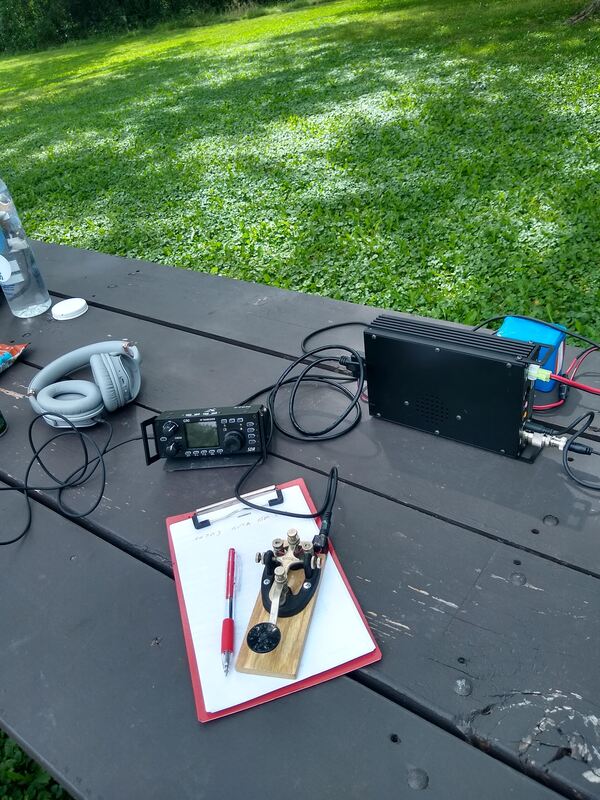 2020-08-29 Yesterday about 10:00am I drove the 20 miles from our home to Big Foot Beach State Park, POTA K-1440, on the outskirts of Lake Geneva, Wisconsin. It's a beautiful park with a lot of camping opportunities and trails. Very wooded and well kept. I set up my G90 on a picnic table and my Wolf River Coils portable vertical antenna nearby, in a large mostly open area with some beautiful large trees. It was warm and breezy and in the shade, quite comfortable - except for a few mosquitoes and way too many biting flies!
Had 18 contacts on 20 CW. Seventeen of them gave me a 449 or better. One gave me 339. Logged a station from Germany and another from The Azores who found me on the WWFF facebook page. I bypassed the WRC coil and adjusted the whip to resonance. Used the three supplied 33' counterpoise wires. The coil was at the bottom. Good SWR. The rig was my Xiegu G90 at 20 watts. Very pleased with how everything performed. My CW was a bit corrupted now and then thanks to those darned biting flies! Thanks to all who called me and to W6LEN spotted me both on the POTA page as well as the KFF and WWFF facebook page's. My cell service wasn't good enough to self spot.
This activation went smoother than my first one two days ago at the Bong State Recreation Area as I was more relaxed. Had to end abruptly as it started to rain. Total on air time just an hour. Took another 10 minutes or so each to set up and break down. Too much fun! Now to get the log submitted! Oh, I'm already thinking about where my next attempt will be!