2020-11-07 A few hours ago I received a text message along with these pictures from my son that said, "I'm sorry to have to report that your Escapade is dead!) His had crashed a few weeks ago and since I no longer fly I gave him mine. It survived the crash I had with it a few years ago as the picture below shows. But I don't think it survived to live again this time! 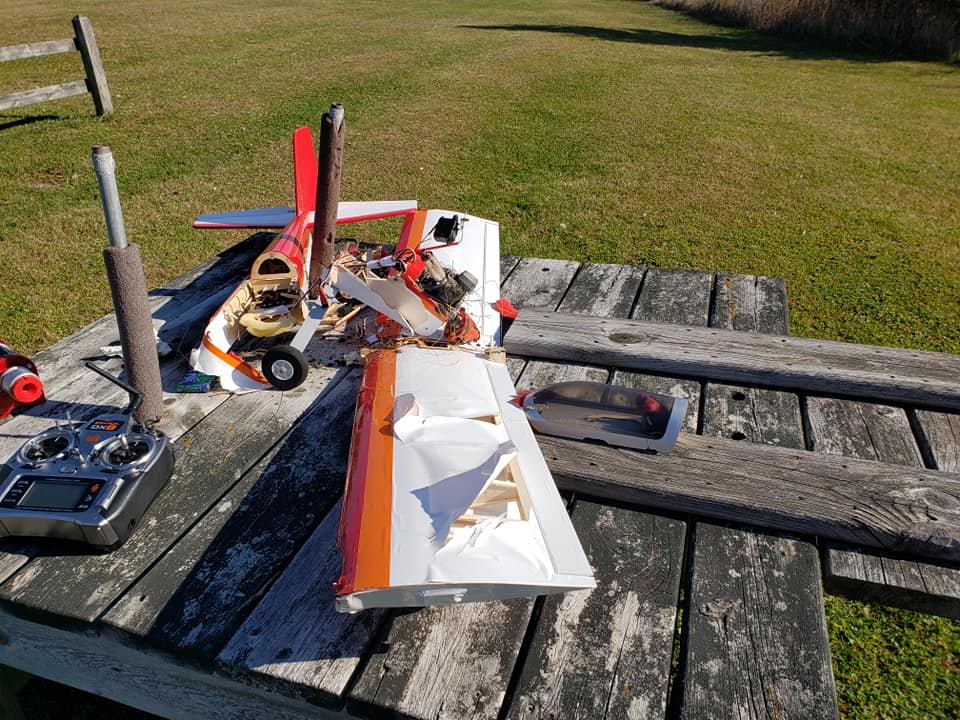 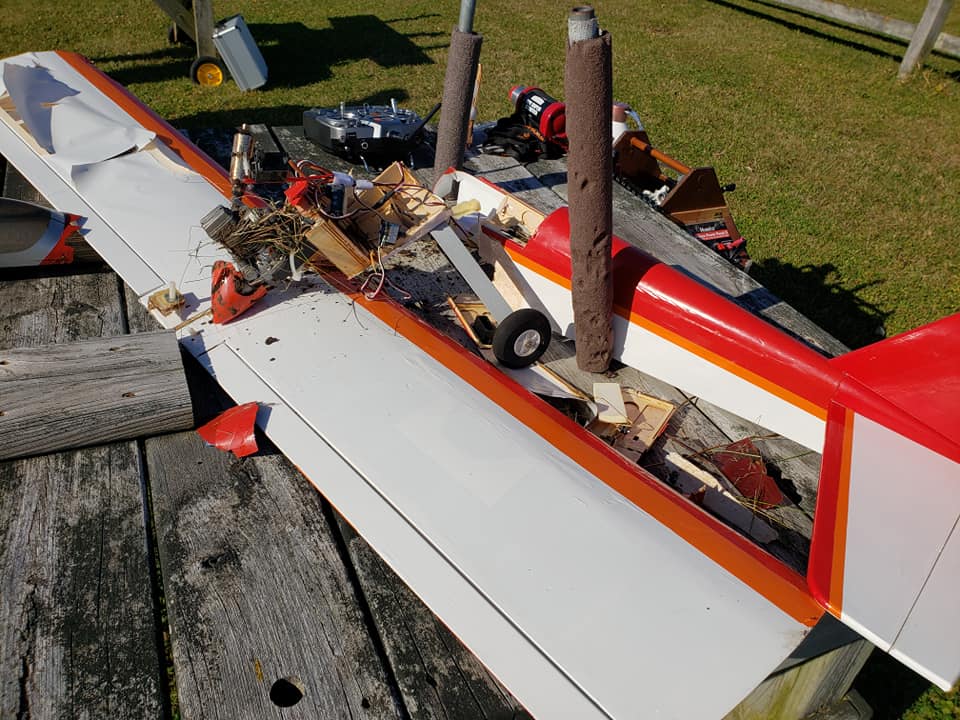 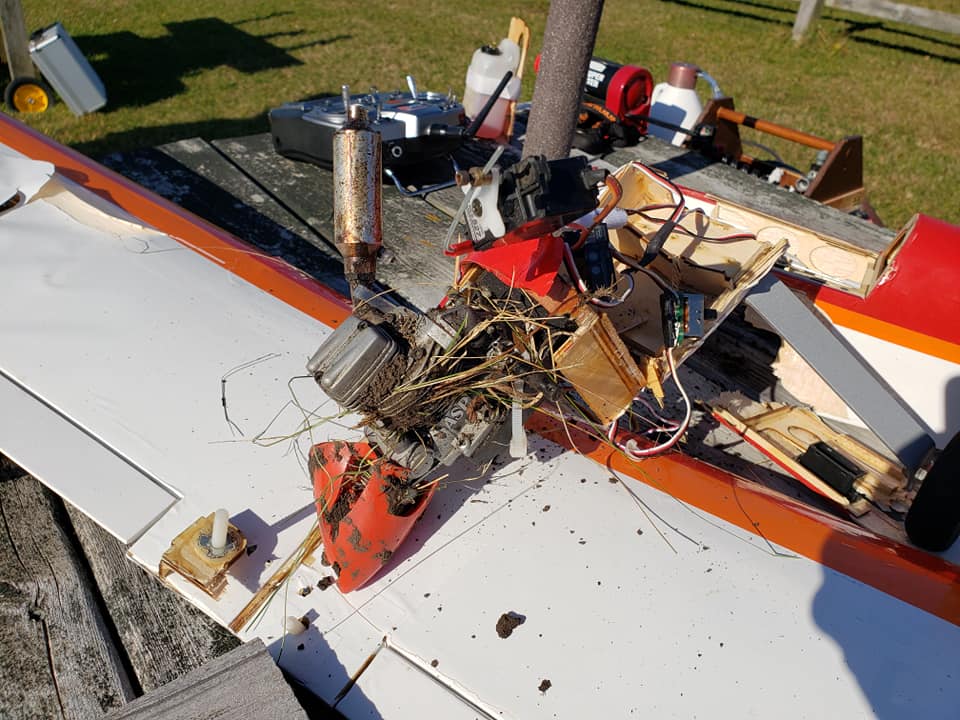 He is a good pilot. And he gave me my first RC plane and got me into the hobby which I enjoyed for a number of years before my eyesight turned it into stress rather than fun. So I'm glad he got several months of fun with it. It has now gone the way of all RC planes.... Sad, but it's kind of like life. One needs to be ready to die all the time!
2015-11-12  Can't recall when I took the plane out again after I got the aileron servo replaced, but I did. It took off well and I flew it several times. It is a very nice flying plane. On the last flight (by definition) I decided to practice slow approaches, not touching down but hitting the throttle near touch down and going around again. I did that several times when, getting too comfortable I waited too long and then cartwheeled it. The firewall was ripped out and a couple dings to one wing. I think it is all repairable but for now it is back on the rack in the garage. A shame that such a nice flying plane spends so much time in the shop! But there is always next season....
2015-08-29  Met my son yesterday at our flying field around 10:30am. It was overcast and a bit threatening with rain showers forecast for later in the day. I mounted the wing on my Escapade, turned on the transmitter, then the plane and checked the controls. The left aileron didn't move! Oh yes, I had not checked it at home with the wing mounted... dumb trick. So back to the bench when I got home. I took the servo apart and found what I suspected, teeth from one of the little plastic gears floating around inside! Fortunately I had an identical servo on another wing that I wasn't using so that is now repaired.

I did fly the PT-40 which ran perfectly, as it has for several years before. Amazing what a little split in a fuel line can do! It's raining today so it will be a while before I can give the Escapade another opportunity because my wife and I are going on an Alaska land/sea cruise for twelve days.
2015-08-27  Well, I decided to go back with the stock landing gear - after fabricating one from wire. I beefed up the area where it mounts quite a bit with three layers of 1/8 inch plywood. Now we'll see what happens. I committed to only smooth landings!
2015-08-25  A couple years ago after getting somewhat comfortable with the Great Planes PT-40 trainer I ordered their .40 sized Escapade. I put a .52 ASP 4 stroke engine on it and had fun flying it. It is a very nice plane to fly, stable, quick, just plain fun. I've had several different engines on it since and as I wrote a few weeks past totally destroyed it in a take-off stall. But I got it repaired and back in the air. Only to crash land it a few weeks back by coming in too steep and fast. The only damage was the lading gear. As I put it on the bench a couple days ago to see what it would take to put it back together again I was impressed that it potentially has three structural or design problems for a guy of my flying inability. The landing gear is completely rigid, no "give" whatsoever. So in the event of a hard landing the fuselage has to deal with ALL of the stress of that which leads to the second weakness.
The landing gear, made of 1/8 inch thick hardened, rigid aluminum is 7/8th inch wide at the mounting point and mounts to a plywood sheet cemented into the fuselage which is itself only 1-3/4 inches wide. So all the torque of the landing gear has to be withstood by that little 1-3/4 inch connection to the fuselage. The third issue is that the gear struts are individual, that is separated so that the plywood sheet to which they are mounted not only has to handle the backward torque of a hard landing but the middle must not separate. In my case it did both, split in the middle and the twisted out of the fuselage. With minimal damage to the fuselage, by the way. Under reasonable conditions and a good landing that is probably more than enough. But if you come into the field too fast and as too much of a downward angle the likelihood of breakage is fairly great. 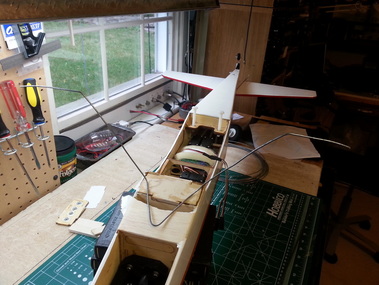 I fabricated a replacement for the broken plywood, cleaned off the old cement and using epoxy glued it into the fuselage, proud of my quality work. Then it hit me. I forgot to drill the mounting holes and epoxy the surface mount nuts to the underside which was not completely enclosed.... What to do. Thinking about that it hit me that a more flexible landing gear would be desirable and after looking at other planes and thinking about the problem came up with a design for a wire landing gear patterned after the approach used by Flitetest.com on their Baby Blender. I've made a mockup of "bailing wire" and will not attempt to bend up the actual gear. It won't look as pretty as the original but should have some forgiveness for hard landers like me! Will keep you posted....