​From there we continued east and north on S Boundary Rd. to the Porcupine Mountains Visitor Center and Headquarters to get our camping permit. It was good to talk with the ranger about the trails, our plan and get some helpful information, including a little better map of the trails including campsites, etc. Then, after filling our water bottles and using the flush toilet, we jumped back in the car and drove the couple miles to the parking site on the south side of 107th Engineers Memorial Hwy at the start of the Government Peak and Escarpment trails, the beginning of our hike. It was about 2:30pm.
​That first night's campsite was a little disheartening. It was the second of three along and near the south side of Lake of the Clouds and would have been much better except for the recent rains and ice. And being so early in the season, cleanup had not been done. But we reminded ourselves that this is a “wilderness park.” Probably the biggest "challenge" was that there was no latrine near the site! There was one on the first site but that required going back quite a way over the long, sloppy tangled trail. Fortunately, only one of our party (I won't name him) had to do the cathole thing. That, it turned out, was the only place where that was necessary! 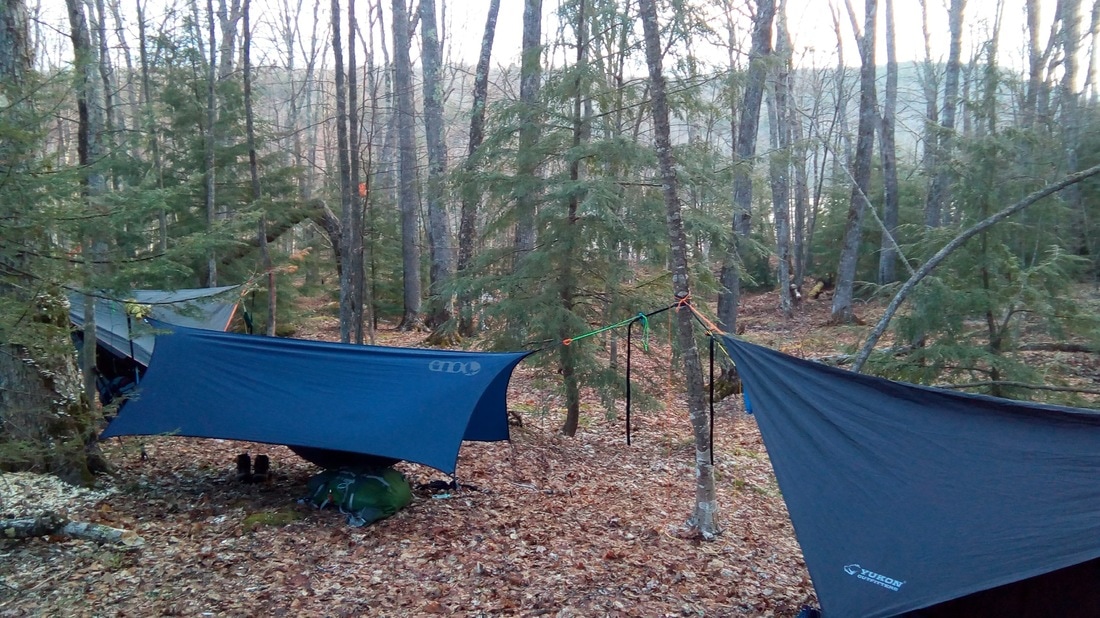 Day 1 Hammock setup at the Lake of the Clouds campsite. This is the only photo I managed to take of the campsite. Looks better in the photo than I remember it!
​This was the first time any of us had set up hammocks "for real!" We had all set them up in our back yards and “slept” in them at least part of a night. John and I had actually managed a whole night in some woods near his place on Easter weekend. But there is something fundamentally different about "hanging out" near your house and warm bed, from doing it out in the real woods, hours or days from ANY OTHER possibility of housing!
​Initially we selected trees too close together which became obvious when we tried to put up our tarps! In addition, just as we were finishing that first setup, the wind off the lake picked up and we were concerned it was going to be a miserable, windy night. So, we decided to move up the hill further from the lake and a little deeper into the woods AND to find trees that were adequately separated. But John and I tied one end of each hammock to the same tree, not bad except that tree turned out to be a bit too small. So, whenever one of us moved in our hammock, the other felt it!
​Then I, the more practiced of the lot, chose a way-too-small tree for the other end of my hammock. Being somewhat stressed out by then, I didn't even think to sit in my hammock 'till bedtime. That's when I realized that this "little" tree, though wasn't likely to break, did bend so that my butt was only about six inches off the ground! We tied that tree to a larger tree with success, in that I didn't land on the ground. But (no pun intended) I was still way too low! Even with all that, we all slept surprisingly well and stayed warm. I'm guessing it dipped into the 30s.
​Being in my age bracket, and having a couple other life realities, I had to get up three or four times during the night to tend to business. Besides the sense of relief, those ventures into the forest also kind of reassured me that the bears or other vicious wild creatures were not going to get us as there were no eyes to be seen anywhere in the cold, dark surrounding woods. Except for preferring to be in my nice warm hammock, those ventures into the quiet moon-lit woods were quite pleasant. And each time, I fell back asleep quickly. It was a very good first night in hammocks in the "real wilderness." So, ended the first day and night! Oh, by the way, before we had finished relocating our hammocks due to concern about wind, the wind died down and it was a very calm night!
We had PackitGourmet’s Texas State Fair Chilly for dinner that first night and desert was Caramel flavored instant pudding. I had put the pudding mixture in a plastic bag along with some powdered whole milk so by just adding cold water (which was plentiful), shaking and letting the bag sit, it turned out really creamy and tasty. A nice way to end dinner in the wilderness.
​We traveled 4.4 miles with an average speed of 2.3 miles per hour. Our maximum altitude was 1,560 feet and our lowest was 662 feet so we gained 938 feet. And the steepest grade was 72.6%.
​Day two started about 6:00am. Our food was untouched on the bear pole (a very nice feature at all the sites we stayed in). The campsite was just as we had left it the night before. And John had water hot for coffee on his Jetboil stove. Life was good.