2018-07-02 Since Field Day a couple weeks ago I've been thinking about how to make the transceiver connection, including the balun more "setup friendly". The support post shown below clearly works (or would have if the trees had cooperated at our Field Day Site!). But it is one more thing to carry and looks very "cobbled up." It dawned on me that I'll likely have my Wonderpole mast with me when I am operating portable. So something that I could attach to the lower section of it could serve as my transceiver connection to the 51 foot wire as well. That would save taking one more bulky thing out to the field and would make it fairly easy to have both an inverted vee AND the 51 foot wire set up. That's the background for the photos below of my solution. 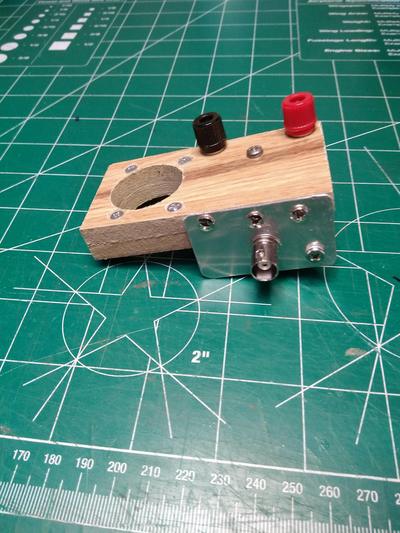 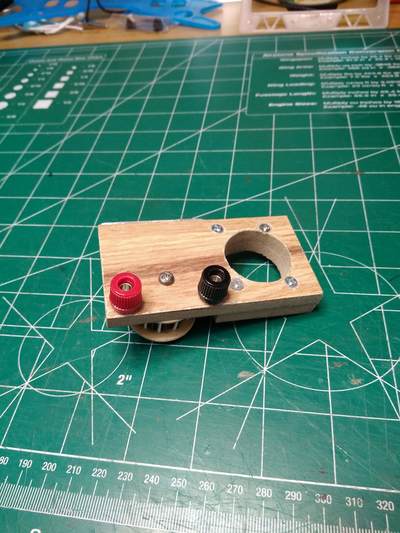 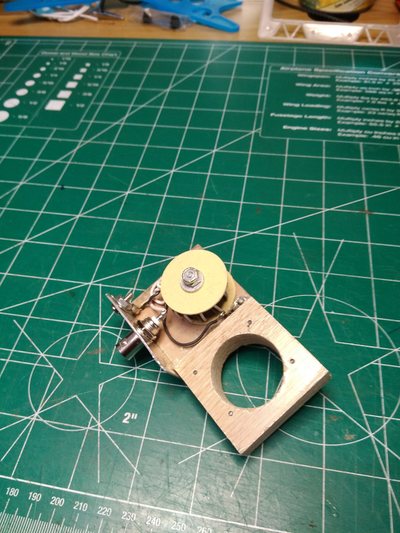 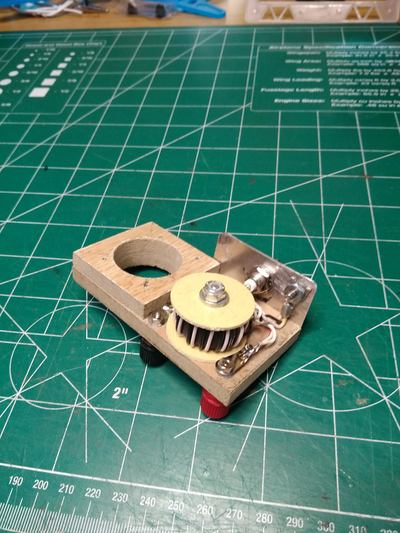 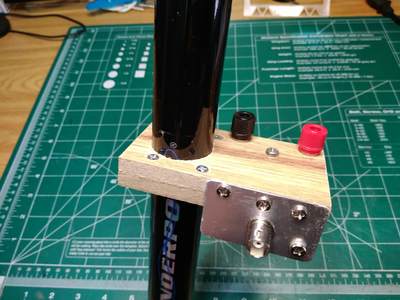 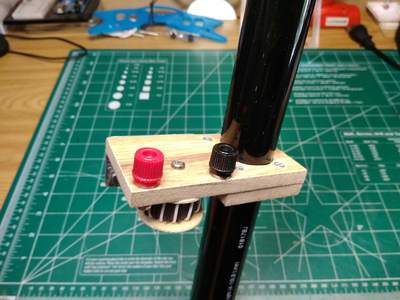 Like the post pictured below this thing connects the transceiver with a BNC cable to the antenna via a 4:1 balun. And it fits nicely over the top portion of the bottom section of the Wonderpole. I found some old banana jacks in my junk box so used them for the antenna and counterpoise connections. Not sure I'll like those but they allow various actual connecting options so we'll see. One of the more complicated part of making this was drilling the hole the right size to fit somewhat snugly on the Wonderpole while allowing it to be removed when not needed. We'll see how that works out. The material for the "board" was left over Pergo flooring from out flood rebuild. Hope its RF qualities are not a problem!
2018-06-20 This antenna along with my 40/20 trap style inverted vee will be my two antennas for Field Day, June 23-24.
2018-06-11a The bands have been up and down all day. But this afternoon and evening I was able to make five contacts with the 51 ft. end fed, two on 40 meters, two on 20 meters and one on 30 meters. They were all respectable in terms of signal reports with stations 500 to 800 miles distant. With one station in Kansas I was able to do on-air comparisons with the fan inverted vee. The inverted vee was noticeably better in that situation but both worked. I used the LDG-Z11ProII auto tuner on three of them and my  Tuna Tunah II manual tuner on one of them.

My 40 inch post with balun to support the "driven end" of 51 ft. long wire. The right end is flattened to make it easier to drive into the ground. The BNC connector provided an easy connector for coax from the tuner. 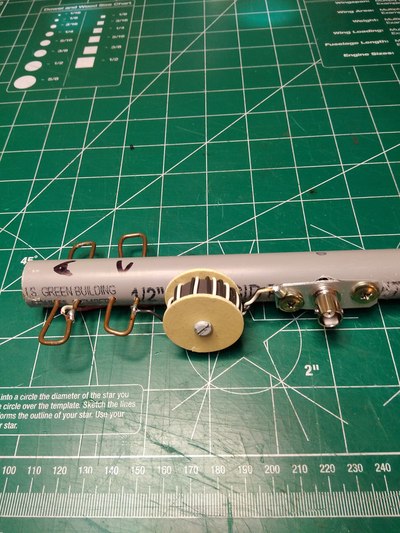 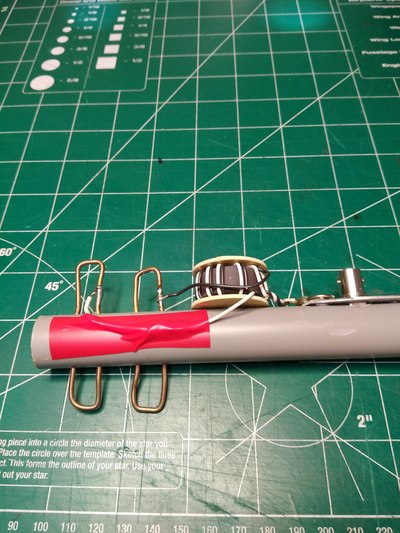 I discovered in my junk box a 4:1 balun from an old MFJ tuner I disassembled some years ago. So I fabricated a post from PVC electrical conduit with the balun attached to use in the field. I can just attach a cable from the radio to the BNC connector on the post and using alligator clips attach the 51 ft. radiator and 16 ft. counterpoise and be ready to go.
2018-06-11 This morning I strung up my 51 ft. end fed wire antenna to a tree in the back yard and using the LDG RBA-4:1 balun that came with my LDG-Z11ProII auto tuner connect the radio in the shack. I also strung out on ground beneath the antenna a 16 ft' counterpoise. Using the auto tuner it tuned up nicely on every band from 80 through ten meters! The bands were almost dead quiet so I wasn't able to make any contacts, but it sure tunes up nicely! I did have two solid QRP QSOs earlier this morning, one on 40 and one on 20 using the Fan Inverted Vee. But shortly after the bands went quiet. All that to say I think either the Fan or trap 40/20 Inverted Vee AND the 51 ft wire give me excellent options for field day.

Initial information about and experiments with the 51 ft wire

Both bands appeared to be dying so I was totally surprised to make contact. Both were calling CQ. So far I am liking this 51 ft random wire with about 15 feet of counterpoise just tossed on the ground, or rather dropping about five feet from the window sill and then lying on the ground. The 51 ft wire goes from the same 5 ft window sill to a tree in the yard with the far end perhaps 20 feet up.
I've now had seven solid SSB and CW QSOs on 40, 30 and 20 meters, all using five watts and the Tuna Tunah II tuner and am convinced this is a sound antenna. It is hard to compare it with others and say that it is better or worse but it clearly works, is versatile and is simple, providing you have a tuner. Clearly it is a good candidate for the backpacking trip to Glacier.