2018-10-16 Yesterday I saw a YouTube video of a guy using a fiberglass push up pole wound with about 35 feet of speaker wire in a portable situation. It looked fascinating so today I wound 35 feet of #24 speaker wire on my Shakespeare TSP20 Six-Piece Wonderpole. It took a couple tries to get it all on in a somewhat even fashion. The pictures below show the result. I connected it to the 5:1 unun that I used with my 17 ft vertical wire antenna and used the same 35 ft counterpoise. So everything was the same as with the 17 ft antenna except the radiator itself which is twice as long, wound in the same space. 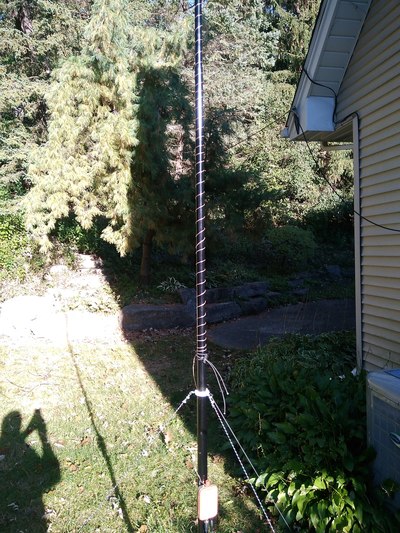 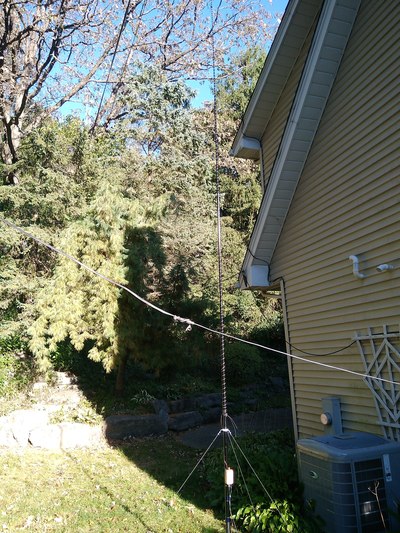 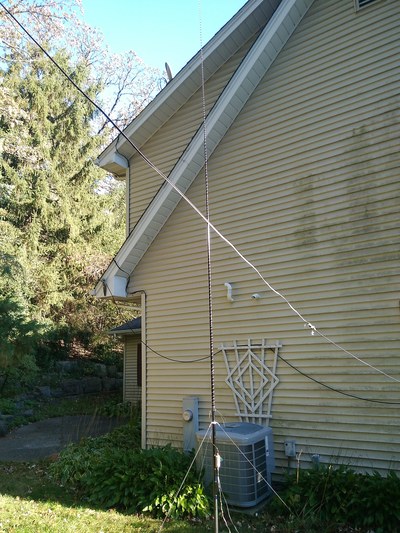 Looking at SWR it is similar to the 17 ft vertical with a flat 1.2:1 across the 40 meter band, a 1:1 across the 30 meter band and 1.5:1 on 20 meters. For the fun of it I replaced the 5:1 unun with a 4:1 balun and checked again, with very similar results, only minor changes.
But the real issue is will it work? Of course that is subjective but around 4:30pm I had a reasonable 20 meter CW QSO with AC7AF in Wyoming, just over 1000 miles to the northwest. He gave me a 429 and he was 559 in here. He was running 100 watts to an inverted vee, I was running just five watts to this antenna. We had a 100% exchange even though it took some repeating. At about 8:00pm I had a 40 meter QSO with W4WRE in GA. It was kind of rough. He gave me a 429 and he was about 559 here. But we exchanged SKCC details! No tuner on either one and the SWR was below 2:1 on both.
So, it works. How well? That is impossible to say as I didn't repeat the QSO on another antenna or even switch to another one to see how he sounded. One observation about both it and the 17 ft vertical is that the band noise is somewhat higher on those than on a dipole or even on my G5RV. I think it is also fair to say that signals are generally one or more S units lower on the verticals. That being said, It could be a useful in-a-pinch antenna. Probably not a candidate for a base station primary antenna unless that was the only reasonable option. And I'm not convinced the extra wire and work of winding it is better than the 17 ft vertical. More playing will be required to form an opinion on that. But I'm happy with the experiment whether I ever do it again or not!