2022-05-21 For a couple weeks I've been wanting to try using the 9ft whip with my QRPGuys 9:1 unun in place of the tapped loading coil. Today was the day. I simply cut a piece of PEX water tubing, and put tubing plugs in each end. I had drilled and tapped the plugs with 3/8-24 threads so I could mount it on my ground spike and screw the 9ft foldable whip  in the top. Then I "haywired" the 9:1 unun in place, attached the four ten ft radials and coax and connected it to my Elecraft T1 tuner which in turn was connected to my IC705. It tuned nicely on 40, 30 and 20 meters. and I managed one SSB QSO with a POTA operation in NE Nebraska on 20 meters. I wasn't in a position to do any comparison checking and I forgot to take any photos of the setup. But the photos below show a more "permanent" fabrication of the 9:1 Unun and PEX tubing. 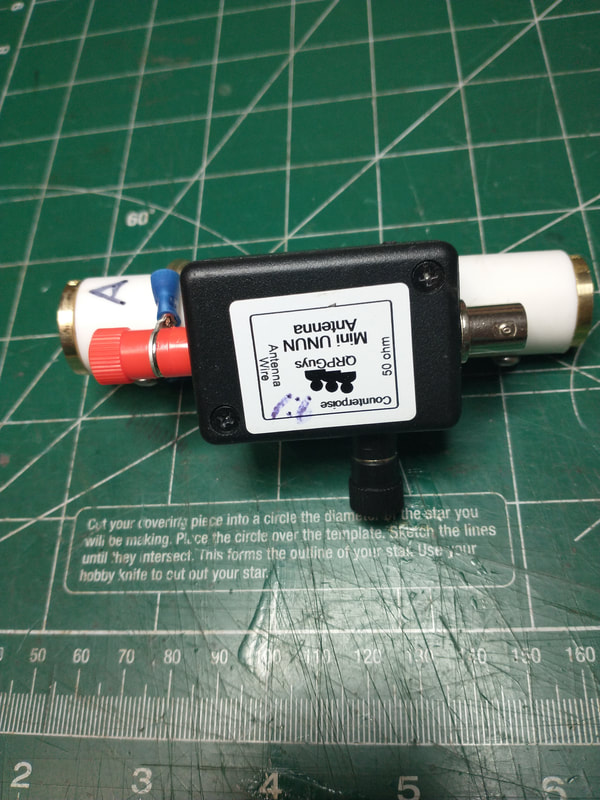 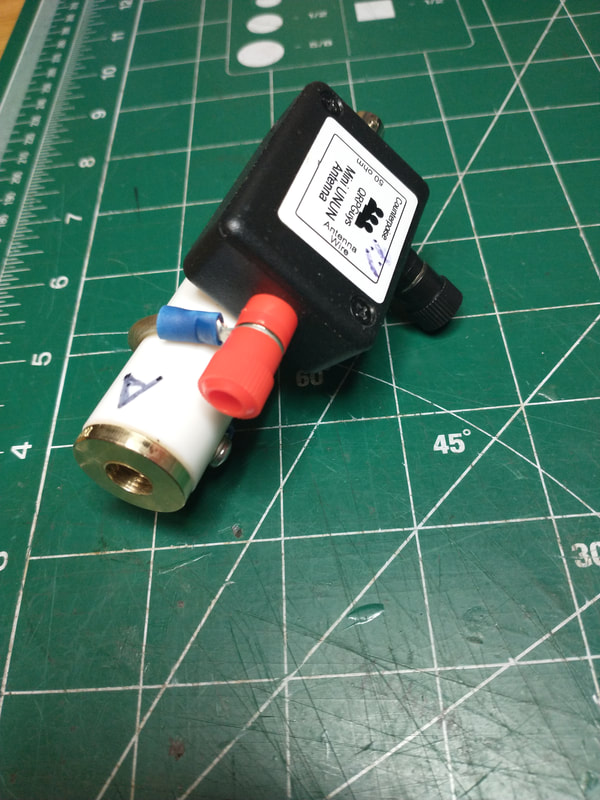 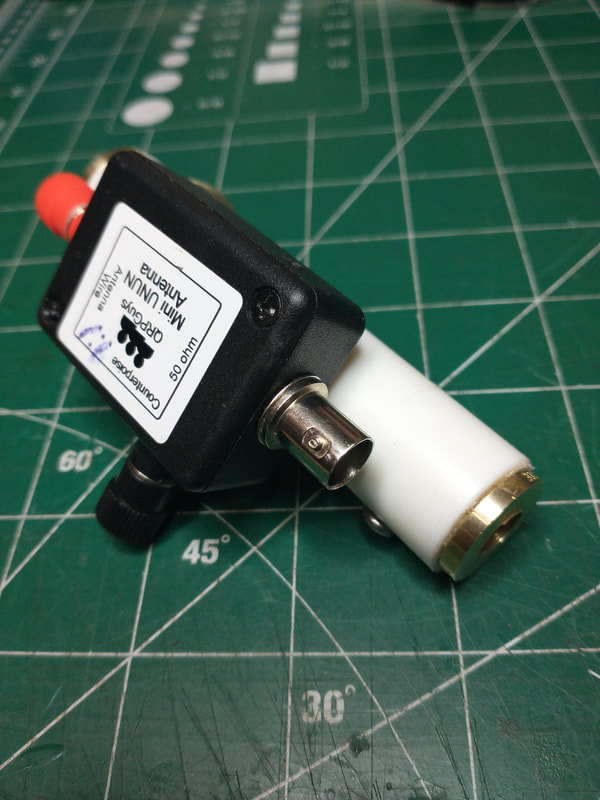 Hopefully I can do some testing over the coming days.
I'm always on the prowl for lighter weight, smaller sized, easier-to-set-up multiband portable antennas! But then who isn't"? I've spent a lot of time making wire antennas, both horizontal and vertical and most perform well. Wire antennas require some kind of support. Might be trees or more often for me, a push up fiberglass or carbon fiber fishing pole. Verticals can be made "free standing" if you can come up with a suitable tripod, drive-on stand or something. And they work well. With a bit of work winding and adding taps to a loading coil they can be multiband. I have one that is 1/4 wave on 20 meters. The loading coil has taps for for 30, 40 and 60 meters. And the vertical wire has links for 18, 15, 12, and 10 meters. It performs very well on all those bands for a vertical. But, it requires carrying the fiberglass pole and tripod separately from my radio bag. Not a big deal but my goal is having my whole portable kit, including the antenna, in one bag. Using guy ropes and tent pegs gets me close! By the way, I have, use and love my Wolf River Coils TIA antenna. It is very close to the "best" portable antenna our there, especially for the money.
2022-03-18 There are those who have trouble with this kind of antenna, feeling it is way too ineffective. I've logged 431 activation contacts with this antenna ranging from Europe to Wisconsin on 40 to 17 meters, all at 10w or less since Aug 2021. I know it's not the best antenna but it's also not the worst. I'm focusing mostly on portable use where size, weight, ease of deployment, are all factors. I don't want hams, particularly new hams, to be scared off by "perfection." There are a lot of reasonable, achievable, rewarding options.
2022-03-11 Today was a great day. Even though it was only in the upper 20s and the wind was blowing at about 25mph or more, the ground was thawed enough here in SE Wisconsin at k-4265 that I could use my 12" stake to hold my DIY 9 ft bottom loaded whip upright. It was nice not to need a tripod for it after a long winter! Got 21 contacts in my activation today. Six SSB. fifteen CW. Five P2P. One in France, one in Belgium and one in Italy. All at 10 watts on 20 meters with my IC-705. And thanks to the sometimes sun, it was almost cozy in my car! Sorry, failed to take any pictures. Thanks to all 21 hunters and activators who worked me. I have to say that 9' vertical is one of my favorite antennas. easy to transport and deploy and it just works, every time! Here is a link to it.
2022-03-05 I did take this antenna on our just completed trip to AZ and did an activation at K-4429 Coronado National Forest just outside of Tucson. The antenna performed perfectly. The only changes I made to the antenna before going was to replace the tripod legs mentioned below with three threaded 18" legs. They looked a little better and took up a bit less space in my carry-on bag. My conclusion is that this is real workhorse antenna. Whatever compromise their may be in on-air performance is more than made up for in ease of setup and transport. TSA gave me absolutely no grief either in Chicago nor Tucson.
2021-10-21 The antenna described below works very well on 40, 30, 20, 17 & 15 meters and is one of my go-to antennas. But it requires ground soft enough to push in the ground spike. With winter looming here in SE Wisconsin the ground will soon become solid, rendering the ground spike unusable. So as a stop gap I decided to add a DIY PVC stand to my DIY drive-on stand. Consists of a simple cast iron pipe (chose that as it's cheaper than PVC and not much heavier) floor flange, a ten inch 1/2 inch PVC nipple and a 1/2 inch PVC to hose adaptor as shown in the photos. My 3/8 inch ground spike fits perfectly into the adaptor. I haven't used it on the air but set it up in the driveway and all looks good. Now all I need is a couple really hard freezes!
2021-08-15 We'll, I have another POTA activation antenna! Not like I need one.... But that's not the point! It's based on the 9ft HF Manpack Collapsible 7 Segment Whip Antenna sold on Amazon. I got it because I'm constantly looking for a small, lighter, easier to set up and more portable antenna as part of my POTA kit.

The 9ft foldable rigid antenna weighs just 13oz and folds down to 18in. Even has an attached Velcro strap to keep it together when collapsed. It along with my DIY coil with taps for 30, 20, 17 and 15 meters and four 10ft counterpoise wires weighs just 20oz So it is very packable. It will fit in and on my IC-705 bag along with 25ft of RG-174 coax.
​
Spent the last 2 days making and tuning my coil. Then used it to hunt POTA activators from home with my QRP rig Am pleased with the results. Hunting while portable, even in my own yard is almost as much fun as activating! Hope to activate with it this week. 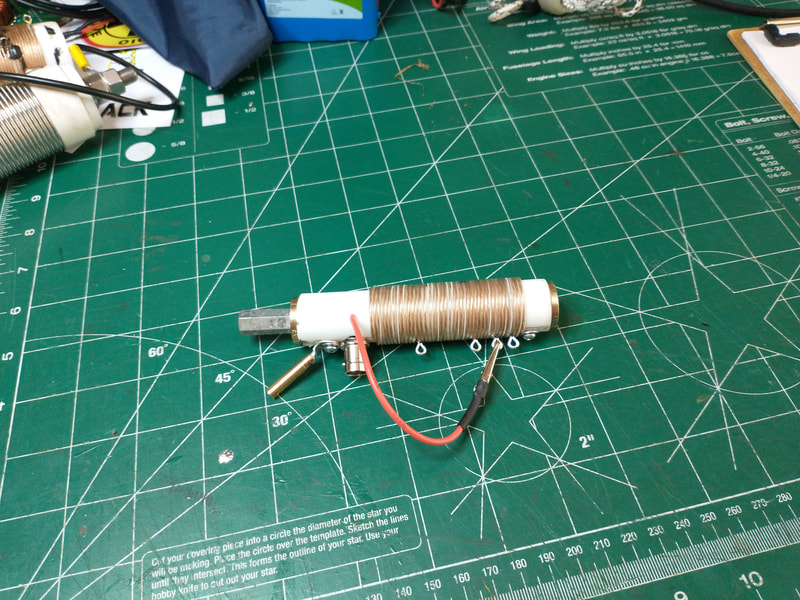 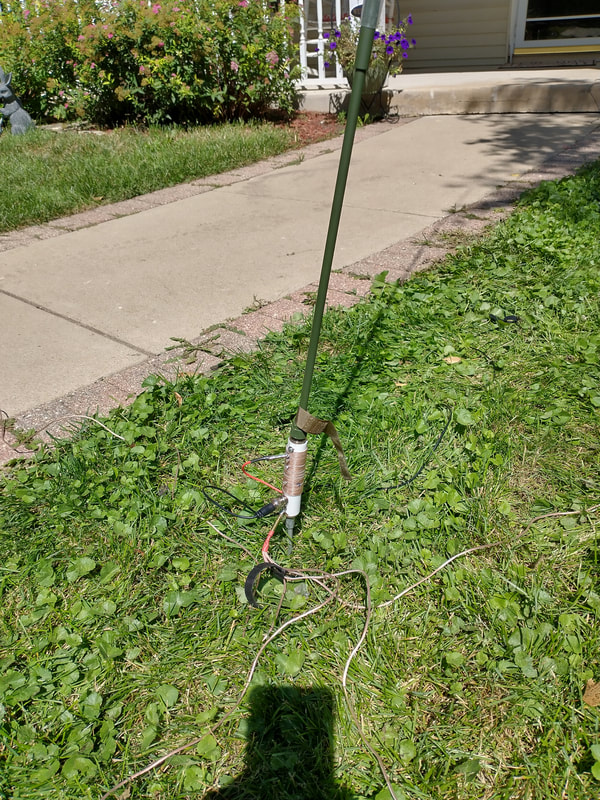 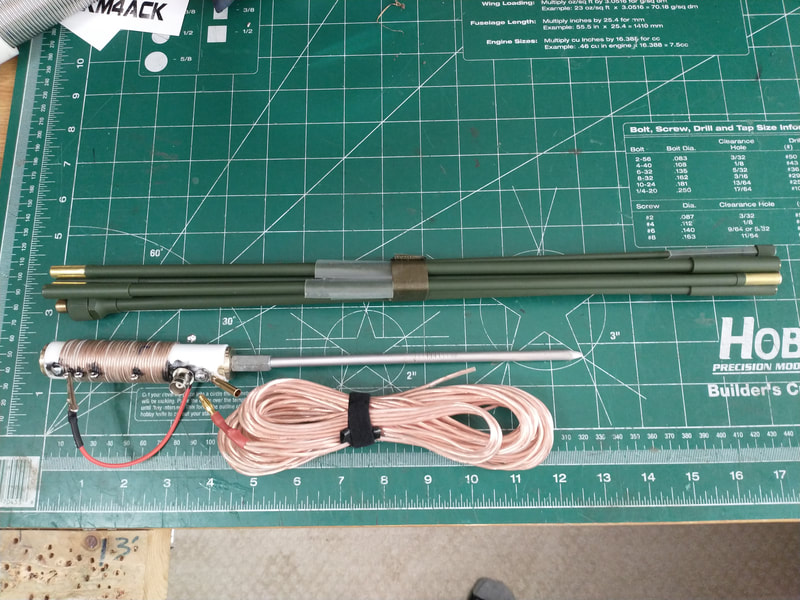 All I needed to achiever my one-bag goal was a small loading coil and a way to set up the antenna. Mulling over both the coil and a way to mount it my thoughts went back to the QRPGuys DS-1 short vertical I had built a year ago. It met my objectives nicely except for performance. It performs well for what it is, a very short HF vertical. I have logged 27 contacts with it on several bands. but it simply doesn't compare with more "full sized" verticals such as the Wolf River Coils TIA or some of the wire verticals I've made. But the design of the DS-1 coil is simple and easy so I decided to use that concept that make my own.
The completed antenna broken down for carrying is shown in the photo above. The foldable whip is at the bottom. A 3/8x12" ground spike is next. Then the coil and finally the four ten foot counterpoise wires cut from 24 gauge Silicone insulated Wire. The whole thing weighs 1.4 lbs. Add the 25' of RG-174 coax and ready to connect to the radio it weighs 1-3/4 pounds. And it works. I've logged 48 contacts in the last five days. All were at 10w or less from nearby parks during POTA activations. Two were over 1700 miles west with stations in California, one on 20 and one on 30 meters.
If you want to make one I suggest you download the building instructions from the QRPGuys web site for their DS-1. I cut my coil form six inches long. My coil is wound using one strand of RCA 24 Gauge speaker wire. Refer to my DIY version of the DS-1 to see how I wind and assemble and "tune" my coils. Those techniques are used here. One change I made on this one is to use 3/8-24 hardware rather than 1/4 inch so it would be compatible with the WRC and other standard mobile antennas. The pictures below show the parts and details of the completed coil. 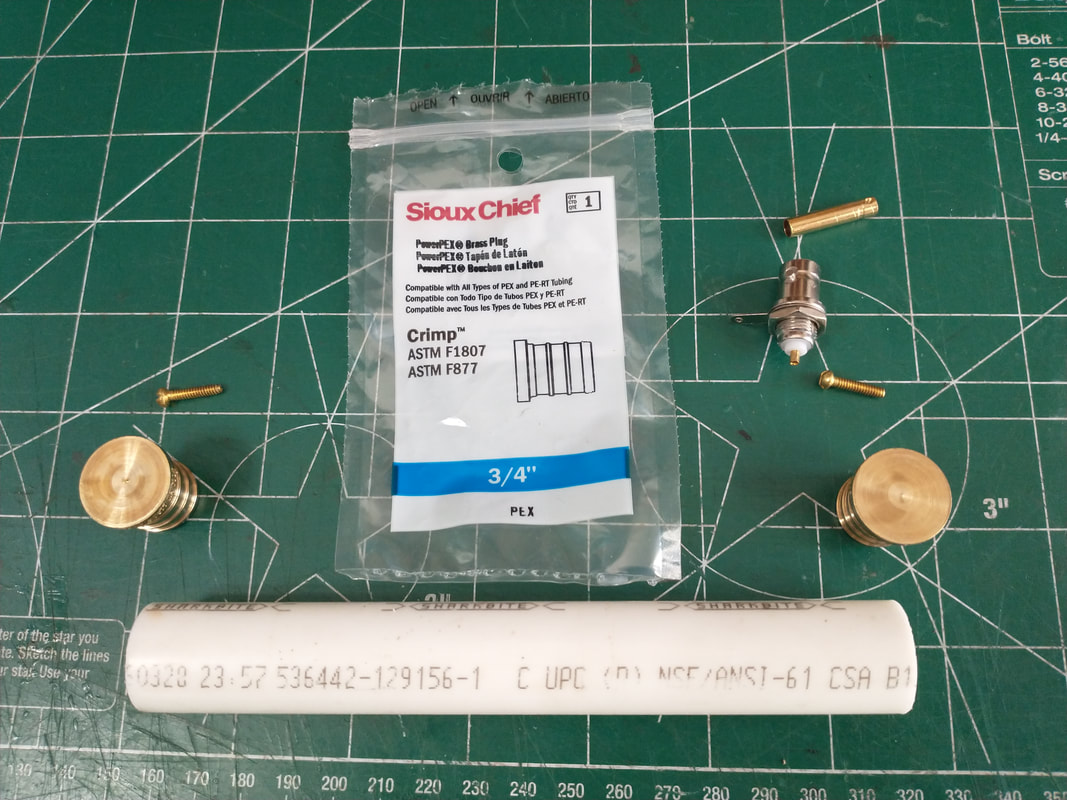 Here are a few observations. You might consider using schedule 40 PVC or something a bit more rigid than the PEX tubing I used. The reason I say that is that with the 9' whip the very small amount of flex in this PEX tubing allows the top of the whip to lean over a fair amount. I don't think that is a performance question. A down side to a rigid vertical like this (as opposed to the push up type) is that if you need to change the length (resonant frequency) a little, you are in trouble! The taps are "fixed" and you can't change the length of the vertical. To tune the coil, that is to find the tap locations, you really need an antenna analyzer. Personally I really like my little NanoVNA. Since it will sweep a very wide frequency range it is easy to just poke a straight pin into a turn on the coil and see how far off resonance that is and which direction you need to go to find resonance. Even an analyzer that is confined to just the ham bands is less than satisfactory for me. So using your rig to do the tuning will likely be a long process. Finally, if you don't really WANT the small size of the coil, then I suggest simply screwing the whip onto a Wolf River Coils or similar coil. Than simply move the collar until it is resonant on the desired frequency. Building and tuning the coil is not simple. You'll need some tools like a drill press, and taps and dies to thread the end caps, etc. But it is rewarding when done!
Hope this is helpful.