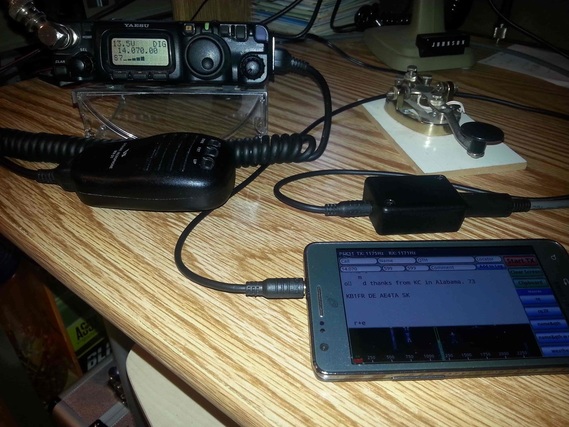 Setup for the QSO with W4FGA. Galaxy S2 phone in foreground running DroidPSK. Wolphi-Link interface behind the phone and the FT817nd in upper left. The Tuna Tunah II tuner is out of the picture.
5/12/15  Having upgraded my Android phone recently to a Samsung Galaxy S3 I have an "old" phone laying around. As I've played with my potential backpacking package I have noted that there is likely more activity on digital modes, particularly PSK-31 than CW. That led me to think about an AFSK project I worked on a couple years ago with W8DA of Wolphi-Solutions. The physical interface, now called the Wolphi-Link is in a tiny little box about 2" by 1-1/4" by 3/4" that connects your Cell phone to your radio, in my case a Yaesu FT-817nd. It provides the audio interface and PTT (push to talk) control for your radio and combined with the DroidPSK App allows you to have a PSK QSO without a laptop computer. A home brew version of the interface was described on page 30 of the May 2012 issue of ARRL's QST magazine.

So I hooked the interface to the Galaxy S2 phone and FT-817nd transceiver which in turn was connected through my Tuna Tunah II tuner to a 33 ft 20 meter end fed half wave wire slopes upward from my ground level shack window to about 15 feet in a pine tree nearby and gave it a try. The thrill of ham radio returned when W4FGA in Georgia, about 700 miles away, came back! We had a nice little 599 QSO! Admittedly it would be a bit inconvenient to have a half hour rag chew with the little onscreen keyboard but the customizable Macros allow you to put together a good exchange which is what most of us do anyway.

I offloaded almost everything else from the phone (which I no longer use as a phone) other than the DoridPSK app, turned off all RF communications on the phone and did everything I could to minimize battery usage as my primary objective is to use it where I'll have no options for charging. I'll be fully dependent on the energy I carry with me in the backpack (including food!). If you are at all interested in playing with the "ultra portable" digital idea, take a look at Wolphi-Solutions. I'm not getting paid to say that, I just think Wolfgang has a good solution.

OK, now what else can I try that takes no weight and works communications miracles!?