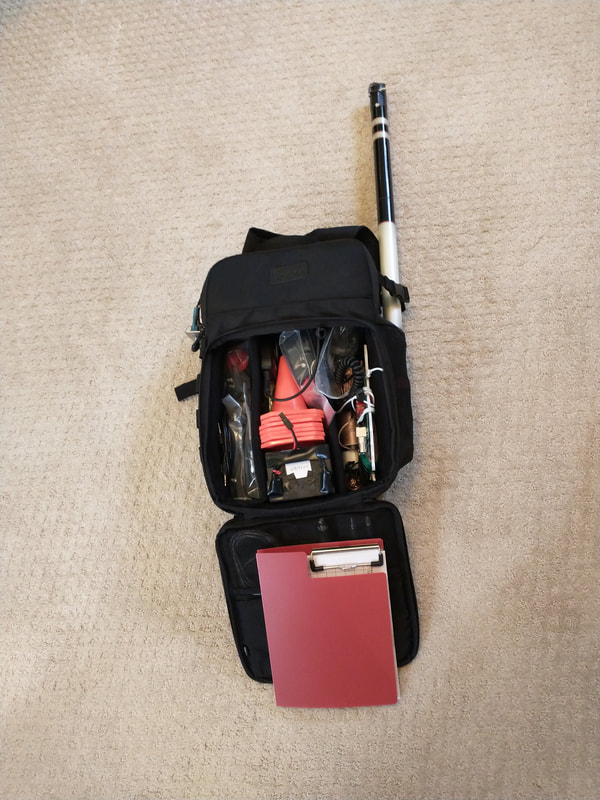 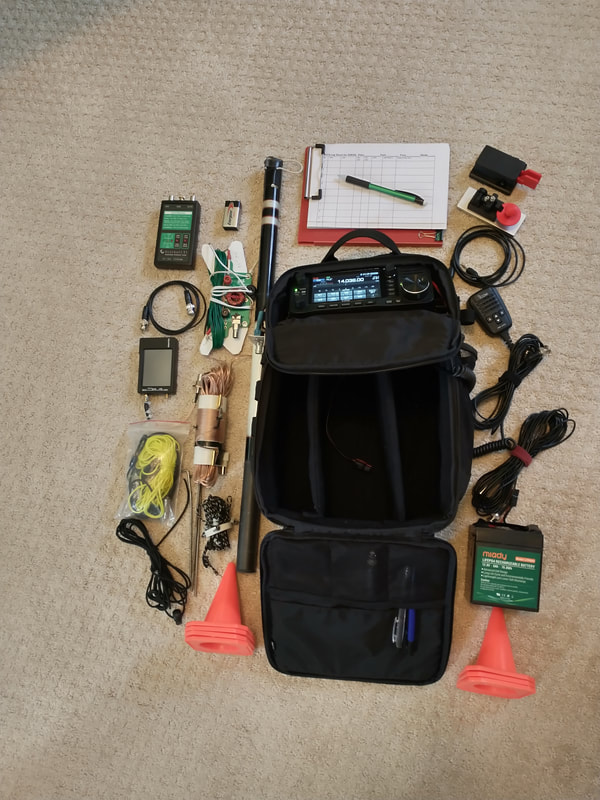 What's in it? My ICOM IC-705 radio, mounted in the top of the ICOM backpack. Miady 6Ah LiPoFe4 battery. A CW Morse CW paddle and a CW Morse straight key as well as a half size clip board with log sheets and a couple pencils for logging.

Two antennas: 1) QRPGuys 9:1 unun with 29 ft radiator and 17 ft counterpoise. 2) My DIY 17' vertical with four 10' radials and a bottom loading coil for 30 and 40 meters. A 20' collapsible fiberglass fishing pole with a collar and guy cords and three tent pegs. In addition for the antenna system I have a 15' or piece of bunge cord with a cord lock and a hook for tying off the end fed antenna if needed and a plastic bag with some cord to use to suspend either antenna from a tree if needed. And my NanoVNA and Elecraft T1 tuner and spare battery. Also have a 25' and a 15' piece of RG-174 coax to tie it all together.

Last but not least, I learned today, seven small orange cones to mark my territory! I've used all of this together a number of times but now have it all in one bag. Sling it on my back and I'm ready to go. Don't need multiple trips to the car or whatever! I think!
2021-09-11 The past few days I've done several POTA activations with my Xiegu X5105 and ICOM IC705. Both are wonderful radios in their own right. Both work well. The X5105 is super small and self contained, including an antenna tuner, allowing for a very light weight and simple portable kit. The IC705 is a bit heavier and bulkier but offers a number of very useful features which make activating a bit easier. So what are my observations for on site operating with the two?
​2) The second disadvantage is the heavy use of embedded menus. ​Changing bandwidth, for example, takes a number of seconds as you have to click through the menus, to DSP, then click the DSP button. And to return to where you were you have to click through the menus again. On the one hand that makes a host of functions available on a very small front panel but it also makes it more cumbersome in a real POTA activation.
3) Another inconvenience is to change CW memories while operating you have to click the MSG button sequentially on the Digi menu option. All that shows on the screen is the MSG # so you have to remember what is recorded in each memory.
Don't get me wrong, I really like the radio. Those are just a few things I find as disadvantages when working POTA or similar activities.
It is an amazing ham radio and is my go to rig for almost all activations.
2021--07-01 After getting home from a POTA activation this afternoon it hit me that I have pretty much settled on my favorite portable radio, antenna and accessories. I say that because almost any time I think of portable operating this is what I first think of. I even have it all packed in a backpack and another bag. And every time I come back from operating the first thing I do is plug the charger onto the battery so it will be ready to go. I've used it almost exclusively for POTA activations the past few months. I took it to our son's place in Minnesota a few weeks back, to our daughter's in Michigan just two weeks ago and used it for Field day this past weekend. The "big items" are an ICOM IC-705 and a Wolf River Coils (WRC) ​TIA Mini antenna with a 17' whip and four ten foot counterpoise wires. Everything else is built around those two things.
The battery is a Mady 6Ah LiFePo4 rechargeable battery. I work mostly CW so have a ​CW Morse Iambic Double Paddle Morse Code Key. I pack 25' of RG-174 coax feedline. And I take a DIY half sized clip board with a DIY straight key attached and log sheets and scratch paper along with a couple mechanical pencils and pins. Those items and a few others are packed into a ICOM LC-192 backpack. Those are the "radio centric" essentials. Of course there are also likely various other items but those form the core.
My primary antenna, as stated above is a WRC Take It Along (TIA) with their Mini coil and a Chameleon 17' collapsible whip and DIY four ten foot counterpoise wires. MY WRC has the short legs so I made three 24" legs of PVC pipe which I slop over the legs if needed to make it more stable. I also have dual collars on it so when I take it to the field it is preset to 20, 30 and 40 meters. I often have other antennas with me but that is an essential one for me. It along with a few other varying items is packed in a tripod carry bag.
My activation today is a typical example of how I head out to activate. My radio bag was packed, charged and log sheets attached, so I just grabbed it. The antennas were in their bag so i grabbed it. Put the two bags in the car, grabbed some water and a snack and took off! When I got to the park which is only about ten miles away I selected a shaded spot with a picnic table and set up the WRC antenna which took about five minutes or so. Then I unzipped the lower bag compartment, pulled out the key and note pad and attached the battery to the radio. Next I unzipped the flap which covers the face of the radio, attached the antenna to the BNC connector on the side of the bag. Powered up, checked the POTA spots page on my phone, clicked on the Reverse Beacon Network icon tuned to a clear 20 meter frequency, sent a couple QRL's, created a POTA spot and sent CQ! RBN showed me almost immediately with good reports. I sent CQ one more time and the first station called. 24 minutes later I had 18 in the log, signed off packed up and headed home. Total time in the park was just under an hour.
The ICOM backpack is pretty expensive but I think it's worth it if you plan to do much portable work. It's so nice to just unzip the cover and get on the air. No setup at all related to the radio itself. I've done quite a few portable operations with equipment and bag options which protect your gear and get it their but you then have to set up and connect up everything. Not a big deal but this is a lot more convenient! 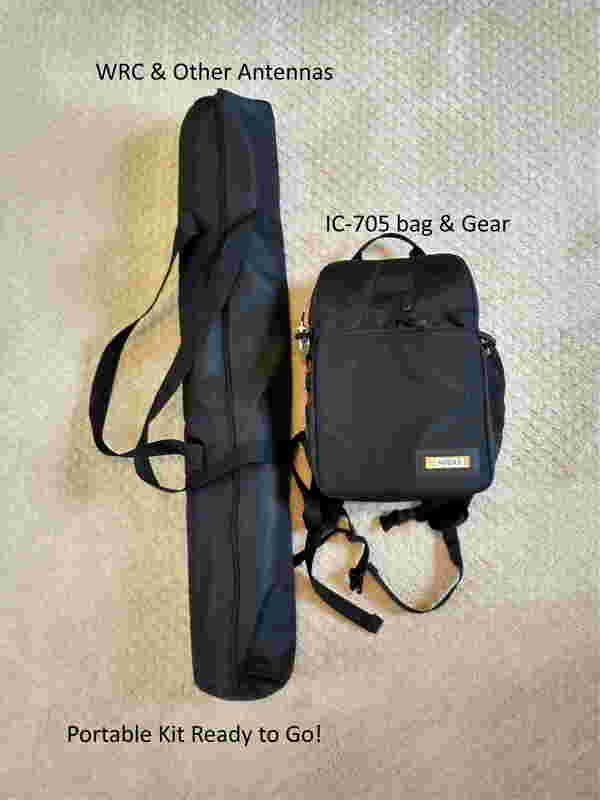 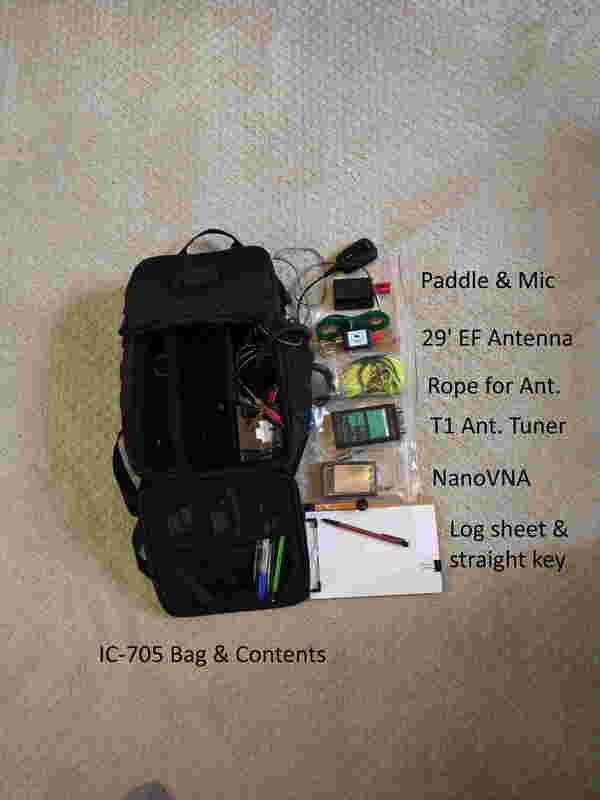 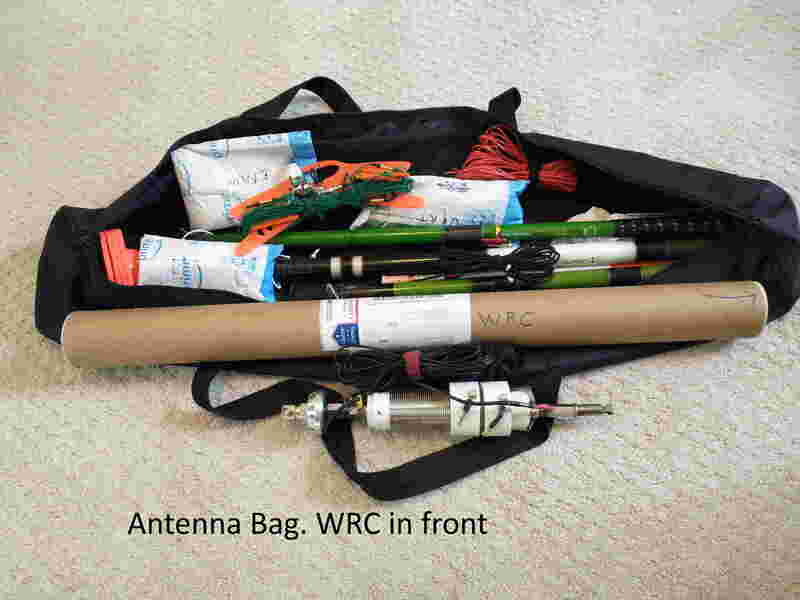 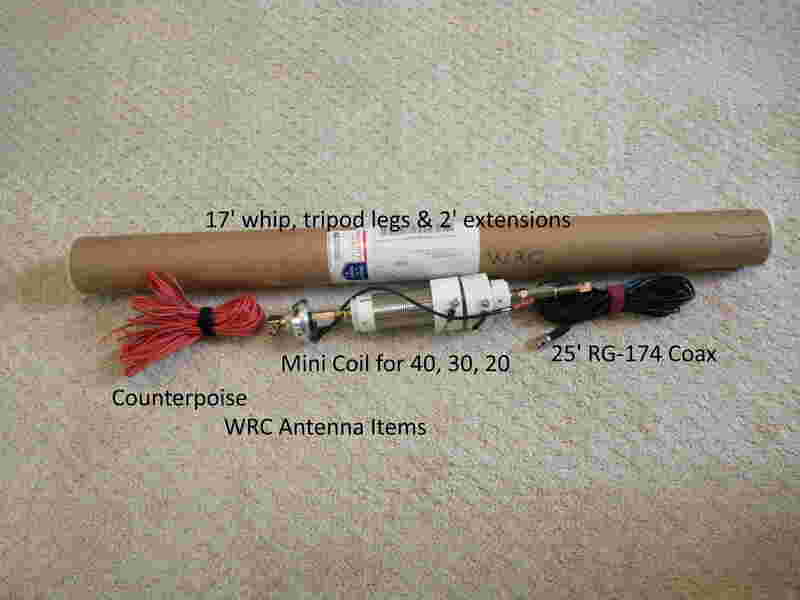 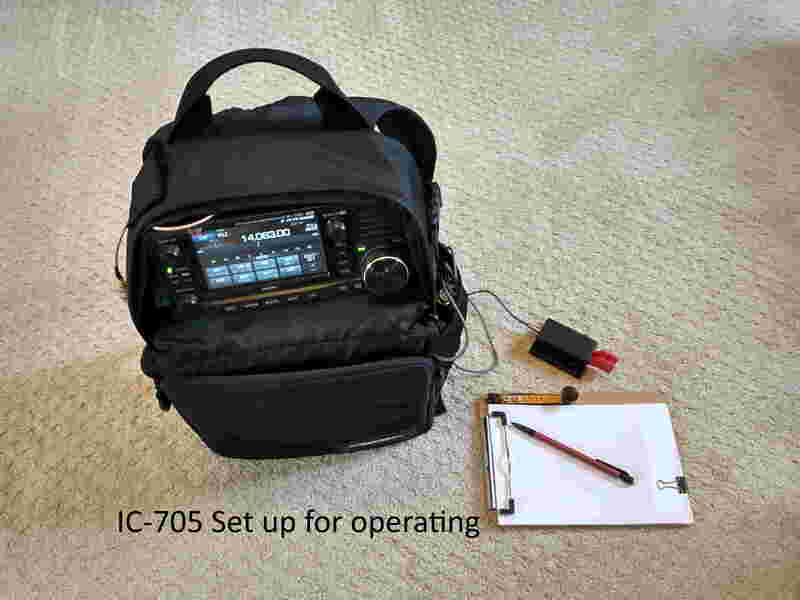 As both the photo of the radio bag and antenna bag contents show I carry some additional things besides the basic items often. The radio bag has an Elecraft T1 auto tuner and a QRPGuys 29' end fed antenna with a 9:1 unun and some rope to suspend it. I don't always have that but it does provide a complete operational setup should I not have the antenna bag. I also carry my NanoVNA antenna analyzer with me in case I need to do any antenna adjustments.
The antenna bag also has a number of things besides the WRC. There is a QRPGuys 40-10 meter EFHW, a wire vertical and a 20,30,40 link dipole as well as some extra coax. I also have three push up fishing poles and guy lines and stakes for setting up the EFHW or whatever else. All that is not part of the basic kit but is usually in the bag so I have options if needed. Finally the WRC whip, tripod legs and PVC pipe leg extensions are in the cardboard tube. In both the radio bag and the antenna bag I always carry a couple 10' or 15' roles of 1/8" bungee cord and cord locks. It's useful for many things but I always use it to tie off my wire antennas. Being small and stretchy it makes tying off wire antennas very easy and forgiving compared to other cordage or ropes. And all my wire antennas are very light weight made with 26 gauge wire so they put very little strain on their supports.
For more on my experience and observations about portable antenna masts, click here.
I've been enamored by portable and small HF rigs for a long time. But I've never really taken one anywhere other than the back yard and maybe to a local park, and then with pretty disappointing results. My Yaesu FT-817 currently serves as my VHF rig in the shack. I got a Ten-Tec R4020 several years ago (no longer available from Ten-Tec but a newer version is available from YouKits) and even took it on a canoe trip but never even got it out of the bag as the trip had to be aborted after one day on the St. Croix river due to camp grounds all being full.

I've built several portable antennas, dipoles, end fed half waves, etc., even my own version of a PAC-12 vertical. But again, none of them ever made it out of my yard more than a couple times and then with dismal results.

The other day it occurred to me that I "might" take something with me on the backpacking trip to Glacier National Park this coming July (2015). Two issues will decide that. 1) can I get a package together that has some chance of actually working? 2) Can I spare the weight? The second one will be determined the night before as we load our packs! Through my two previous backpacking trips, one for five nights and one for two,  I have learned that every ounce is precious when it is strapped to your back and you are looking at five to eight hours of hiking, AND more than a little of that is up hill! So we'll see....

The following pages deal with the rigs, the antennas and other issues I have dealt with in putting together a package suitable for a long and hard backpacking trip.