2021-07-08 Went back to Richard Bong State Recreation Area, K-4265, about ten miles from my home QTH here in SE Wisconsin this afternoon. I have almost 600 activation contacts in that park so far. I decided to go minimalist today with a 4 pound kit consisting of my X5105, QRPGuys 9:1 transformer with a 29' radiator and 17' counterpoise and a 14' collapsible fiberglass fishing pole. I could have carried the whole thing in one hand had I not also taken my DIY stand for the pole and a couple bricks to keep it upright since the wind was a bit gusty. 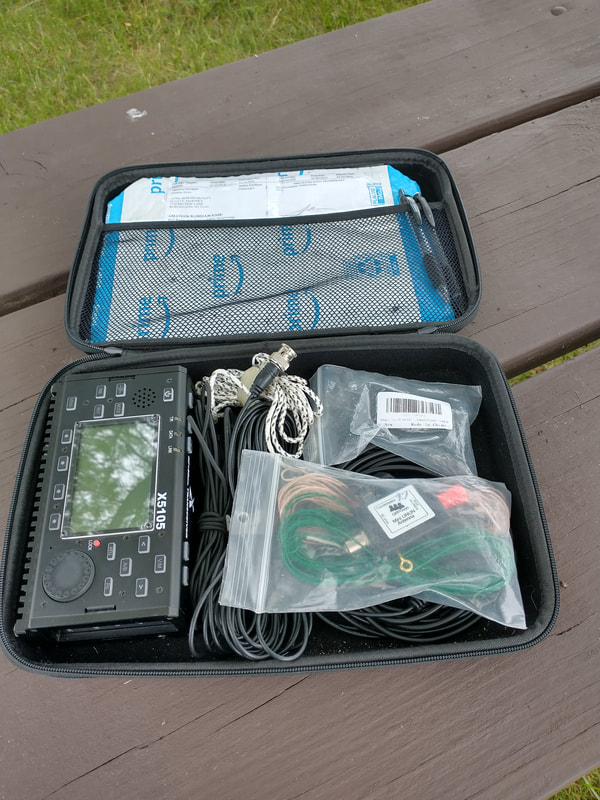 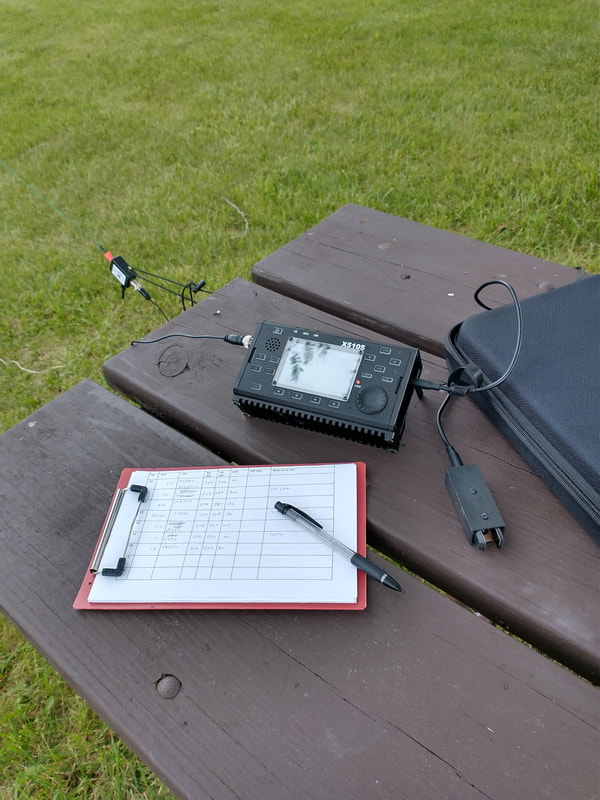 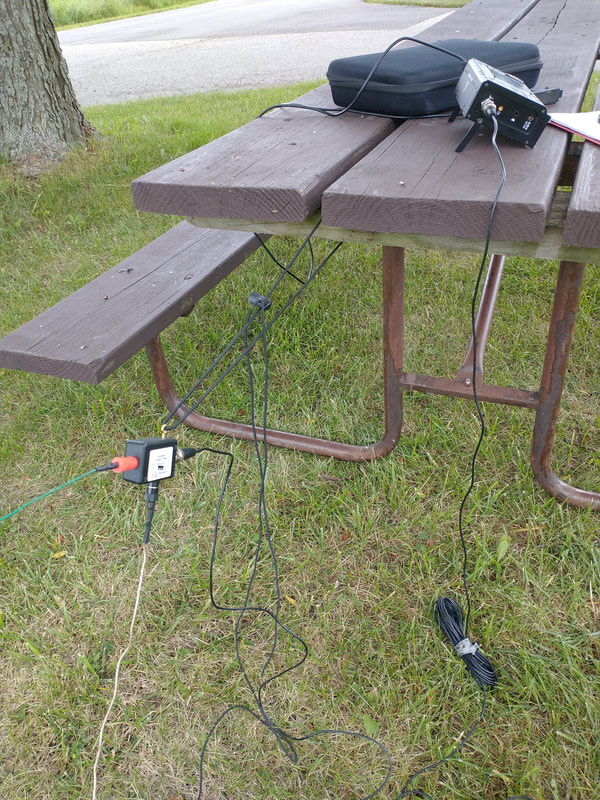 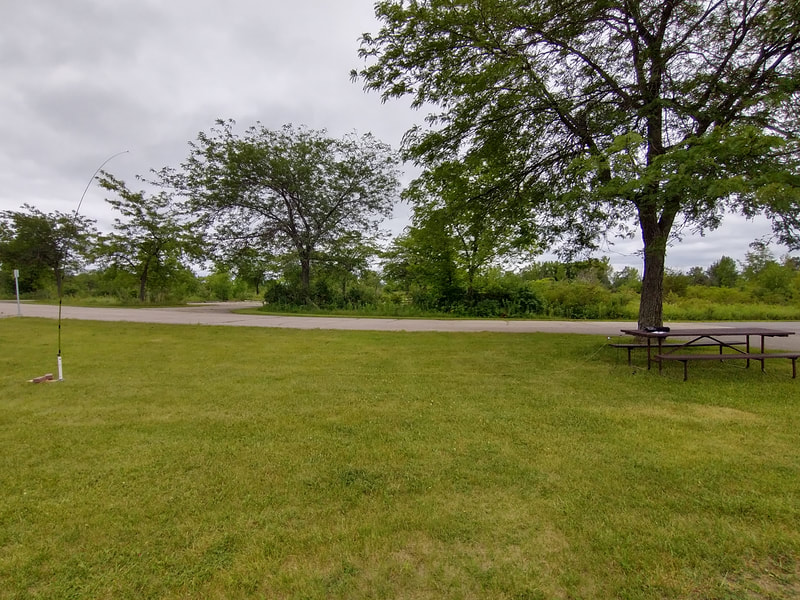 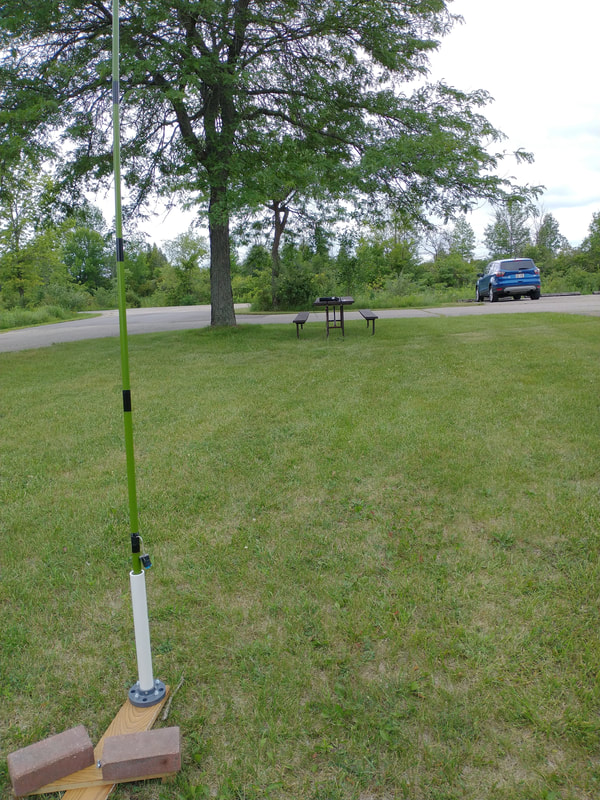 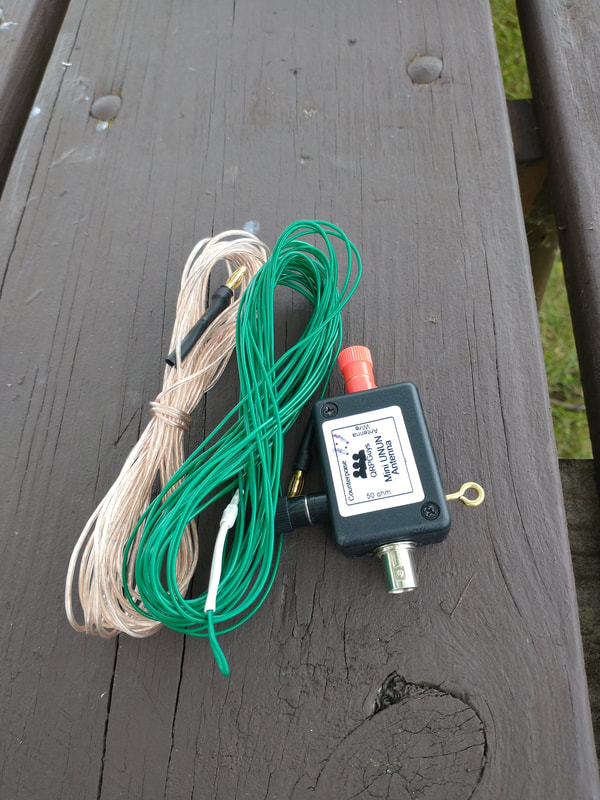 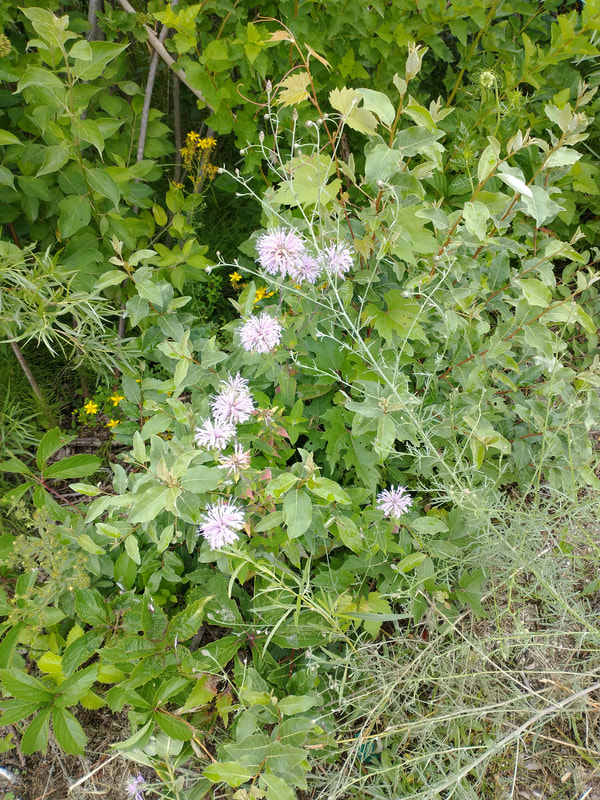 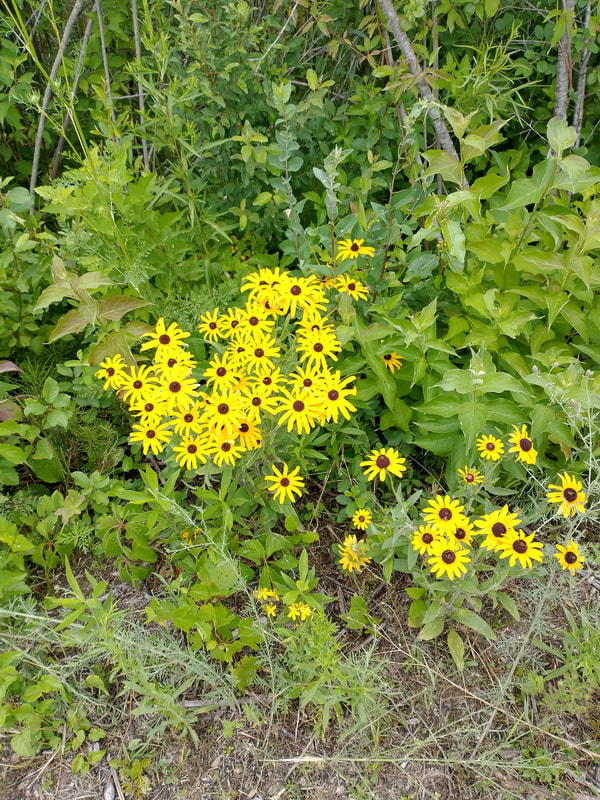 It took about ten minutes to set up. When I turned on the radio, N4EES in TN was calling CQ SKCC right where the radio was tuned. We had worked early in the morning from my home station but I gave him call anyway and we had a short chat! That encouraged me. I tuned to 14.044, called QRL a couple times, posted a spot on the POTA spotting page and called CQ. RBN showed several hits with good reports.

After just a couple calls N3AZZ responded from PA. Over the next half hour I logged 14 contacts. Then the well dried up. I then switched to 10.114 on 30 meters and called. Two stations responded including N3OJL who had also called me on 20 meters. Then 30 meters dried up!
My only disappoint from the day was early on I got a call from a station in Washington State which I wrote down as K7L but later realized that was incorrect. That was a good contact at 5w on the 29' sloper from WI, but alas it won't be in the official records!

I really like that 29' sloper even though I don't use it much, thinking of it as a compromise antenna. But today it held its own and moved up on my list of choices! If you have a tuner it can be used on just about any band making it very flexible. The x5105 has a great tuner so the pair are made for each other.
​
Thanks to all of you hunters who called me today. You gave me a very pleasant hour or so in the park. And you gave me enough time to pause and notice a couple wild flowers! 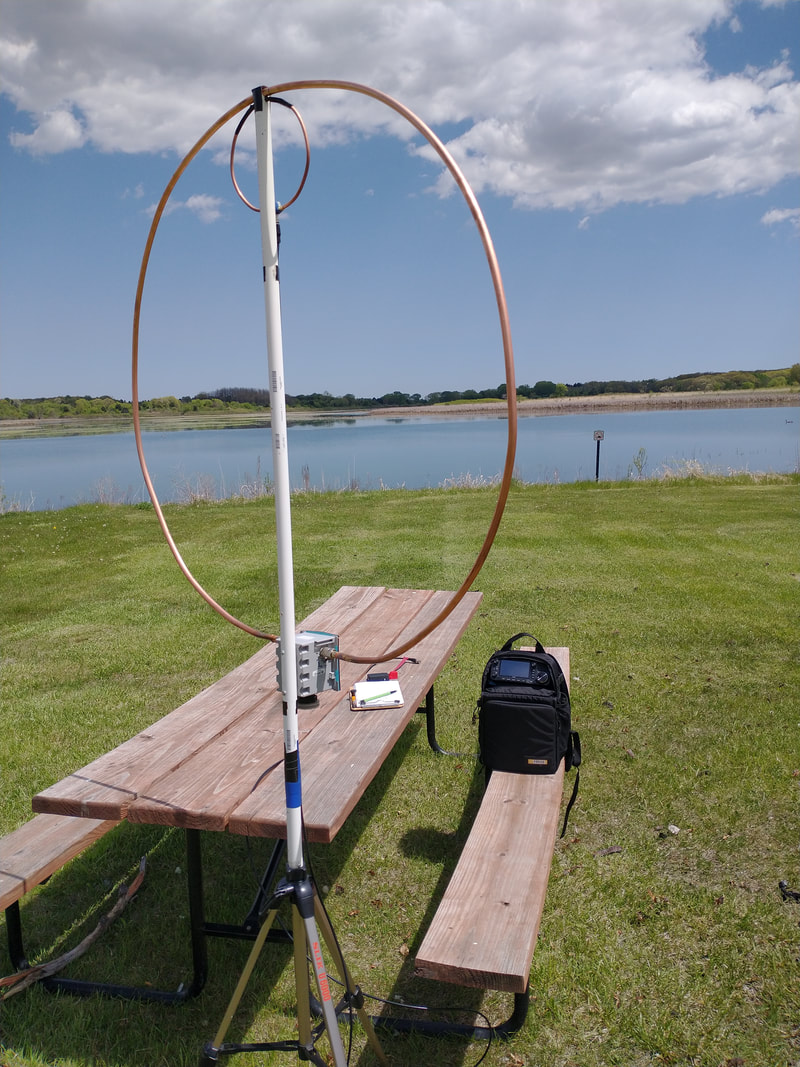 2021-05-13 At k-4265 today logged 15 contacts on 20 and 40 meters. 2 in Spain, 1 in Finland. CW, IC-705 @ 10w. All with this DIY 1 meter mag loop. I was surprised, pleasantly! The problem is, I now have one more antenna to choose for activations! ​
​2021-07-01 It's been a while since I was able to do an activation due to weather and some family medical stuff. But my dear wife offered this morning to go to a park and nap while I played radio. That didn't work out but I went (with her encouragement!) to k-4265 Richard Bong State Recreation Area here in SE Wisconsin for an hour and had fun anyway. 18 CW contacts in 24min on 20 meters. Porto Rico and Oregon the most distant. One P2P as well. And it was a beautiful day!
Setup was my ic705 and WRC TIA Mini with 17' chameleon whip and my standard 4 ten ft counterpoise wires. Feedline was 25' rg174 coax. Ran 10 watts.
Band noise was low. Signals were strong. Not a single CW spot was showing when I started and mine was the only spot the whole time! Thought I had wasted my time 'till I called CQ. Got many strong RBN spots and was "hit" almost immediately! 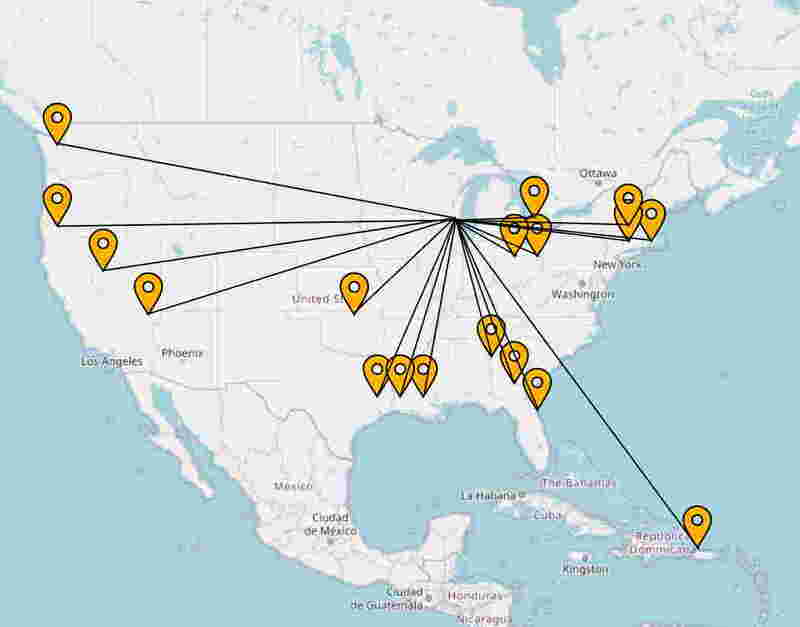 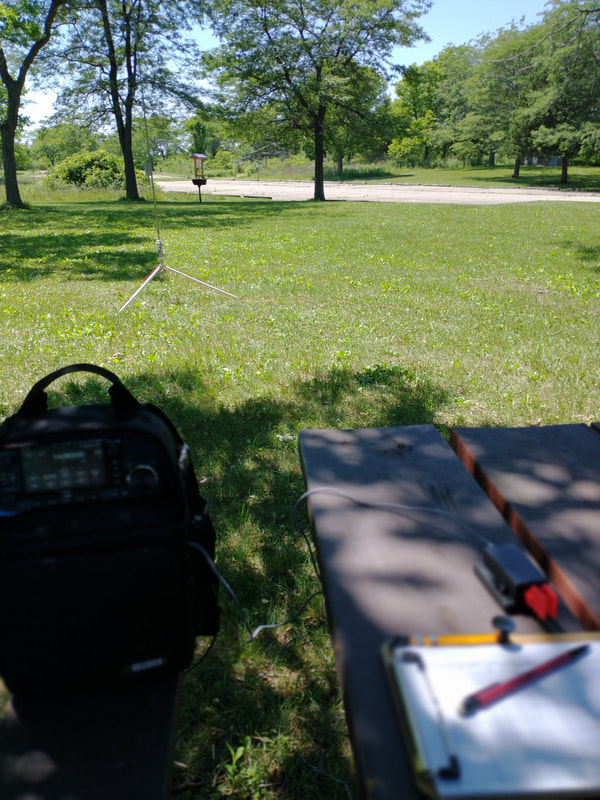 2021-04-22 It was good to be back at K-4265, Richard Bong State Recreation Area here in WI this afternoon. It's my closest POTA park and has lots of places to set up. So I set up in one of the picnic areas as no one was around. Rig was my IC_705 in the ICOM backpack. Antenna was a QRPGuys mini 40-10 end fed which has a very small 9:1 unun. It requires an antenna tuner so I used my first-time-out Elecraft T1 QRP tuner. All performed very well. 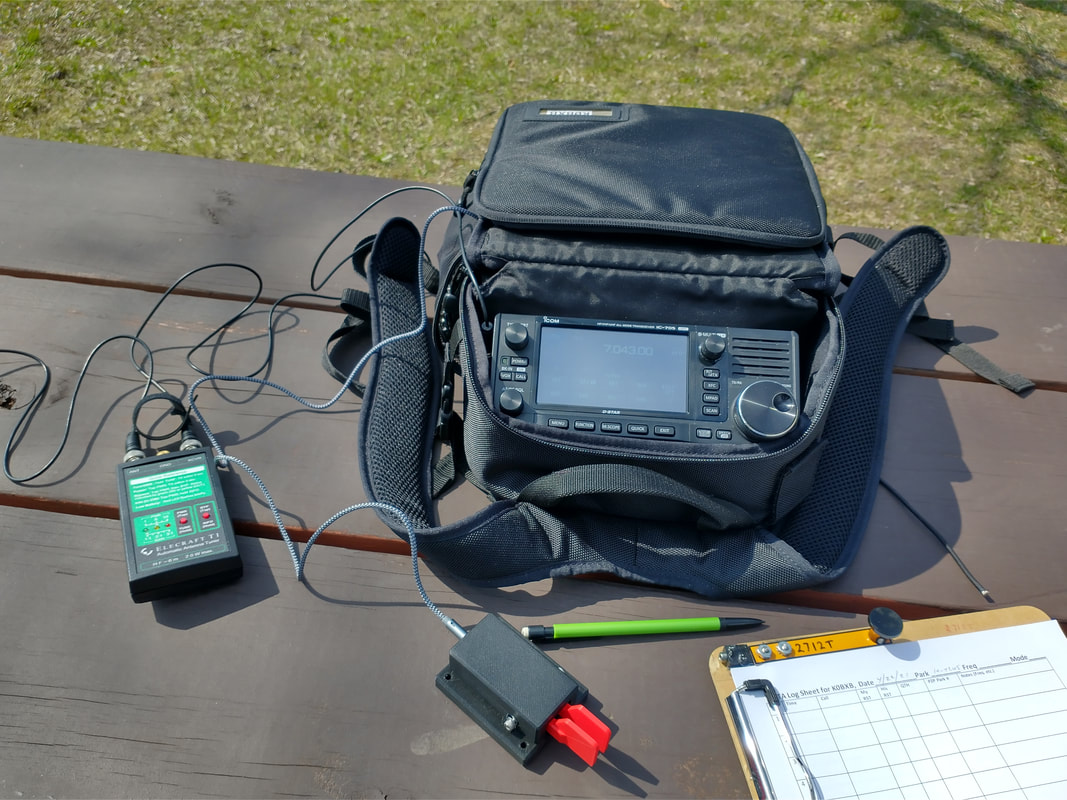 ​Started out at 7.043 where over about 15 minutes I got three contacts. Moved to 10.114 and picked up another four contacts. Then switched to 14.041 and got another four contacts. Most exotic was CE1R in Chili, a meager 5345 miles! Next most exotic was W6OUL in CA, 1800 miles, both on 20 meters. Total on-air time was about 45 minutes. Needless to say I was happy with the results and very much appreciate all the hunters.
​Observations? The main one is that the humble 29ft wire with 17ft counterpoise is a good antenna. Not the best I am sure but with its ease of setup, very light weight and small size, it is a good option. And the tiny T1 tuner is simply a slick device in every way!
My second observation is that though auto-repeat CW message keying (CQ CQ CQ POTA de K0BXB k0BXB) is really convenient, It invariable caused me to miss the first letter of a replying stations call so I had to ask for a repeat. I gave that up and simply pressed the message button each time. The reason is that to stop the repeat you have to tap the key or press the button. Both are distracting and issue a beep. Probably just my problem!
​Finally, I came away impressed with the ICOM bag. It is so nice to simply unzip the bag, attach the key and external battery (in the case), attach the antenna and go to work. Saves setup time and messiness. It doesn't allow as much flexibility in placing the radio to avoid reflections in the screen but on balance I like being able to keep it in the bag to operate.
Sorry no photo of the antenna and overall setup. Nature was calling loudly and I had to make quick work of packing up! Weather was wonderful, about 65, sunny and not too windy.
2021-02-23 ​It hit 42 today here in southeast Wisconsin. What a pleasure to wear just a light coat for my activation of K-4265 today. Used my x5105 QRP xceiver and my Wolf River Coils TIA1000 with the 213" whip and four 10' counterpoise wires tossed onto the melting snow in the parking lot. I usually use RG-174 coax but this time RG-58c/u, not that it makes a lot of difference. the antenna was about 15' from my car.
Started on 20m and pretty quickly got four contacts, FL, NM, WY and CA. Then everyone ignored me. So switched to 30m and picked up another ten contacts including one in AZ. Then 30 dried up. It was getting a bit late anyway so I packed up and came home. Another nice QRP outing.
Being almost exclusively CW when activating, I'm starting to really like 30 meters.
Thanks again to the fourteen of you who contacted me and the several others that I could not hear well enough to connect.
2021-02-11 This afternoon I drove the 13 miles to k-4265, Richard Bong State recreation area in southeast Wisconsin. It was 17° and overcast. This was my first time to try an activation below about 30° and wasn't sure how long I would stay. It only took about six or seven minutes to set up my Wolf River coils Tia 1000 with 213-in whip and 4 10-ft radials. RG 174 coax connected it to my xiegu x5105 qrp rig.

I initially checked the POTA spots and didn't see anything interesting but then stumbled across K8TK at Park k-4226 calling CQ on 7.062 megahertz. So I knew everything was working. After tuning around I selected 7.059 MHz and started calling cq POTA after posting a spot. Within a few minutes calls started coming in ending with 11 calls about a half hour later.

Then I switched to 30 meters and called CQ at 10.111 megahertz. The first contact took about 10 minutes and then over the next nearly half hour I got another nine contacts. By then the outside temperature dropped a few degrees and it was getting cold in the car so I packed up and headed home. 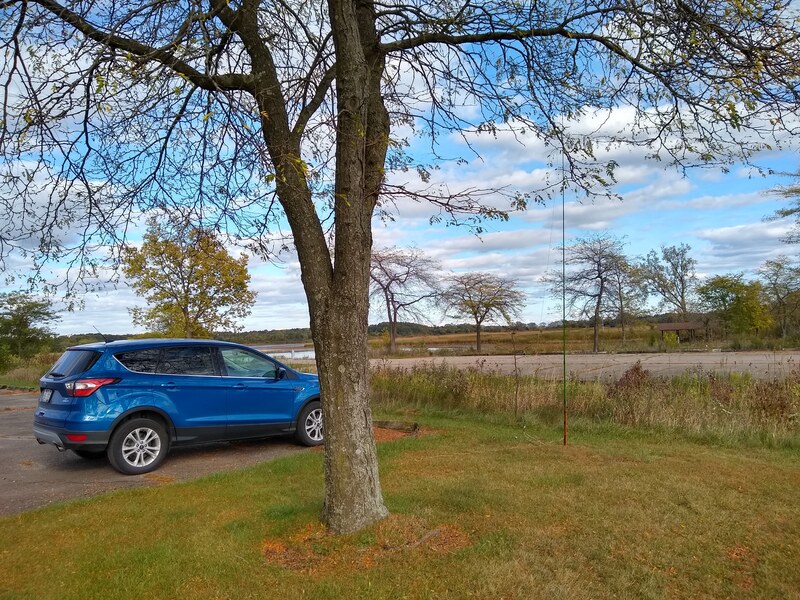 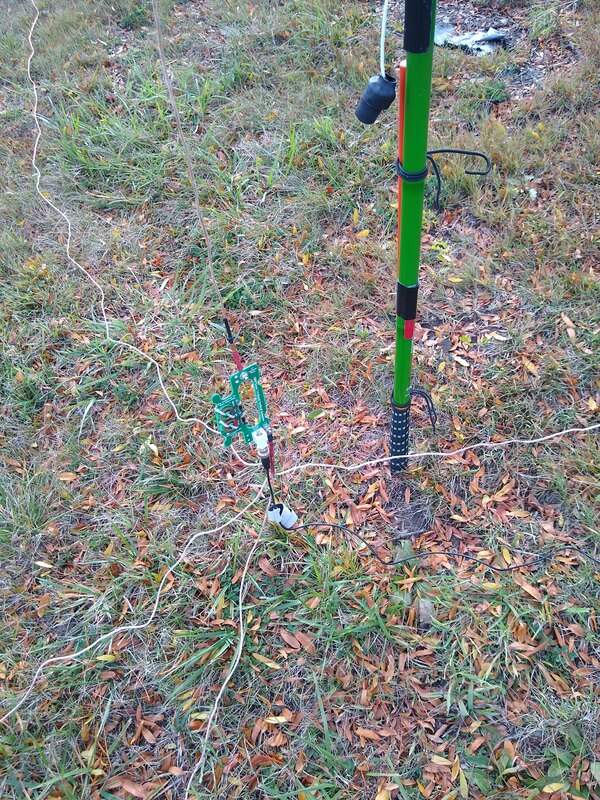 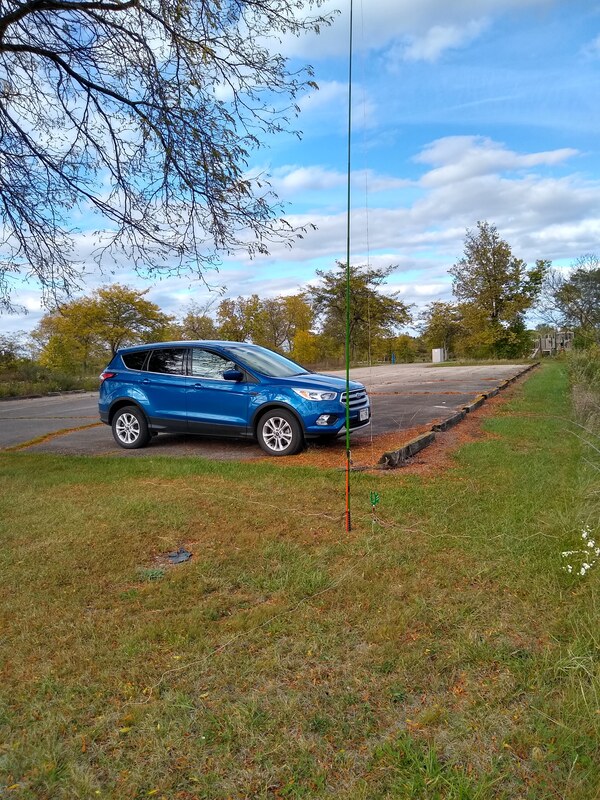 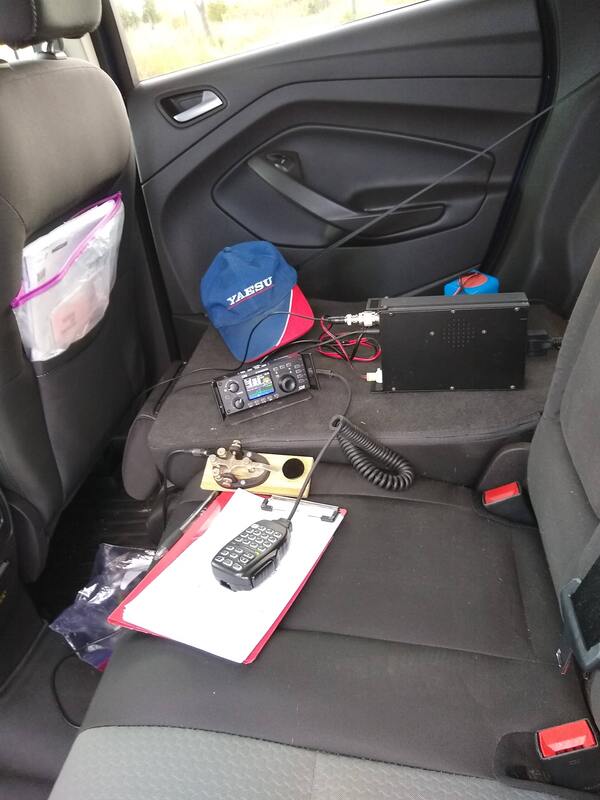 2020-09-13 One of the things I like about the Ham Radio hobby is that there is no one, right or best way to do anything! It's a good platform to learn that the things in life are deeply impacted, perhaps even determined by the broader situations of life, the context, if you please. The last week it has been misting, raining or even down-pouring off and on every day! So until yesterday I felt "confined" to home and unable to get out and play POTA. Picnic tables were wet. Stringing an EFHW antenna would be a messy job. Just stuck. Then I got to thinking maybe I could set up and work from inside my Ford Escape. Then, I discovered when you fold half the back seat down the result is a completely flat and level surface! Awe, set the rig up there, sit in the other half of the seat, set up my Wolf River Coils antenna outside the car and have at it! It wouldn't be "roughing it" which was my image of a legitimate POTA activation, but it just might work!
I failed to take any pictures, but yesterday, that is exactly what I did. And it was really fun. It was dry (and a bit steamy) inside the car as it drizzled and misted the whole time while I was at K4265, Richard Bong Recreation Area, but I logged sixteen QSO's, twelve of them Park-to-Park (P2P)! All SSB on both 20 and 40 meters. I was dry, my WRC was wet but both were happy. My rig was my xiegu G90 powered by one of my 6Ah miady LIFEPO4 batteries with a 50ft RG8x to the antenna. Lesson learned (maybe), there are different ways to get there! And, oh, the mosquitoes didn't get a single piece of me! :-)
2020-08-26 Today was a significant day in my 60 year ham radio life. After months of being a POTA hunter, logging 260 QSOs with stations operating from 37 different parks, and "dreaming" about being an activator myself, today I did it! I packed up my xiegu G90, QRPGuys EFHW antenna, 6Ah LIFEPO4 battery, carbon fiber collapsible fishing pole and dri\ove 4-1/2 miles to Wisconsin's Richard Bong State Recreation Area. I've been there many times over the years to hike, camp and fly RC planes. But never to operate HF radio! 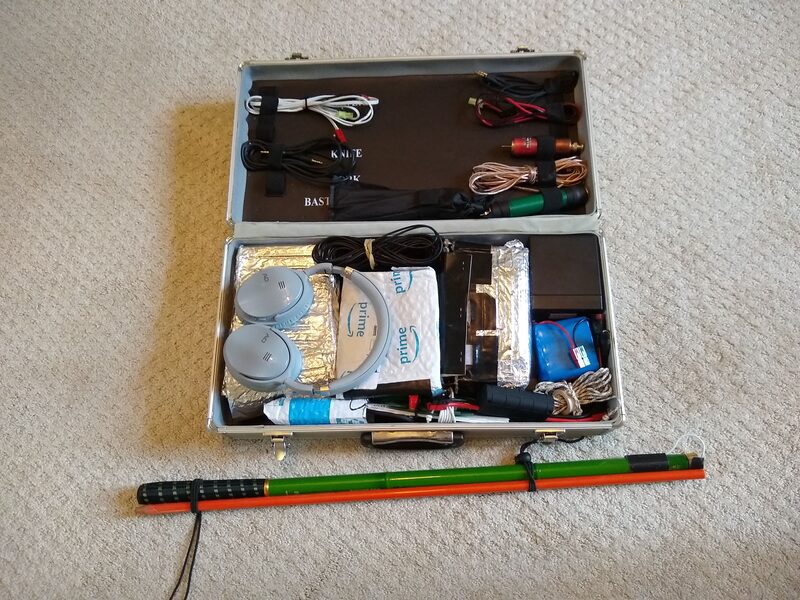 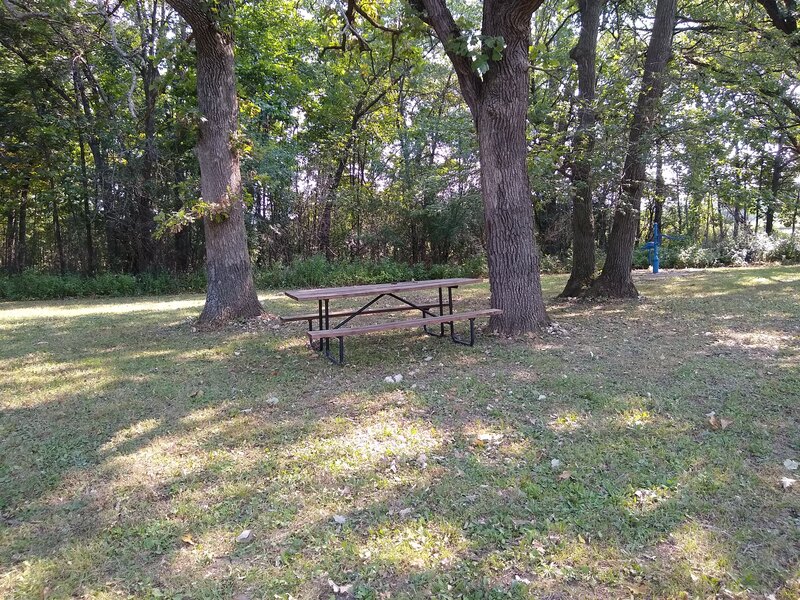 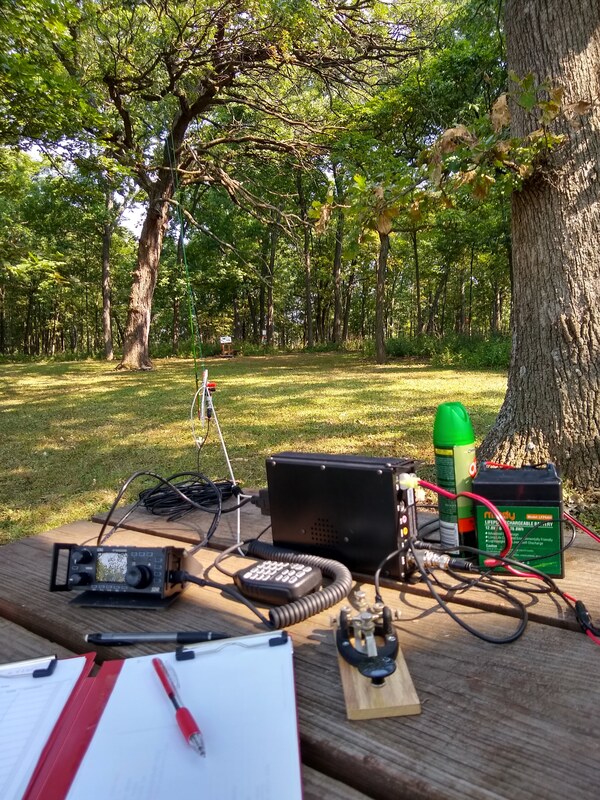 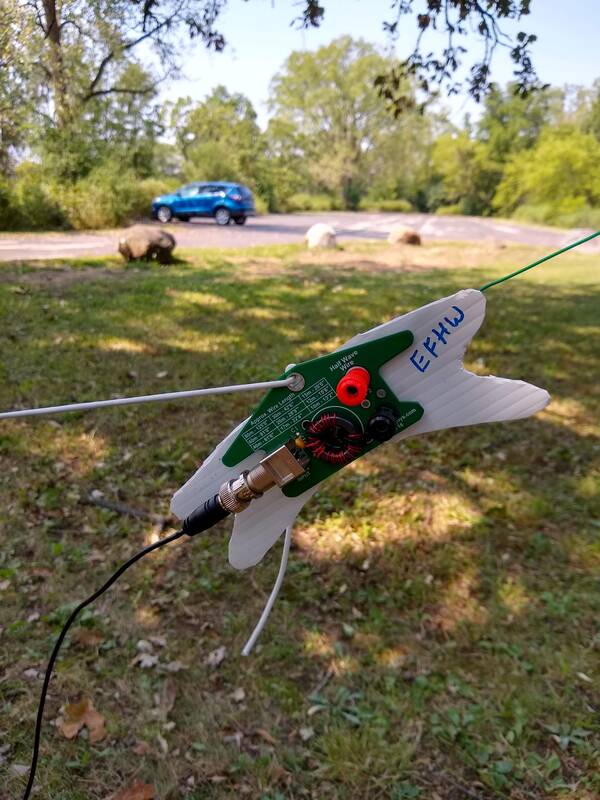 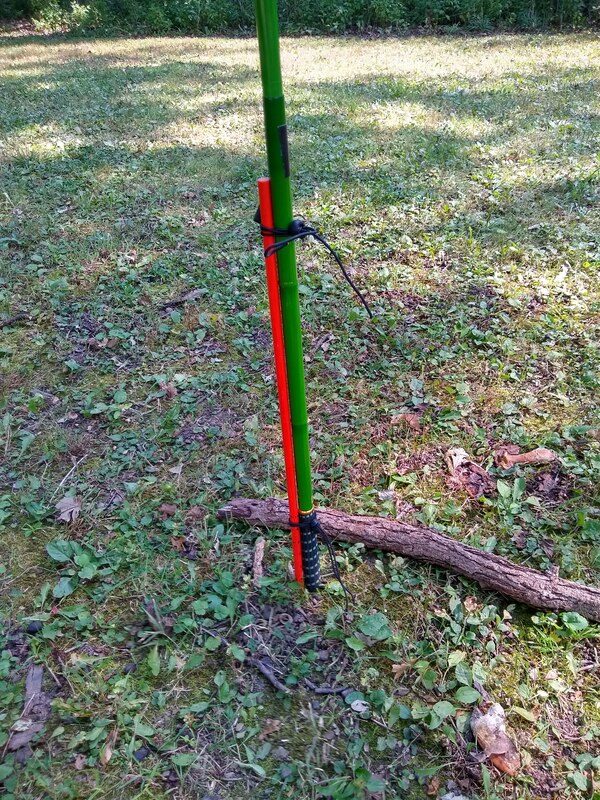 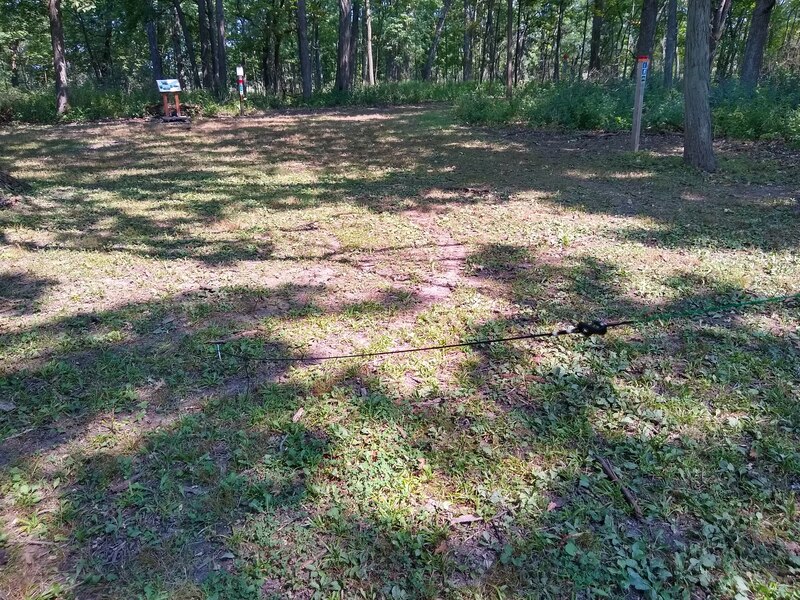 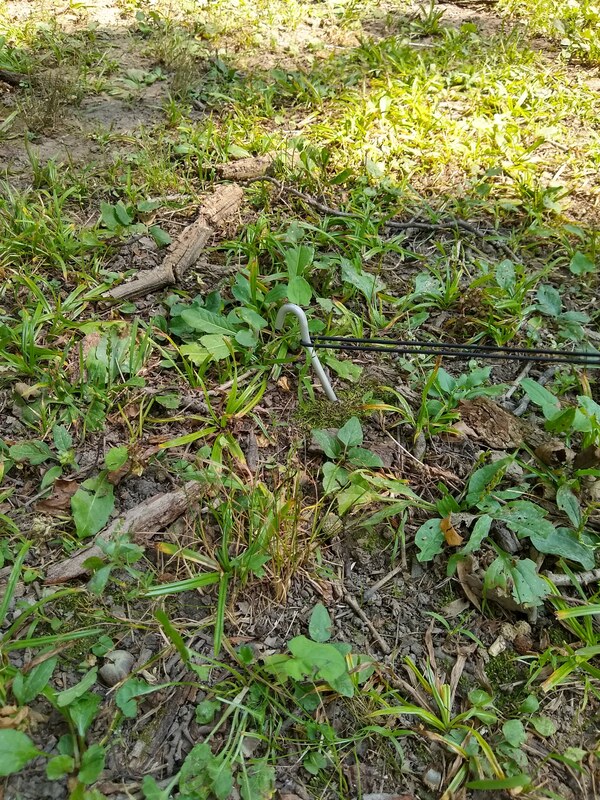 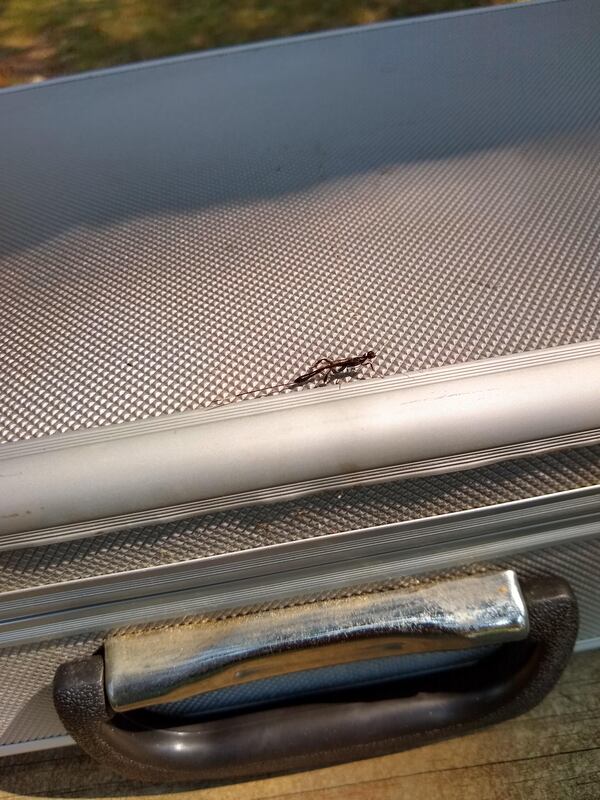 All my gear except the 20 foot carbon fiber collapsible fishing pole were packed in a hard sided case from a local thrift store. The site was an open picnic area shaded by large oak trees. It was relatively cool at 10:00am when I arrived but swarming with mosquitoes. Thankfully, after a few minutes the OFF kicked in and they quit bothering me. If one purpose of POTA is to show the public what ham radio is I didn't do well. the only visitor, other than mosquitoes and a few birds flying around, was some strange bug that landed on my case! He wasn't impressed and didn't stay long.
I chose my QRPGuys EFHW antenna and set it up as an inverted vee using the carbon fiber pole to support the center. I secured the pole to the ground with half of a fiberglass snow marker. The pole was tied to the snow marker with three turns of 1/8th inch bungee cord secured with a cord lock. I find that bungee cord and cord locks, indispensable for setting up antennas. I also used a piece of bungee cord about 8 feet long to tie the far end of the antenna wire to a tent stake in the ground and another shorter piece to tie the transformer to the picnic table. It provides more than adequate strength to hold the antenna taught but is very easy to work with and provides the antenna flexibility. Great stuff I discovered in my hiking/camping hobby.
The picnic table served well as my operating bench! Here are some observations from the experience.
Conclusion? A lot of fun. I'll be back again, I'm sure.