2018-07-01 We did go camping this past Thursday and Friday nights but skipped out on Saturday due to the extreme heat. Temperature climbed into the 90s with nearly as high humidity. Tent sleeping was impossible. I didn't have opportunity to even take the ham gear out of the car. Some other time! 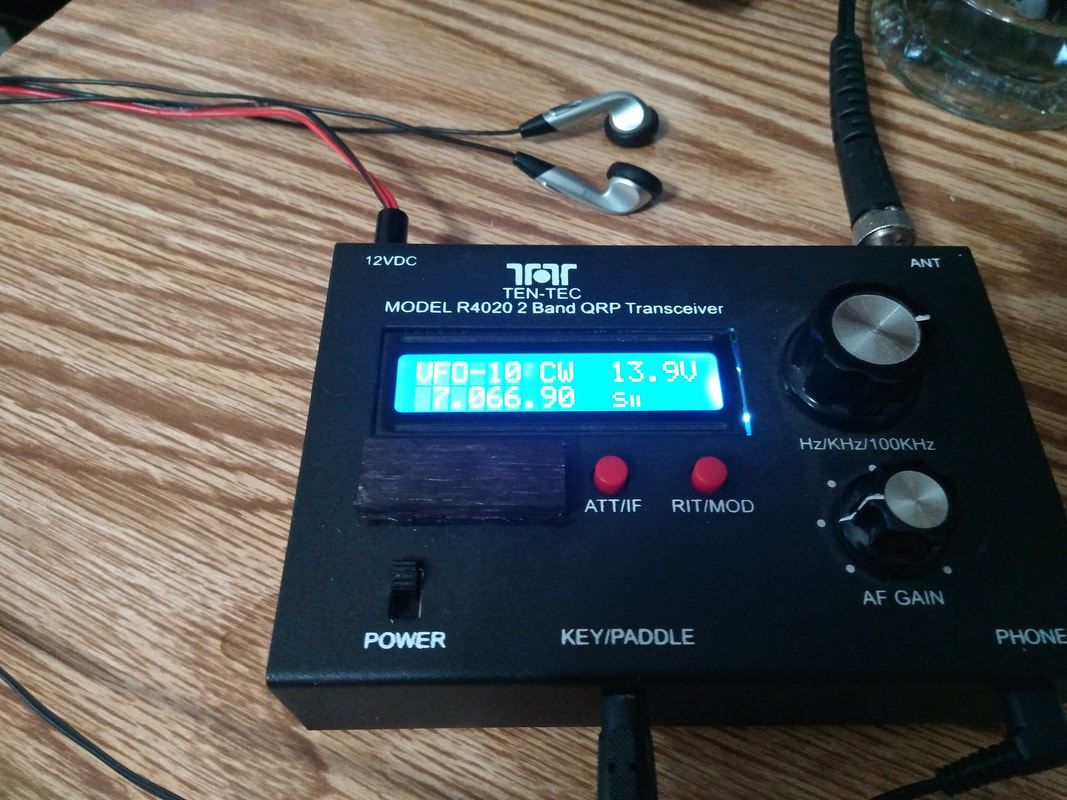 Ten-Tec R4020 QRP Transceiver
2018-06-27 Now that Field day is behind us and I have a  seemingly good portable 40/20 meter Trap Style Inverted Vee and a portable push up mast, I decided to try out the Ten-Tec R4020 again. So, I got everything together and headed out to the yard. It took me about ten or so minutes to set up the antenna. Another five or ten minutes were needed to connect the radio, battery key, get some scratch paper and a pencil to make some notes, etc. The radio liked both bands right off the bat, giving me its full output power of five watts or so. So I listened around a few minutes on 20 meters and heard Karen, W4KRN in VA in an SKCC QSO with another station. When they finished I gave her a quick call. She came back and we had a quick QSO. She was coming in 589 here and she gave me a 579. Solid copy all the way! So I took everything down requiring about 15 minutes. About 45 minutes total from setup to take down, not bad! I'm pleased and plan to put together a "go kit" with the setup and take it camping this weekend with our grandkids. I may not have opportunity to operate but it'll be on hand just in case!
2018-03-12 Ten-Tec R4020. Back around 2010 or so Ten-Tec sold this imported transceiver. Measuring about 5-1/2 in by 3-3/4 in by 1-1/2 in and weighing only one pound it was/is a very nice 5 watt CW transceiver. The receiver is broad banded but it transmits CW on 40 and 20 meters. It also includes internal battery holders for 8 AA batteries which of course add to its weight. I loved it and had 75 QSOs with it between August of 2011 and June of 2013. Then it went crazy. I sent it in to YouKits (Ten-Tec quit selling it and referred me to them) and $50 and nearly a year later it came back and all seemed well. I had another 37 QSOs. Then it went crazy again. In both cases I don't recall exactly what it was doing but it would get stuck in the memory save mode or something and there was nothing I could do. So I shelved it and pretty much forgot about it.
In the mean time we went through a flood situation in our house and everything had to be moved. Once we got back into our house last Fall and got settled I got my ham station up and running again. And I ran across that R4020. It wasn't until a few weeks ago that the thought crossed my mind to give it a try. So I did and to my amazement it seemed to work! I had another 17 QSOs. It was fun.
The receiver is really quiet and sensitive and a pleasure to listen to. The switch-selectable receive band pass of 900hz, 700hz, 500hz and 400hz is effective and clean. It's a joy to operate. Then I had the misfortune of pushing the VFO/MEM/SAV button! It went crazy again! It would get stuck in the memory save mode and nothing would either save the frequency or let me get out of it. If I powered if off and back on it would start in the normal VFO mode but within a few seconds it would be again frozen in the Save mode - without me touching a thing. So I let it sit for a few days, considering it a loss. But yesterday tried it again. It worked! It seems as long as I don't touch that VFO/MEM/SAV button all is well. So made and super-glued a balsa wood block (see the photo above) to cover that and the next button (I'm afraid to push it!) and all "seems" good. The only button I use anyway is the ATT/IF button. We'll see.