11/12/15  We've had a lot of trouble with this plane this season. I'm sure it is NOT the planes fault. I installed the engines and tanks and throttle servos. And therein lies all of our trouble. The space for the tanks is very tight and like a dummy I somehow failed to tighten the plug in the front of the right tank so that it leaked. That explained why that engine always ran out of fuel! Now our problem is the left engine. It must be an air leak in the fuel line as that engine seems to always have problems with air bubbles in the line. So it awaits some serious diagnosis and hopefully repair as the plane really does fly well, according to my son. With the cold setting in it'll be 'till spring before it gets a serious look as my garage is not heated and its way to messy to bring into my in-house shop. 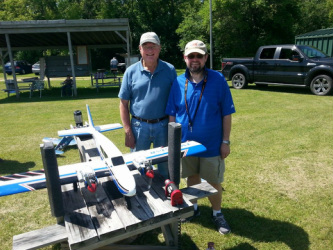 My son and I are planning to build a Topflight DC-3 but wanted some experience with twin's before that. The DC-3 manual suggests the Hobbico Twinstar to gain that experience. So today we took it to the flying field. After tuning the engines again Charles taxied it a bit to get a feel for it and then took off. Shortly after takeoff the right engine failed, but he didn't even know it. He did a low pass to confirm it! It flew nearly as well on one engine as with both. After a perfect landing we put it back on the startup table and tweaked the right engine again.

The second flight was without event. He said it was a very nice flying plane and he brought it in for a perfect landing. Not sure that is enough experience to launch the DC-3 project or not! But it has built our confidence. We are running ASP 25AII 2 stroke engines.