The idea of a bottom loaded vertical for portable operation has been playing around in my head for some time. For many years I used a Little Tarheel screwdriver antenna on my car and loved it. Mobile operation with that was a pleasure. I could tune any band from 80 through 6 meters quickly and on the go. And it worked well. If I could hear them I could work them almost every time and I received good signal reports. It was especially fun to work DX from the car. I think I worked more DX with that than from my home station. So the concept is a winner as far as I'm concerned. The only thing that kept me from actually trying that Little Tarheel as a portable antenna is that it requires battery power to tune it. And that seems like a significant complication when deploying away from the car in the field. It's mobile advantage is somewhat of a portable disadvantage. So when I saw the Wolf River Coils Silver Bullet 1000 TIA, I had to give it a try. 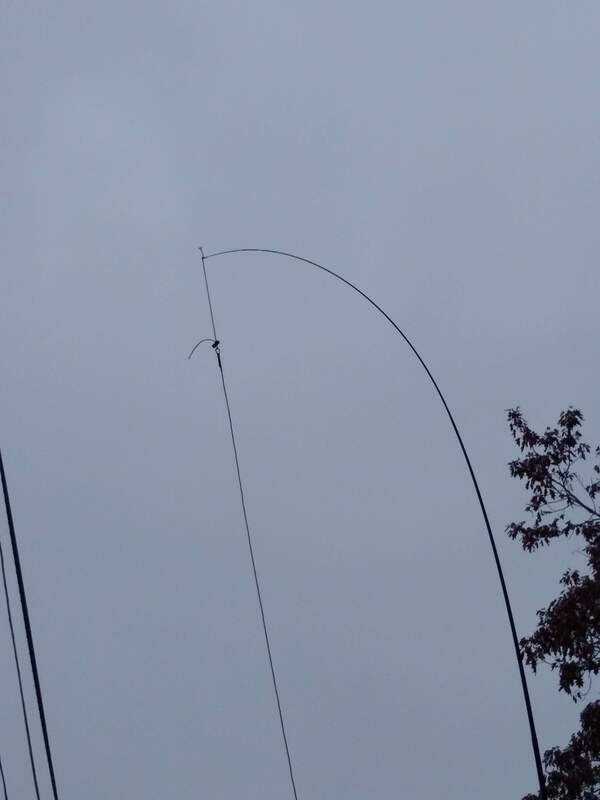 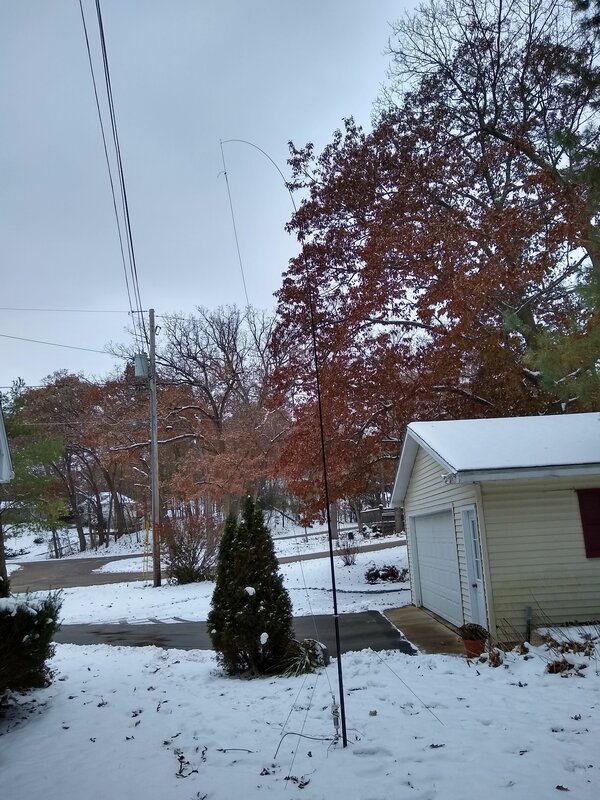 2019-11-14 Today I decided to "clean up" my installation by cutting a new speaker wire element. The result is shown in the three photos above. The original was patched together while tuning it with "scraps" of speaker wire. But first I measured the actual length of the radiator. It was 15-1/2 feet long and made from 16 gauge weather-warn RCA Speaker Wire. So I cut a new one from new 16 gauge RCA speaker wire. It too is 15-1/2 feet long. I sealed all the openings with shrink wrap and Liquid Tape. That seems short to me as a 20 meter 1/4 wave but the lead on the Wolf River Coil is about a foot long so that is probably about right. At any rate the SWR seems to think it is good. It measures 1.2:1 at 14.000 mhz and 1.3:1 at 14.350. That is about as good as your going to get one! On 40 meters it measures 1:1 at 7.0 and 1.5:1 at 7.3 mhz. Again, that's pretty good. Haven't' checked it on-air yet as the bands seem pretty dead, especially 20 meters.
Just completed five QSOs on 20 and 40 meters using this antenna. Most distant was with a station in CA on 20 meters, 1763. Second best, 1223 miles, also on 20 was with a POTA station in Utah. contacts on 40 were from 300 to 600 miles.
One final observation. I have three antennas up right now: my mfj-1984mp 40-10 EFHW as a sloper; QRPGuys 40-10 EFHW as an inverted vee and this vertical. They come into the shack to a switch so I can easily change from one to the other by simply turning the switch. This afternoon I can tell almost no difference in received signals between them. I don't think that is particularly typical of how they work but suggests the difference between them may not be not huge.
2019-11-12 Several weeks ago I ordered the Wolf River Coils Silver Bullet Mini loading coil to replace the Silver Bullet 1000. I realized that I'll seldom if ever tune 80 meters which is the main difference between the two. Then I also ordered their Dual Collar kit which allows you to tune up two bands ahead of time so to change you simply move the jumper from one to the other. It's really slick. I set my collars for 20 and 40 meters, the primary bands I'll likely use most often.
It took many trips into the cold back yard, through the snow to get it tuned but now it works! The SWR on 40 meters is 1:1. On 20 meters it is about 1.3:1. I'm using the three 33' radials provided with the original Silver Bullet 1000. I may play around with adjusting their lengths to reduce the SWR on 20 - next Spring!
I had two QSOs on 20 meters with it, one, CW, to a station in California 1763 miles west the other to the Meritime Mobile Net control in Oklahoma on SSB. I'll try 40 meters tonight and see how that goes.
2019-03-03 For the record, I've completed thirteen QSOs with this antenna as of today. All at 5 watts on my end. They ranged in distance from 190 miles to 1284 miles. Nine were on 40 meters, three on 20 meters and one on 30 meters. All but one were using CW. All of this in the dead of winter with a semi-portable setup. That is, the antenna was out on the sidewalk in the snow and ice while I sat comfortably inside with my battery powered radio at our dining room table, tethered to the antenna with about 35 feet of RG-174 coax. Oh, I just remembered that the first contact as explained below was with the antenna and battery powered radio in our living room so was even more "semi" portable!

2019-03-04 We hit a toasty high of plus ten degrees here in southeast Wisconsin today after an overnight low of about minus six! Winter is being very persistent. But I wanted to play with the Silver Bullet 1000 a bit more and work on finding the places to mark the "ruler" I've added to it described below. I kept my trips outside brief and no more than necessary!
I noticed that with the three supplied 33ft radials deployed full length I measured a 1:1 SWR on both 40 and 20 meters. But on 30 meters, 2 to 2.5:1 was the best SWR I could get. It occurred to me that the issue might be the length of the radials. So I shortened the radials to about 25 feet (an estimate) by winding the ends of the radials back onto the winders eight turns. The SWR dropped to about 1.3:1. So clearly the radials should be some length divisible by the wavelength of the antenna at a given frequency for optimal SWR.
The supplied 33ft radials are roughly 1/8 wavelength on 80 meters, 1/4 wavelength on 40 and 1/2 wavelength on 20 but "nothing" on 30 meters! I guess I'm not surprised but this reinforces that. Makes me wonder about the optimal length of the counterpoise for other antennas such as the 35 ft. end fed and half wave end fed antennas.

The other two photos show a bit more detail of how I attached the ruler. They also show how I wrap up and secure the feedline and radials for transport without taking the antenna apart. I especially like the DIY wire winders with the radials wound on them in a figure 8 wind which keeps them from tangling, a major hassle with all wire used for antennas. 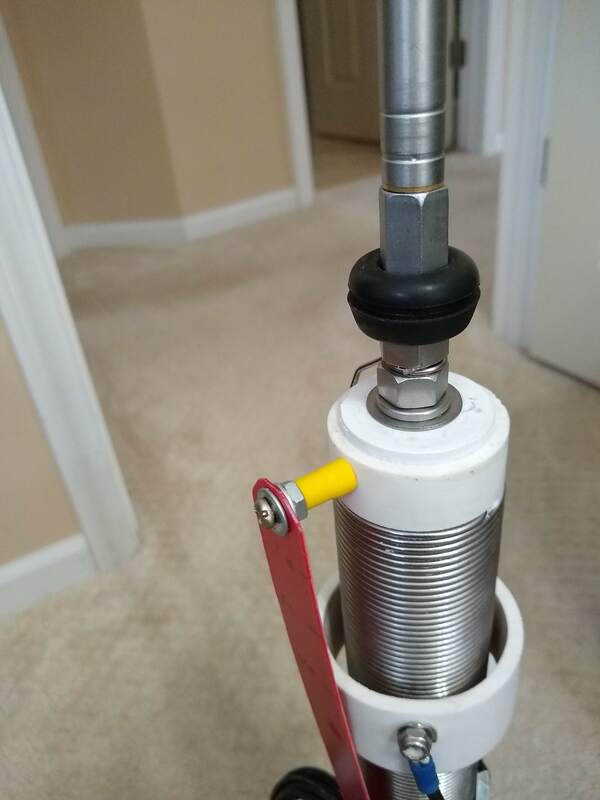 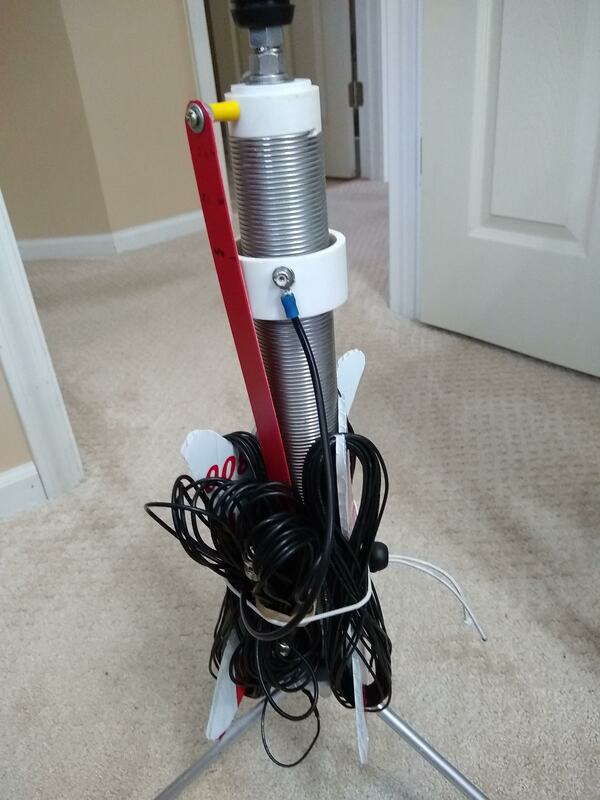 Playing in a winter wonderland

2019-02-04 I just can't avoid giving into the temptation to do "semi-portable" operations. So, this afternoon I set the Silver Bullet 1000 TIA up on the front sidewalk again and spread the three radials across the fast-melting snow in the yard. It was 41 degrees.
After tuning around a while I decided to heed the suggestion by VK3YE in his book Minimum QRP by tuning to the 20 meter QRP calling frequency of 14.060 and started calling CQ. After about five calls WA5DSS came back. From 1063 miles he gave me a 569. He was a 579 in here with fairly deep and slow QSB. He was also running five watts but into a beam. Thanks Bill!! We had a solid copy twenty minute rag chew! My semi-portable outing was a success!
2019-02-02 Well it warmed up 60 degrees from yesterday morning to 35 degrees this morning! What a welcome change. Since it is so balmy, I decided to set up my new Silver 1000 TIA antenna on the sidewalk between the walls of snow, with the three 33ft radials sprawled our across the snow and see what it might do. With the whip fully extended it only took a couple adjustments of the tuning collar to get a low SWR at 7.258, the MidCars frequency. 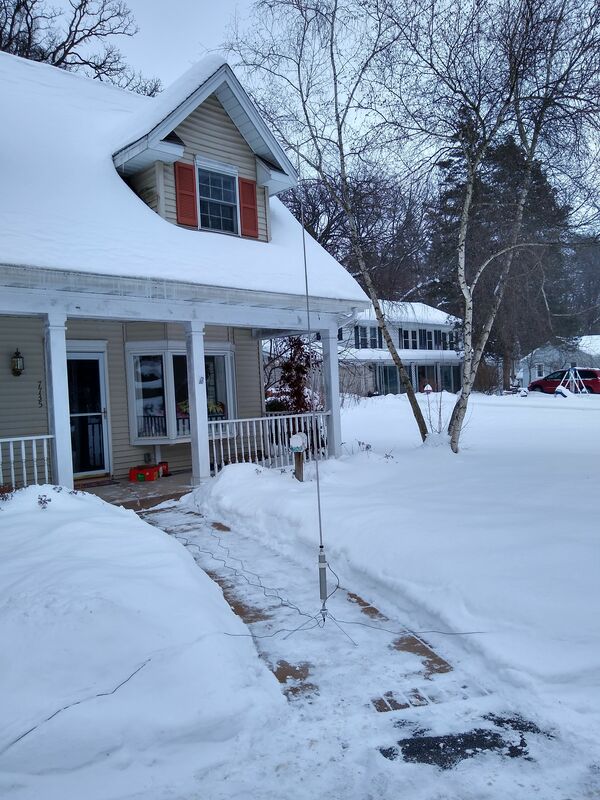 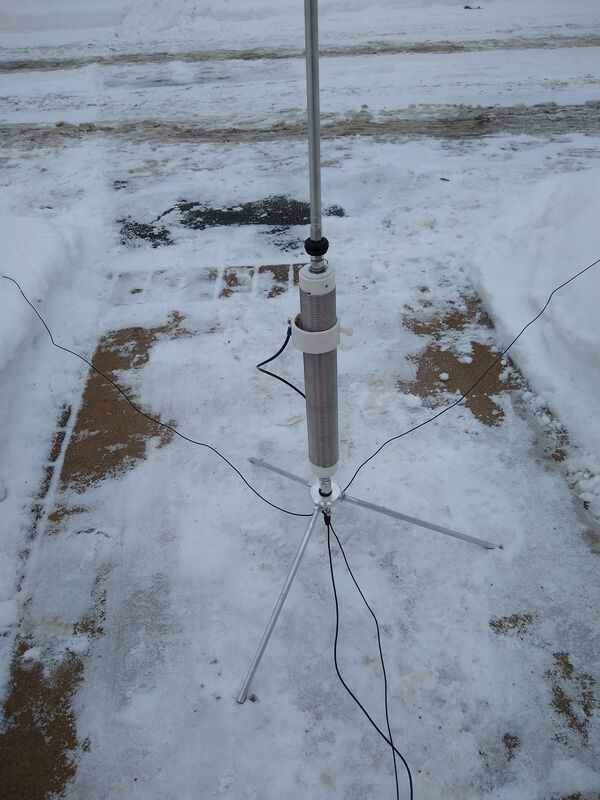 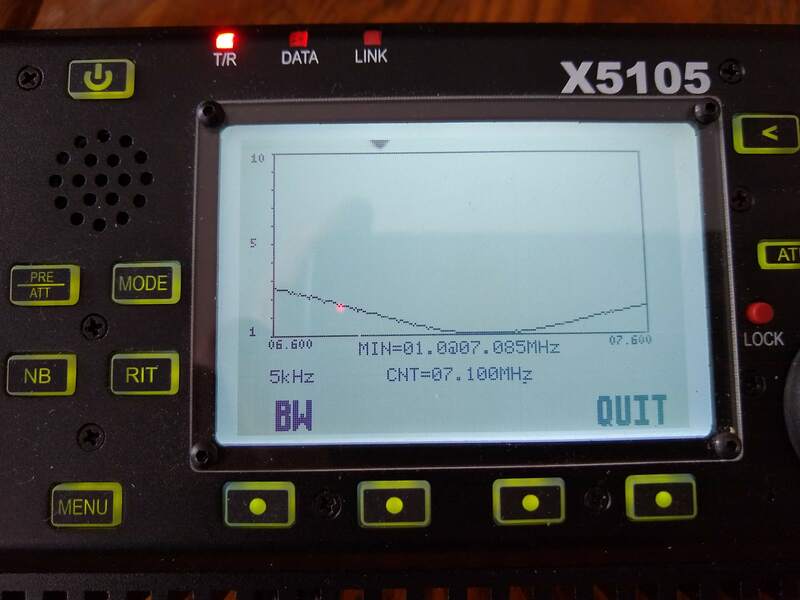 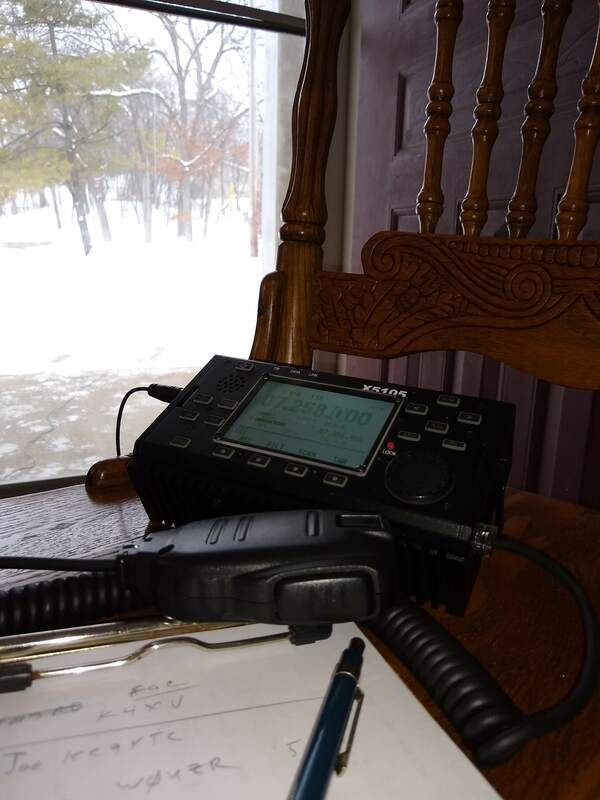 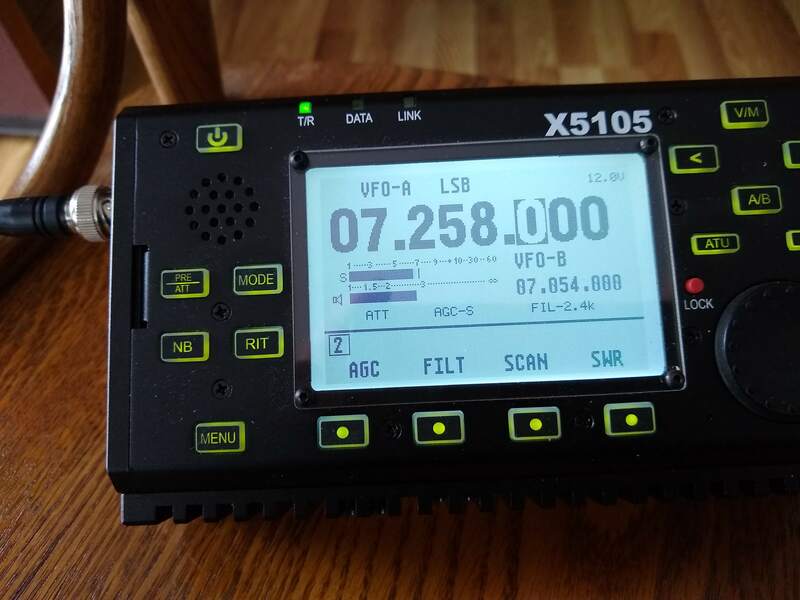 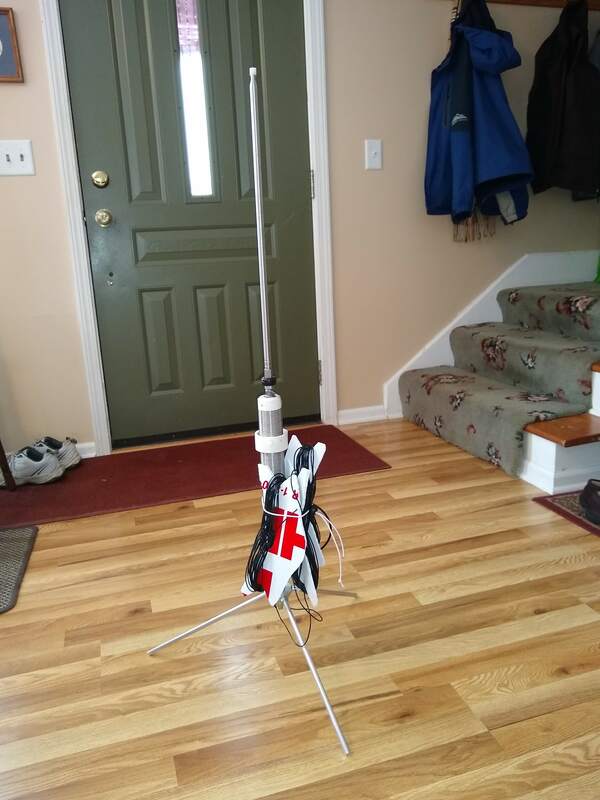 Joe, KC9YTC in Indiana was booming in at 59 so when he called for stations I gave him a call. I was using my X5105 5w transceiver. He came back and gave me a 57 signal report! Wow, was I happy! It was about 9:30am CST. Splatter from stations at 7.06 caused us both problems but we concluded a successful contact. The pictures above show the antenna setup, tuning collar position, SWR sweep, rig setup, KC9YTC's signal level and the antenna and counterpoise all ready for the next deployment! My observations from this experiment?

2019-01-31 The temperatures here in SE Wisconsin are still ridiculously low, (-25 at my house overnight) so no outdoor trials of my just acquired Silver Bullet 1000 TIA. But I have been tinkering with it. One concern I have is that with the twelve inch tripod legs and a 10" whip attached it might be top heavy in a windy location. I have a couple guy rope collars for use with my push up fishing poles for use with my end fed, trap, fan and link inverted vee antennas so I decided to come up with an easy way to use one of those collars when needed. My solution, pictured below is to push a 3/8 inch rubber grommet over the coupling at the top of the Silver Bullet 1000 coil. My collar then sits on top of that grommet and should hold the tripod firmly in place without interfering with the normal operation of the coil. That allows me to utilize the collar and guy ropes I already have without any modification to either the collar or the antenna. And the only cost was the grommet, just under $4 with tax. Seems like a win! 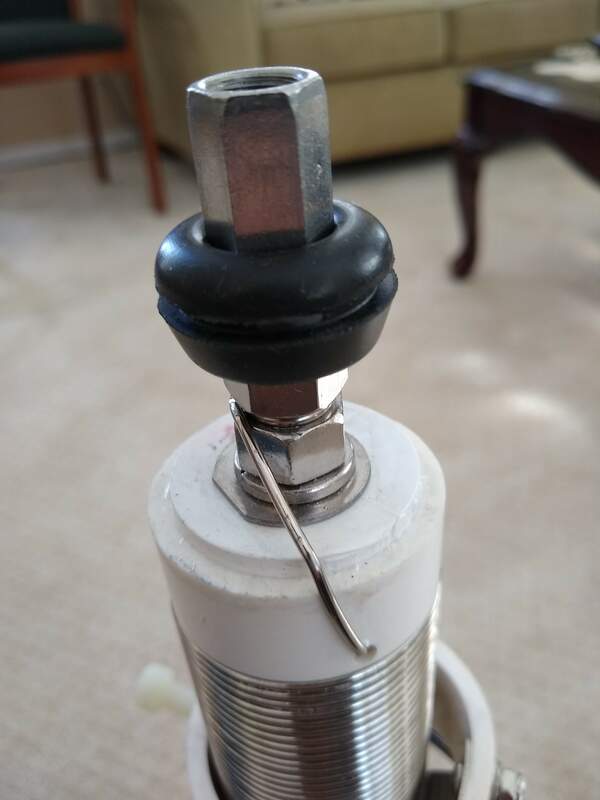 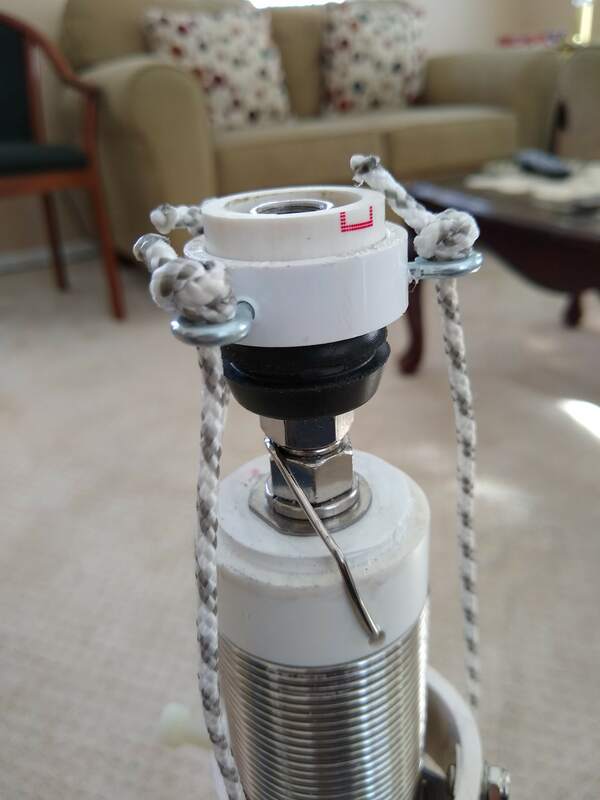 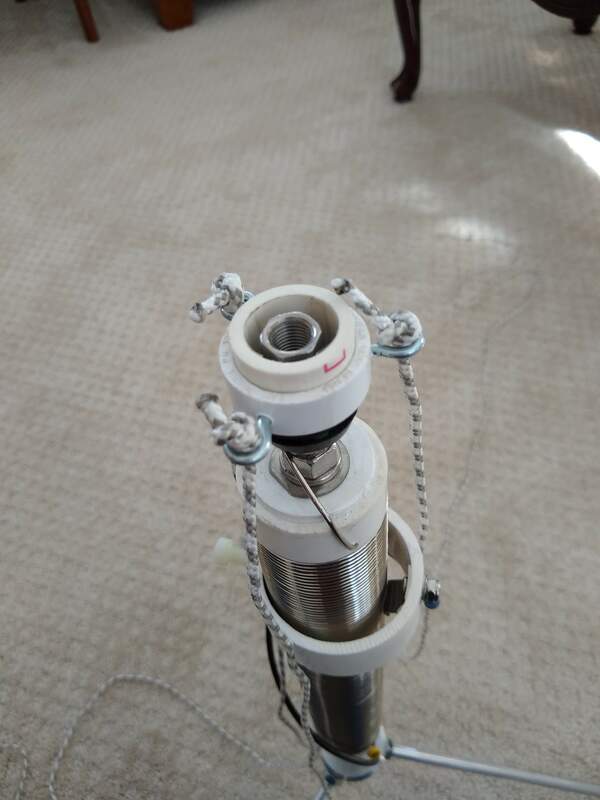 Now I really can't wait 'till the weather warms up a bit. Tonight it is supposed to hit -28 or so! And tomorrow clear up to about -10. So it won't be tested outdoors in the next two days for sure!