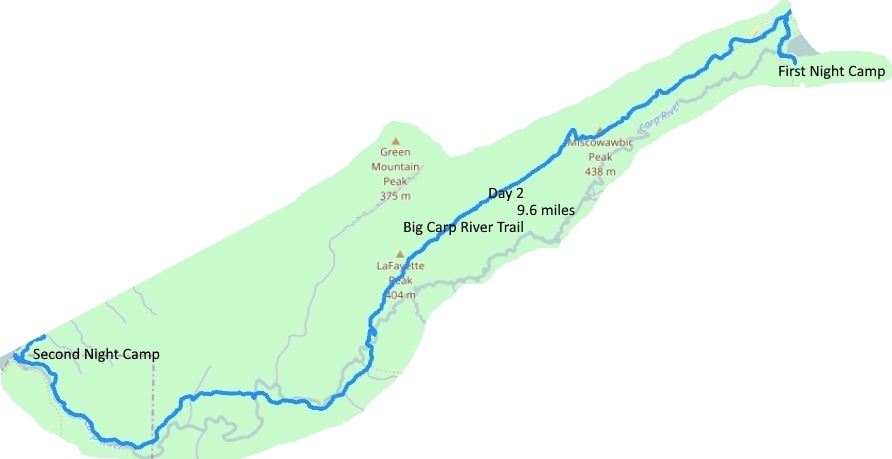 ​Around noon had lunch in a beautiful and impressive section of old growth forest. The huge trees all had trunks from a couple to several feet in diameter and the tops were simply “way up there” with ever-green type leaves or foliage. I don’t know my trees so don’t know the proper names for them. At one point, we were walking along sort of a
shelf so that the tops of the trees below were at or not far above eye level. And we were standing in tree filtered sunlight, on brown almost felt like dead vegetation under our feet, little or no undergrowth with huge trunks and tree tops about 20 to 50 feet apart, as far as you could see. It was almost dream-like. We found one long-downed tree to sit and lean on as we ate our lunch of tuna and salmon wraps with mayonnaise, Cheese-its and water.
​After lunch the trail, which was now the Big Carp River Trail began to slope gradually downhill toward the Big Carp River valley. The trees also began to change to the less uniform hardwoods and pines as the trail zig-zagged among them. We also began to find more water standing around and in the trail. The water was easily avoided but increasingly took more care to avoid. All along the way to day we again saw evidence of the recent ice storm with downed trees. The usually didn’t interfere with our travel much but occasionally required some problem solving to get past.
food items, etc. and most hikers talk quite a bit how those always seem to appear just when you are about to call it quits! Well, I now believe in REAL trail angels. As we rounded a section of the trail, obviously nearing our crossing because the trail was right alongside the river there were two huge trees across the river. The lowest one was about four feet above the bank, washed there by the raging river with its root ball jammed against the far bank and its top snagged in the trees on our side. And just above it, maybe three feet and to its left about a foot and a half was a second one, similarly wedged into the banks, like a custom-made hand rail! And though there wasn’t a ladder to use in climbing up onto that tree there were strategically placed branches that you could both climb and grab onto to hoist yourself up there! The “foot path” log was about two feet in diameter so you practically had a flat walking surface! NO human, no matter how angelic their heart may be could have put those there. But God simply washed them down the river and into place just where WE needed them to be!
Our hike today covered 9.6 miles and we averaged 2.2 miles per hour. Our highest elevation was 1492 feet and the lowest was 653 feet. Our steepest grade was 43.8%. For the record, I think this is the longest single-day hike I've ever done with a backpack!
​It was about 5:00pm when we arrived. After unpacking our bags, I set about building a fire as the temperature was dropping and clearly it was going to be a chilly night. Even Charles was amazed by my fire building skills and before long we had a raging fire, nearly running us outside!
​Dinner today was PakcIt Gourmet’s Dotties Chicken and Dumplings along with a tortilla and PackitGourmet salsa appetizer, ending with pistachio pudding. We liked it better than the carmel flavor of the night before.
​By now it was dark so we dawned our night clothes, crawled into our sleeping bags and slept like rocks, more-or-less. John banked the stove fire and shut down the dampers but sometime during the night it faded away leaving our sleeping bags to do the job, which they did well. It was great to go to sleep with the sound of the river and lake in our ears. It was another bright moonlit, chilly night.