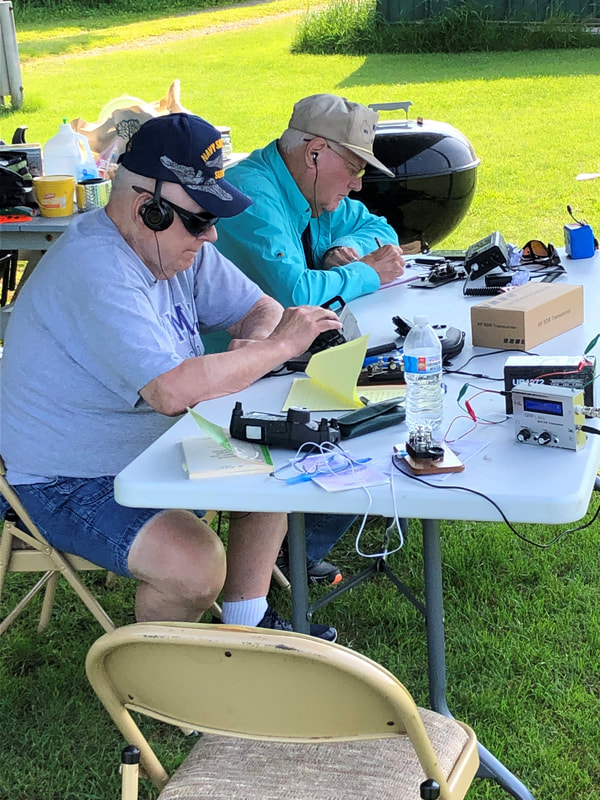 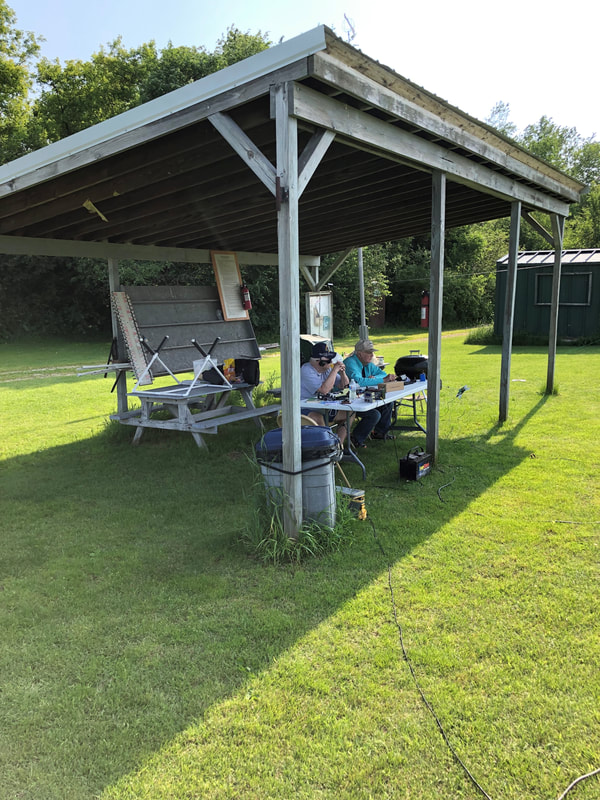 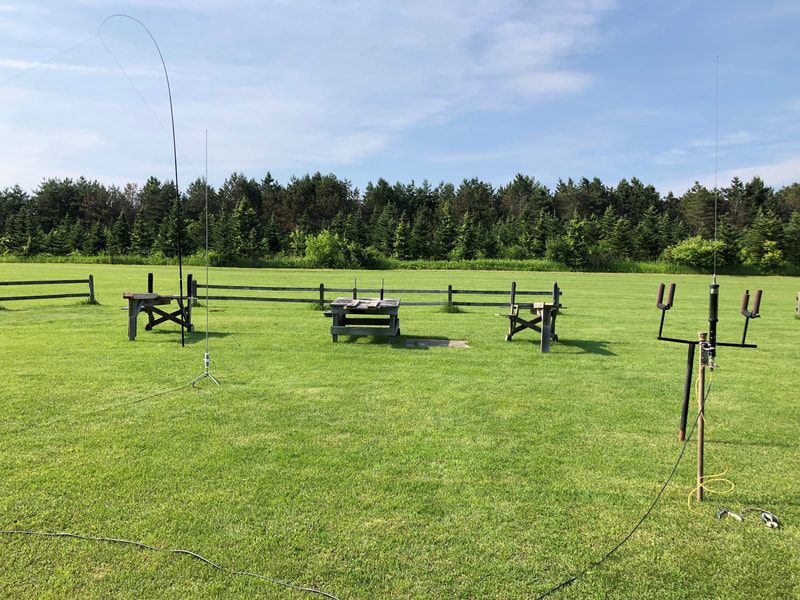 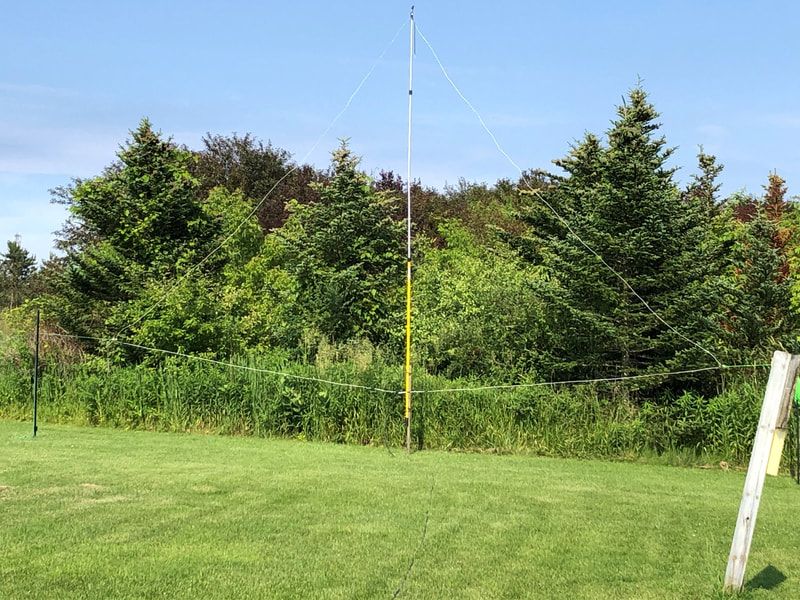 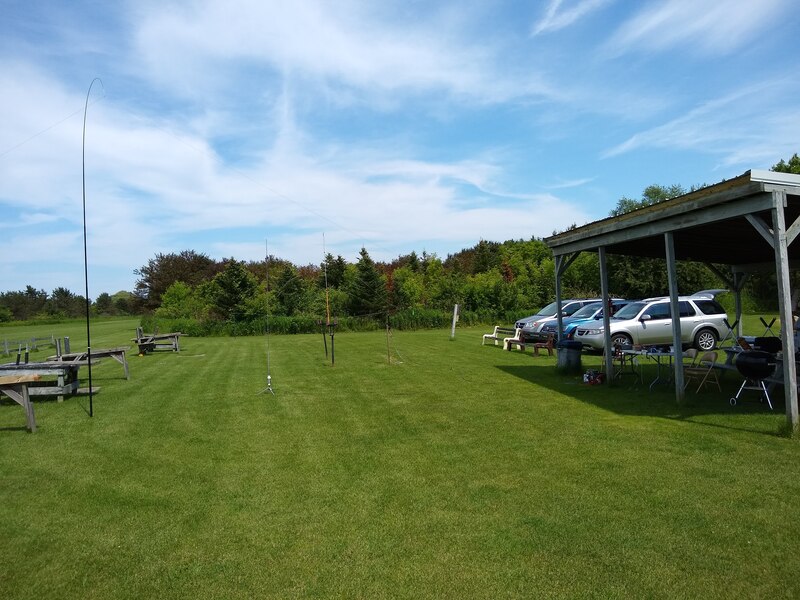 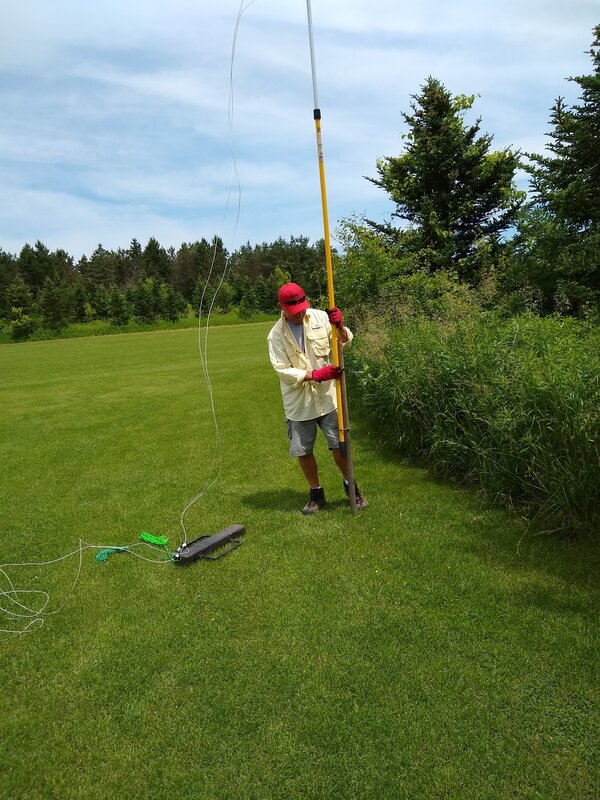 2019-06-23 Yesterday, as planned Carl, AF9L and Jerry, N9AC and I, K0BXB went out to our local Silver Eagles RC Flying club site and set up for 2019 Field Day. We operated 3AB WI meaning 3 station non-club group all battery powered. The WI stands for Wisconsin. After while we dropped the 3AB in favor of 3A as few of the stations we talked to seem to know what to make of the B! That, even though it is clearly addressed in the rules.
My station consisted of my Xiegu x5105 5 watt QRP transceiver powered by its internal battery. I had a Bioenno Power 4.5 Ah battery along but never needed it. I had three antennas, a 29ft end fed based on the QRPGuys 40m-10m UnUnTenna , a 40 meter end fed half wave based on the QRPGuys Portable No Tune End Fed Half Wave Antenna and my Wolf River Coils Take It Along (TIA) antenna with their mini coil. I started out with the 29 ft antenna but no one seemed to be hearing me so I switched to the EFHW antenna. Most of my thirteen contacts were on that though a couple were on the Wolf River vertical. All my contacts at the field were on either 40 or 20 meters, most on 40 CW. I tried SSB a few times but didn't get any replies.  Kind of a tough for 5 watts SSB due to the heavy congestion.
I had the EFHW set up as an inverted vee with a 20 foot Shakespear Wonderpole supporting the apex at the approximate center. The QRPGuys  49:1 transformer was tied off to a C-clamp on the edge of our 3 ft by 6 ft table with a three foot piece of RG-174 going to my transceiver. I ran a short ground wire to an aluminum tent peg pushed into the ground immediately beneath the transformer. The far end was tied to another tent peg using a 3/16 diameter piece of shock cord about five feet long making the end of the antenna itself about three feet off the ground. That antenna seems to be a very good performer.
Jerry put up a hastily built 20 meter delta loop with the center about 20 feet up, supported by a fiberglass painters pole. The two lower corners were tied off with rope to four toot tall fence steaks. He fed it with a very long piece of RG-8 or equivalent. His primary transmitter was was a 20 meter QCX he built from the QRPlabs kit. He was racking up the QSOs, some very impressive. He also had a Little Tarheels II mobile screwdriver antenna mounted on a fence stake with several wire radials laid out on top of the ground. He had contacts with it as well as with the delta loop. He had his kit built 4 States QRP 40 meter rig and made several contacts with that as well.
Carl strung up an MFJ 40-10 EFHW antenna. The transformer was about 8 ft above ground on the corner of the lean to we used as cover from the sun. The far end went to a tree off in the distance. The angle was pretty low but it seemed to work well. He didn't make many contacts but listened on 80 through 10 hearing lots of signals on most of them. His rig was a Recent RS-918. That is a very impressive little SDR transceiver. One question this experience brought up is about its handling of strong signals. It seemed to suffer more than either my x5105 or Jerry's QCX from our transmitters. I've since learned that this is common to may SDR rigs because they don't have any front end filtering. Though to be honest inter-station interference was an issue for all of us which we had to work around. Our antennas were very close together.
We didn't set any records for contacts but we had fun. The variety of antennas was interesting. I was particularly impressed with Jerry's Delta Loop. I've read about those for years but this was the first one I've actually seen up close and personal. I was impressed by its simplicity in both design and construction. It's honestly nearly as simple to erect as an EFHW antenna. And it worked pretty well for Jerry. Both the Little Tarheel and Wolf River Coils verticals work. The simplicity of setting up the Wolf River Coils is it's strong point. The Little Tarheel's strong point is ease of tuning. That is the down side to the Wolf River Coils one. Manually tuning it can take a while. I had not used the mini coil before so had to find it's resonant points using the "hunt and peck" method. I need to come up with a way to mark the coil wiper position for the various bands (I did that for my TIA 1000 coil) which would make it much more convenient to use.
We arrived at the field about noon and were on the air by 1:00pm, 1800 hours UTC. We shut down, packed up and headed home about 5:30.  Later that evening I made a couple contacts as a 1D (home station) using my x5105 and G5RV antenna, both on 20 meters. Then this morning before heading to church I tuned up on 15 meters and had two more contacts. The 15 meter ones challenged my assumption that fifteen is dead most of the time! I have this feeling that the bands are "dead," not always because God shuts down the propagation, but because we hams quite transmitting on them! That feeling is increased by my experience recently that even at five watts if I just keep calling CQ I almost always get a contact!
In summary, this was a really fun and rewarding Field Day, even without an overnight. Or maybe because we didn't spend the night! :-) I'm looking forward to next year and hope I'll get out and do some other portable operating in the meantime, mybe even become a POTA activator.

What is and Why Field Day?

According to the ARRL website,"2019 Field Day will be held June 22-23, 2019.  Field Day is always held on the 4th full weekend in June."
Ham (Amateur) radio operators pack up their radios and other stuff and head to a park, the wood, the back yard, really anywhere other than in their houses, set up and try to make radio contacts with as many other hams doing the same thing as possible! They take along generators or batteries because they aren't supposed to use normal means to power their equipment, string up antennas in trees or makeshift poles or wherever they can, again because they are not to use permanent installation. The event lasts for 24 hours so some set up tents or other creative housing, build fires or light barbecue cookers and spend the entire 24 hours. Usually all that is done with friends who share the same love of all things radio. All that to see if, in fact, they can do it! Why? Keep reading! :-)
So bring it on! Field Day 2019!!
2019-06-13 It's confirmed. We're doing it, just a half day on Saturday. Plan is to go out to the Silver Eagles RC Flying Field, same place KD9KHI and I worked from last year. I think we'll all be QRP. Looking forward to it.
2019-05-23 Our Field Day activities are changing. We're going from a two day overnight event to a Saturday Afternoon only one as one of the key players is going to be unavailable. But three of us are beginning tentative plans for the Saturday only event. We'll likely be QRP only, at least I will. And if I had to commit now I'd go with my End Fed Half Wave 40/20 antenna. It requires no tuner and seems to perform well on both bands. Second choice would likely be my 35 foot End Fed random wire one. I don't think (but can't prove) it performs quite as well but is nearly as easy to set up and does give me all-band capability. Stay tuned! 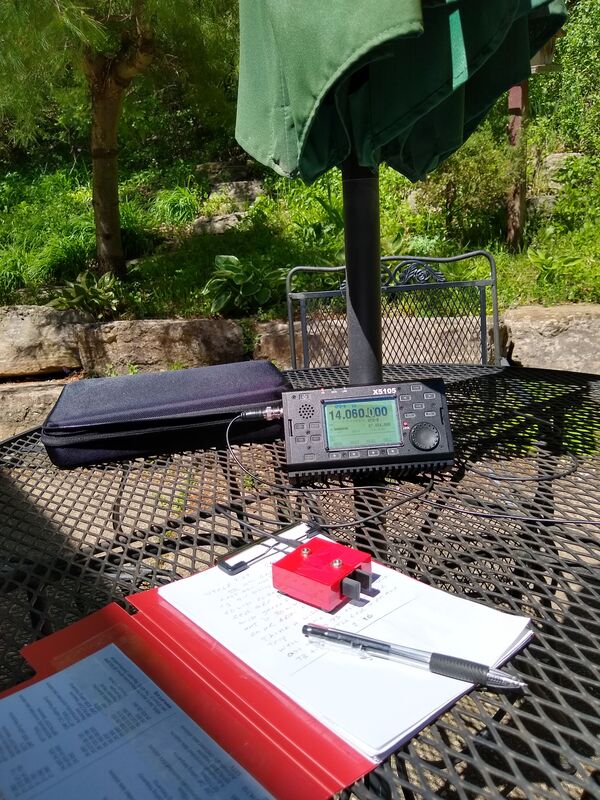 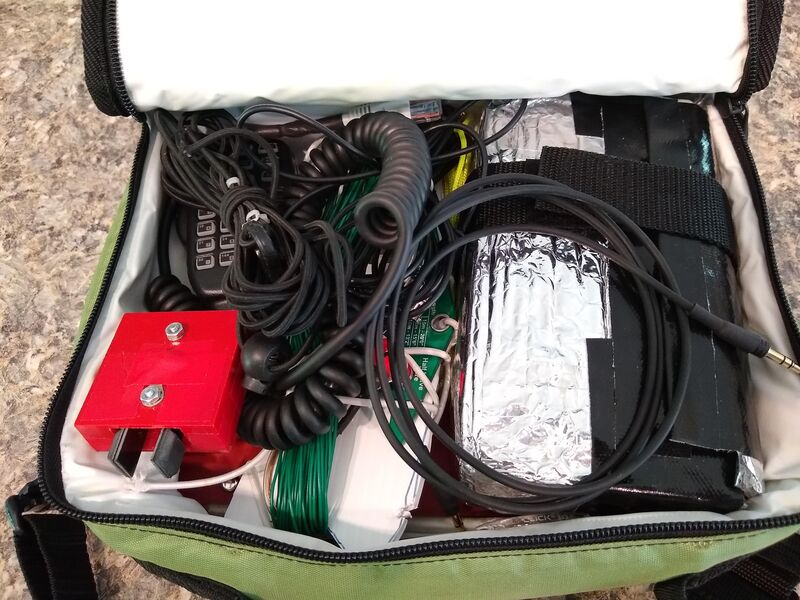 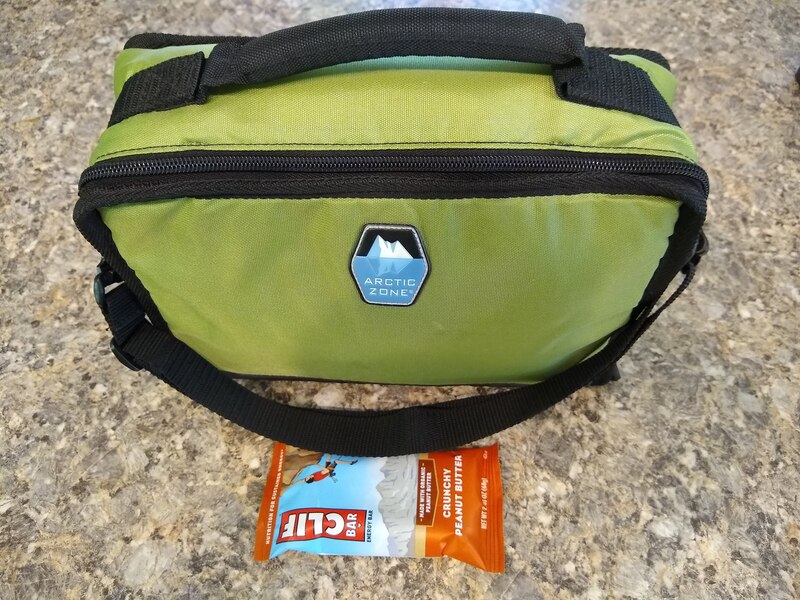 Left: Testing setup in back yard. Center: Everything in the bag. Right: The four pound setup ready to go.
Rig wise, I'll use the Xiegu x5105 as described below. For power I'll use the internal battery of the rig and have the Bioenno Power 4.5 Ah battery at the ready. Based on my experience to date I think the internal battery will carry the afternoon. Housing and food have become mute points as I'm guessing we'll set up after lunch and break down before dinner. And if current weather trends continue we should have nice weather as far as temperatures go. Rain?
I'll be testing out the setup on a two night camping trip my wife and I have planned next week and again on the Boundary Waters trip my two sons and grandson have scheduled for June 6-10 in northern Minnesota.
2019-02-19 A post on Facebook reminded me that now is the time to begin planning for that. The questions are, where? what? and how? And the big question most ask if they care at all is WHY? So, since here in southeast Wisconsin the snow is still 18 inches or more deep, the temperature was about zero last night and even now in the bright mid morning sunshine is only 17, AND another 1-3 inches of snow is forecast for overnight tonight, WHY is a really about the only question one can answer definitively right now!