Cooking with the Trangia 27 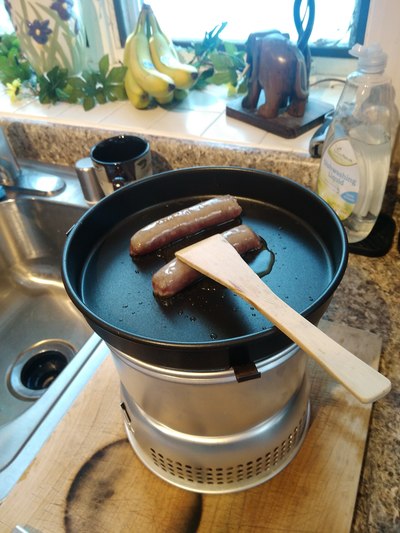 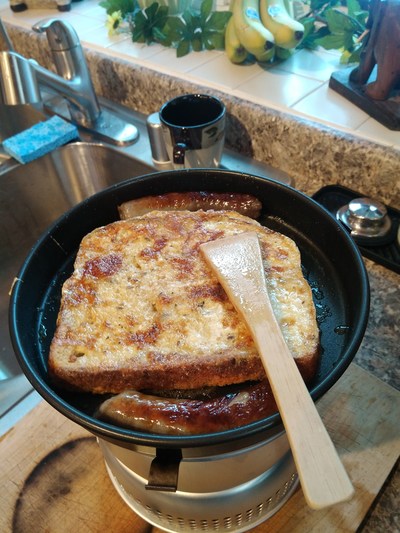 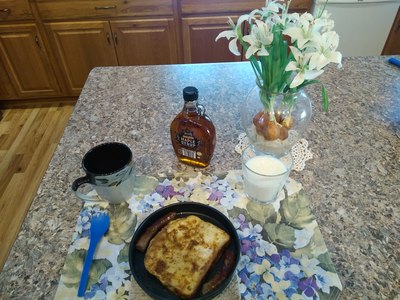 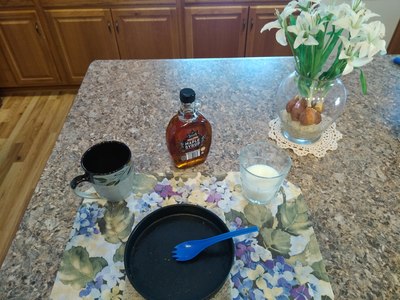 Fixing and enjoying a French Toast and Sausage Link Breakfast!
2018-04-19 Not sure what the indications of the onset of "second childhood" is but I am getting a bit concerned about myself. I can't seem to quit playing with my new Trangia-27 UL Cooking System! This morning the thought of French toast caught my attention. As I was letting that thought sink in the next thought was, "Yes, on the Trangia!" So I had at it. As the pictures above show it worked. Twenty minutes from that second thought and 1-1/2 oz of alcohol later, I had "done it" including licking my plate clean! And don't tell anyone, but it was fun!
It also provided a legitimate opportunity to use my newly hand crafted wooden spatula, which worked great. It brought up a challenge I've had with the Trangia all along. When you finish your cooking, how do you go from using the simmer ring to slow down the fire, which it does nicely, to using it to snuff out the fire with nothing but a wooden spatula, wooden spoon and pot grabber?! The simmer ring lid, that sets the simmer level, doesn't move freely enough to just tap it closed. If you try to remove the thing from the burner it is very hot and awkward to handle and invariably flips over on its back making it even harder to grab. There has to be a better way using the "tools" likely to be at hand in the wilderness!

Not sure if I am disappointed but I am scratching my head. Looks like I might be trading fuel usage for compactness of kit. I'll do it again keeping track of the fuel weight difference between the two pots and hence overall weight gain or loss.
The definitive test is done. I boiled one cup of water once more in the Optimus and twice more in the Trangia 0.6 liter kettle. The time to boil varied but the weight of fuel was the same. It took a quarter ounce of denatured alcohol to boil one cup of water in both pots, while the time varied from 2-1/2 to four minutes. The Trangia always took longer but each burn used exactly 1/4 oz of fuel by weight.
One factor that affects boil time is how hot the burner is at start. From a cold start it took four minutes to boil the Trangia. The next boil was with the Optimus kettle and took 2-1/2 minutes. I let the burner cool down between those two burns to where it was just warm to touch. My final burn was back to the Trangia and took three minutes. Again I tried to cool the burner first but it was somewhat warmer than before.
My conclusion is that in the overall scheme of things either kettle is fine and efficiency is not the primary issue. Since the Trangia pot nests into the two pans and then into the whole kit, it is the most convenient so will most likely be the kettle of choice.

2018-04-12 This morning I decided to do a different test of my Trangia Cooking System. How long does it take to fix a meal with it. So I set the timer. Then I went to "my room" and got the Trangia brought it to the kitchen and opened it up. The burner still had about half an ounce of fuel so I didn't add any more.
I got the oatmeal and put 1/4 cup in the smaller Trangia pan. Added a tablespoon of dried peanut butter, a tablespoon of chia seeds, about half a tablespoon of brown sugar, a pinch of salt and a cup of water. Just before adding the water I lit the burner to give it a few seconds to bloom and assembled the wind shield/pot hold onto the stand.
While the burner was getting ready I added the water, stirred the concoction and put the pan into the holder, set the frying pan on top and waited. In just a couple minutes it was boiling so I stirred it, removed the pan and put the simmer ring on and then stirred it from time to time until it was ready. That whole process took about ten minutes.
Twenty-five minutes from the start time I had peeled and eaten an orange, washed up everything, packed up and put away the Trangia with no trace I had ever been there! And in its own odd way, it was fun!

2018-04-11 OK, one more soup test! I put two cups of 40 degree left-over ham and bean soup from the refrigerator into the smaller of the two Trangia pans. I put the Trangia outside in the 48 degree weather, in the shade with a bit of breeze.  I carefully added one ounce of alcohol (by weight) to the burner which had just a little in it already and lit the fire. When it was well bloomed, which took about a minute, I put the pot on with the skillet as a lid. Six minutes later the soup was boiling. After I removed the lid and pan and snuffed out the burner I weighed it again. It had consumed exactly one half ounce of alcohol. And the soup was good!

2018-04-09 This morning I decided to make my oatmeal/powdered peanut butter/dried fruit/chia seed breakfast with water heated with my Trangia. I put two cups of water into my Optimus Terra Kettle and fired up the Trangia burner. Four minutes later steam was pouring out of the spout! I was surprised. Based on the fact that it takes three minutes to boil one cup of water, I expected it to take at least five, maybe six minutes. The amount of alcohol consumed was almost negligible. I'm impressed. Of course this is inside with 60 something degree tap water, but still!
One little concern is that since the kettle barely fits into the wind screen, with two cups of water it almost falls into the wind screen. I've ordered Trangia kettle that should fit properly. It will be interesting to see if it performs as well, the Optimus kettle is anodized aluminum giving it a heat absorbing dark color whereas from the pictures it appears the Trangia one is simply aluminum colored.

ALOCS burner in my Trangia Stove

2018-04-08  Some time back I purchased the ALOCS burner which is obviously a Trangia knock-off. So I decided to give it a try in my Trangia. It fits perfectly into the stand. With just a little alcohol in it from the last time I used it, I lit it and put my little Optimus Terra Kettle on it with one cup of tap water. Three minutes later it was boiling vigorously. That was exactly the same as with the Trangia burner a couple days ago.
2018-04-05 Tonight I decided to have another go at baking with my Trangia. The photos below show the ingredients and process.  I didn't measure anything but I'm guessing I used about 1/3 cup of the baking mix, a small handful of the mixed berries and about 1/4 teaspoon of sugar. Doubling the sugar wouldn't be a mistake. I used milk this time instead of water, just enough to make it hold together. Not quite sticky.
I put a bit less than half an inch of water in the cooking pot beneath the cup with the dough. At about six minutes in I checked the biscuit with a toothpick. It was almost clean when I pulled it out. After ten minutes (four more minutes) I checked again and it was clean so I took the pan off the burner.
Observations? Steam baking works about the same as dry baking. When it was finished the water had all boiled away. I don't know when it was gone. I think I could have shut the simmer ring down more. It used a bit less than an ounce I believe. Well, the result is that my wife thought the berry biscuit was good and ate it all! She even said she would eat that on the trail!! That's the jackpot. 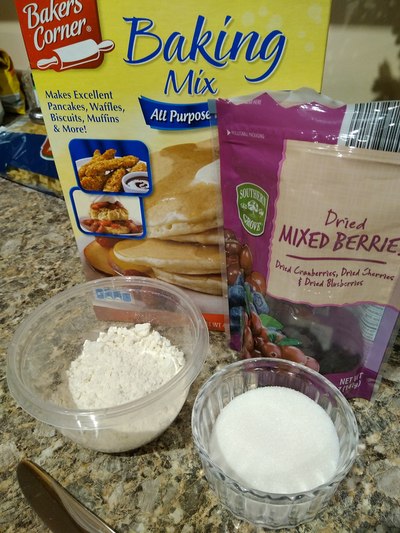 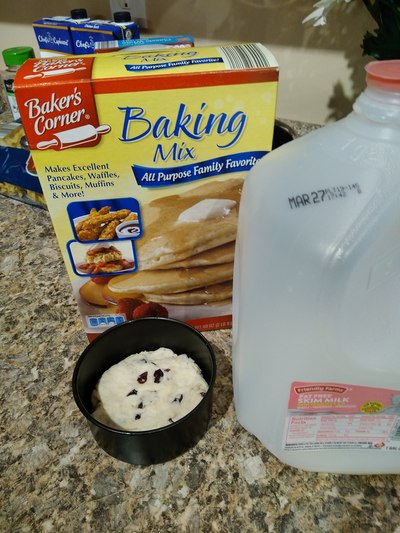 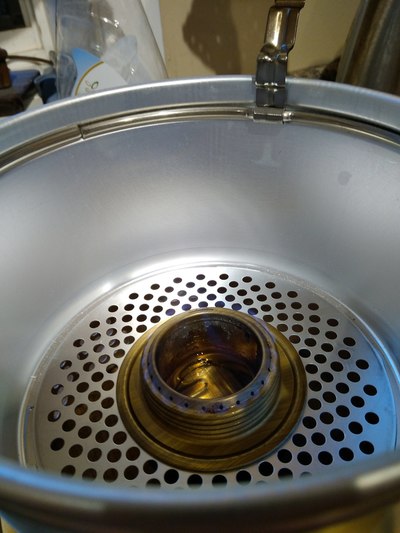 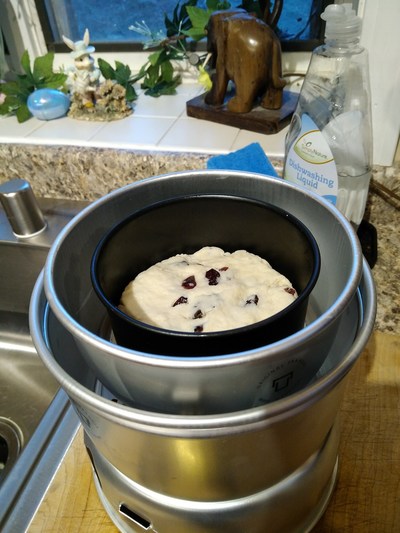 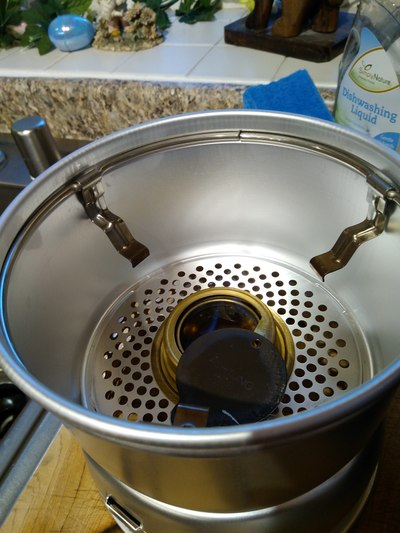 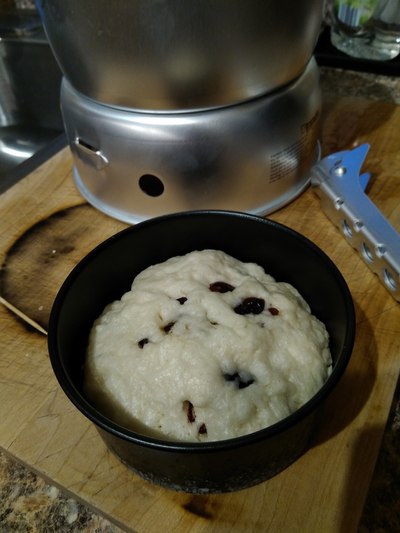 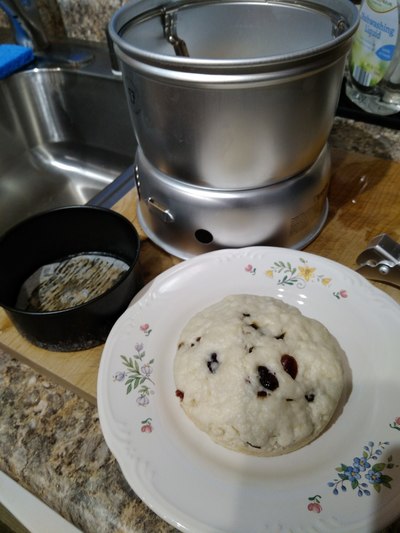 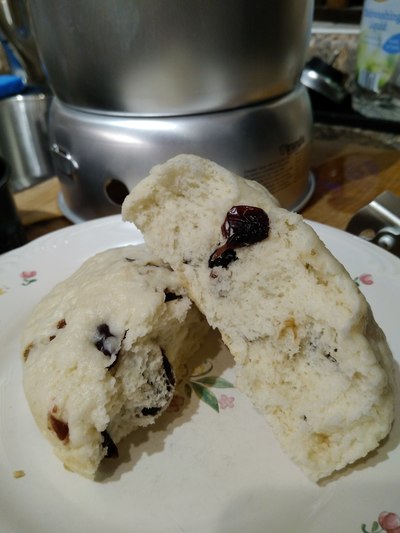 Frying and Baking with the Trangia

bottom, in went the dough. I was really nervous about overheating so watched carefully as it baked. I set the simmer ring so it almost snuffed out the fire but things still got hotter than I liked. The resulting "biscuit" was pretty good, lightly browned on the bottom, baked through and moist.
2018-04-04 Today I fixed my lunch with the Trangia. I cut up a couple small, peeled potatoes and some onion and fried it in the Trangia skillet. When they were about done I added a little half-and-half and then put a chopped up piece of breaded cod in and kept frying. A little garlic salt and pepper topped it off. Not too bad. The burner with simmer ring seemed to work well. The whole thing took about 45 minutes and consumed about 1-1/2 oz of alcohol.