2020-04-25 Reading on Facebook yesterday I saw a post lamenting the disappearance of the small portable pico paddle made by Palm Radio shown below as copied from their website. That got me thinking about trying to make something similar. So I got some 3/32 thick plywood from my RC plane building junk pile, cut it into small pieces and glued them together. The result is the little key pictured below. It is 3-1/2 inches long, 1-1/8 inches wide and 3/4 inch high. Weighs 0.8 ounces. 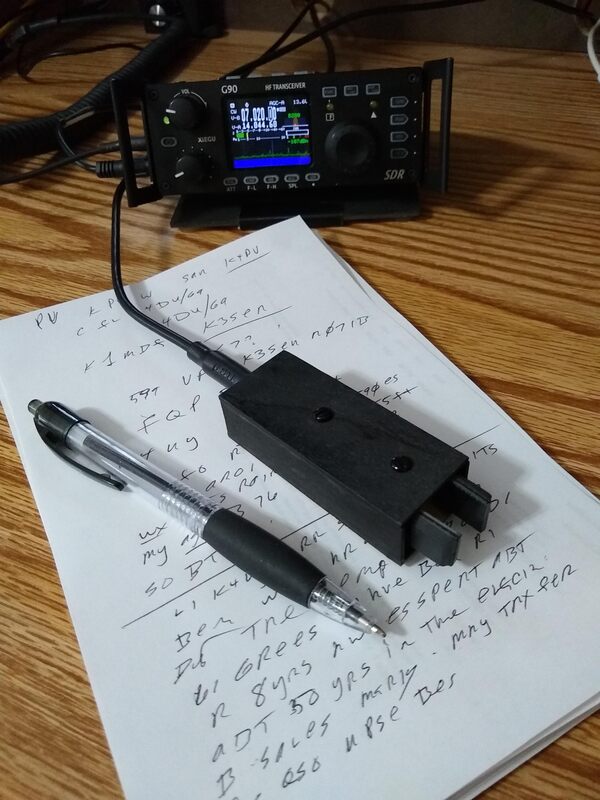 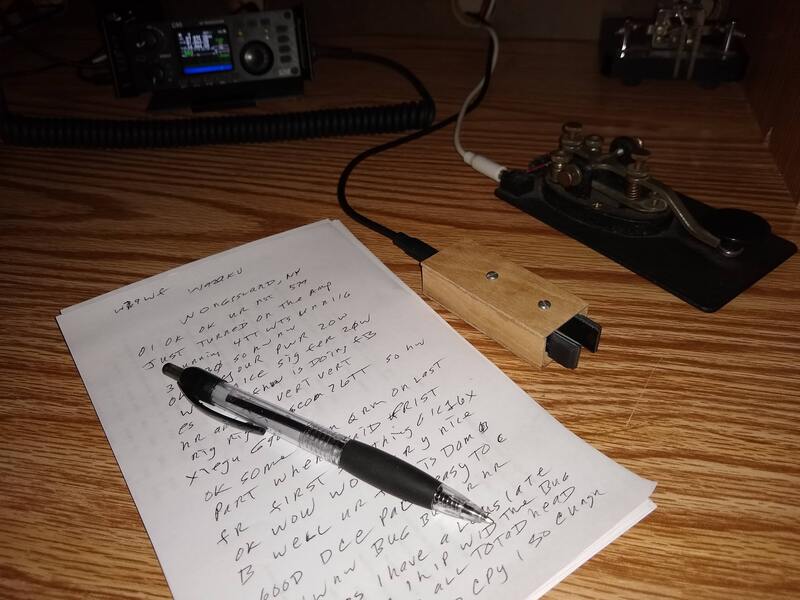 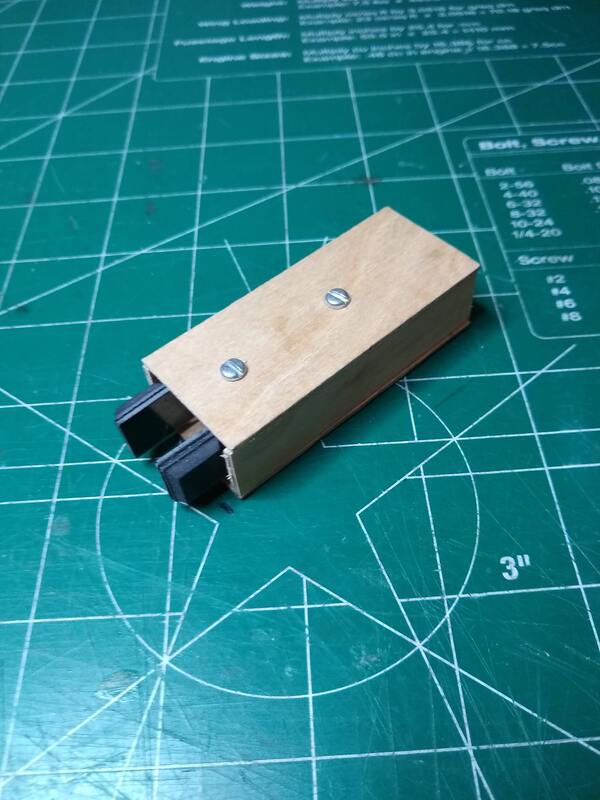 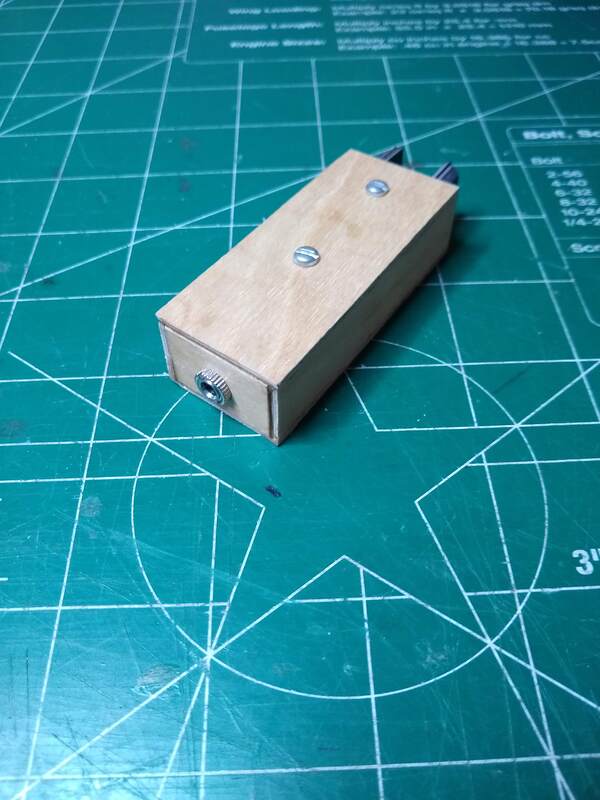 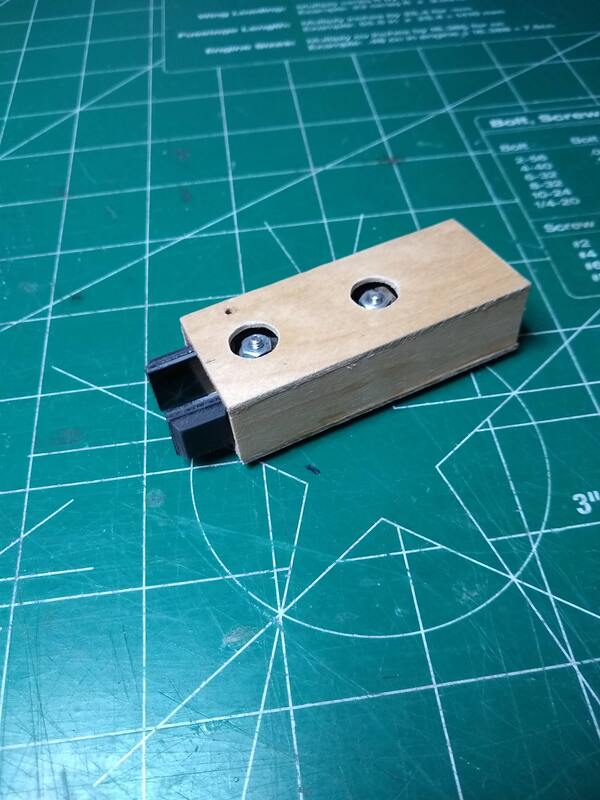 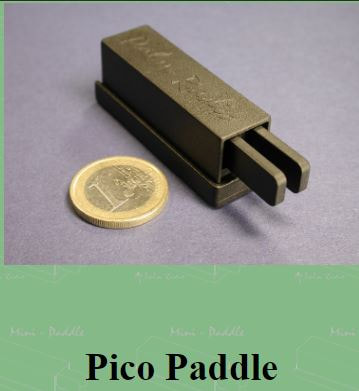 The paddles themselves are from a Whiterook MK-44 Mini CW key I've had for many years shown below. The first photo is after I sanded and painted it. As of this writing, I've had three QSOs with it, two of them nice several-minute rag chews. So far I like it! Seems to "handle" better than in its original form or  even my modified version, both shown below.
2020-04-09 The past few weeks I've been assembling, disassembling and reassembling portable setups based on either my xiegu G90 or x5105. Much of my effort has been focused on portable antennas. But the question of what CW key to use has also been high on my list. I love my WWII Speed-X key and even bought an extra one just for portable at a recent hamfest. but they are heavy and kind of hard to pack with their protruding adjustments. I also love my little modified red paddle but I'm a straight key guy and don't want to be confined to a paddle and keyer. Finally, as shown in the pictures below I made a very light weight and small key using the key arm from a 4statesqrp mosquito rig. But it, and ll the others suffer from the problem of how to keep it handy when balancing the key and a notepad on your lap sitting on a rock or something.
Enter the arrangement shown in the photos below. I figured out how to mount the 4statesqrp arm directly to my modified clipboard so it is always right next to my scratch paper. Just how well I'll like it, time will tell. I've had a couple QSOs with it and I think it will be OK. It has the advantage of keeping the key "at hand" and is small and light weight. I also discovered by cutting down one of those Amazon Prime shipping envelops I can give it a bit of protection and slip it into my small bag along with my x5105, mic, cables, and other miscellaneous items. The resulting QRP go-kit includes just that bag and my 14.5 ft collapsible fishing pole. 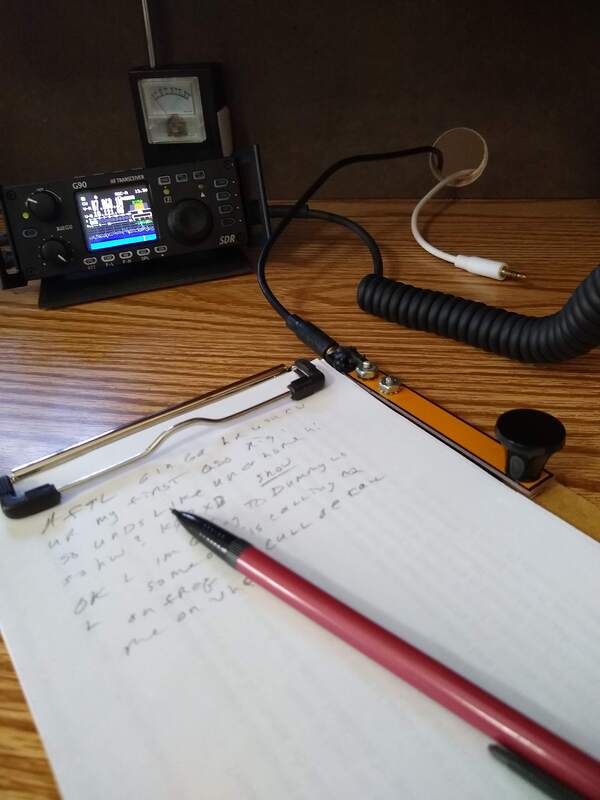 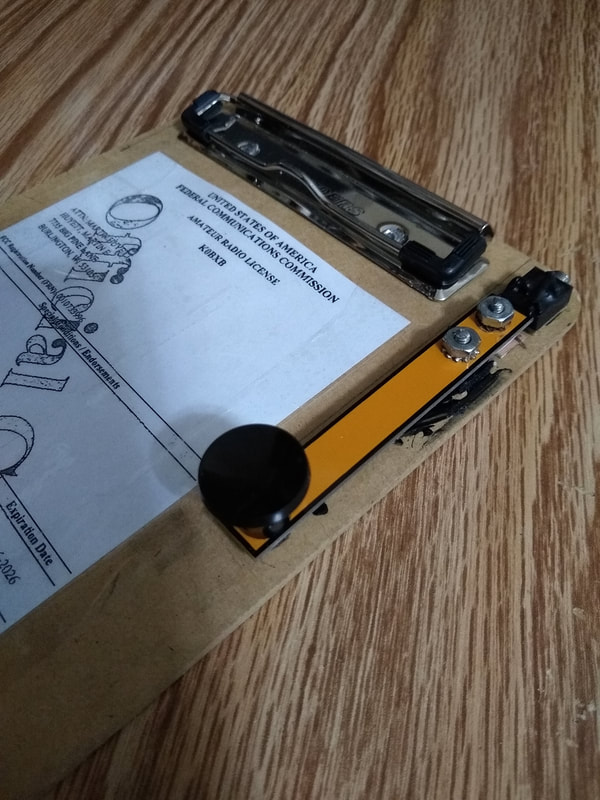 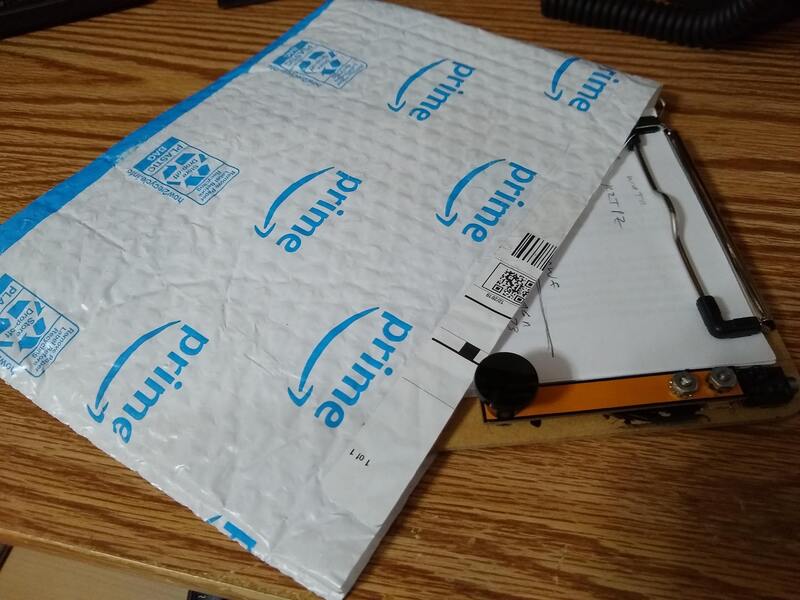 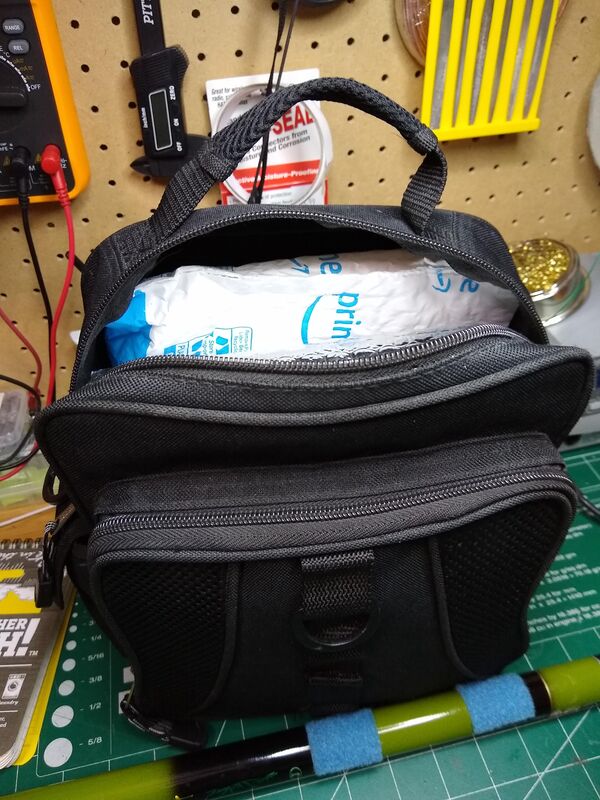 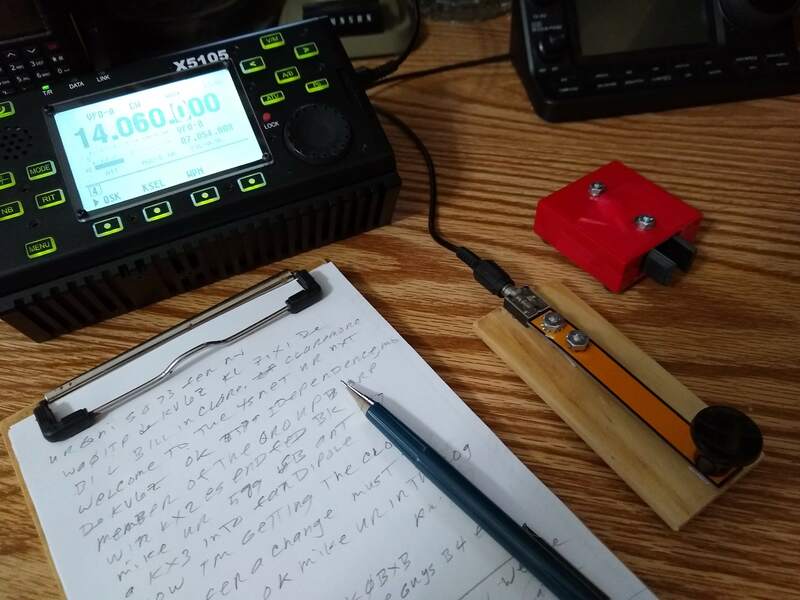 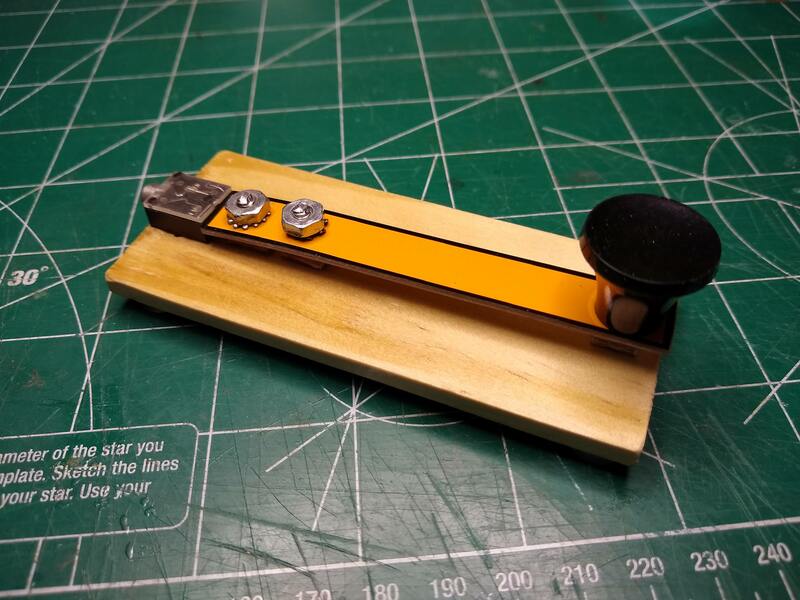 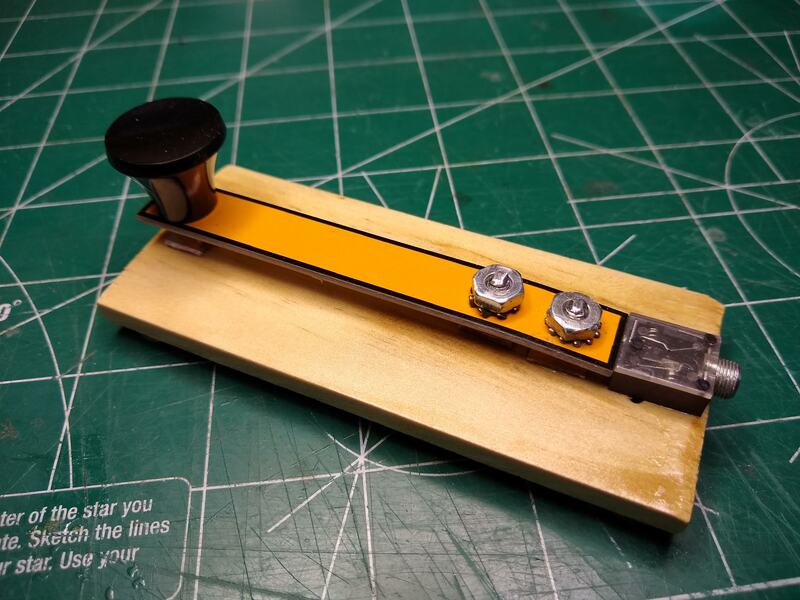 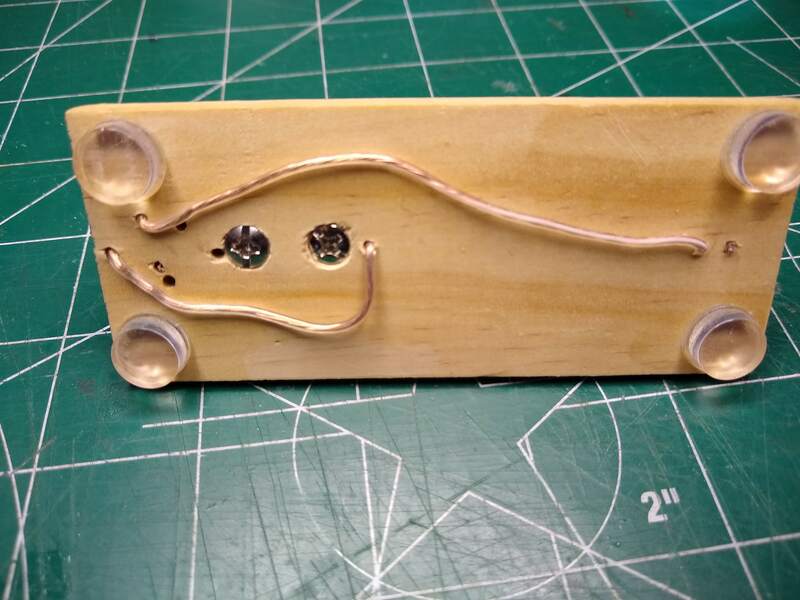 2019-05-02 After modifying my Whiterook MK-44 Mini CW key as described below I took another look at my home brew portable straight key and decided to rebuild it as well. It is now just 1-3/4" wide, 4" long and 1-5/8" to the top of the knob. It weighs 1.1 oz which is the same as the modified MK-44. That compares with 9.5 oz for a J-38 type key and a whopping 2.4lbs for my MFJ paddle! But most importantly, I think both the MK-44 paddle and this new straight key can go with me in my portable QRP bag giving me the options I like for operating anywhere. Plus it was fun to work on both. For me ham radio is a chance to do creative projects like this.
2019-04-30 for several years I've had a Whiterook MK-44 Mini CW key. I've used it off and on here in the shack. But I never took it outside with me in part because it was hard to pack in a small, tightly packed bag along with my other stuff without damaging it. Today, with my resurfacing interest in portable QRP operation including very light weight antennas, small radio, small battery, etc. I began looking at this key again. I had already home brewed a light weight straight key shown below as my J-38 like key was just too heavy and bulky to carry with my other small gear. But today it occurred to me that if I could mount the key levers inside the box-base of the  MK-44 it would be much easier and secure to pack and might actually be easier to use. The photos below show the result. I think it has the possibility of being a good portable paddle to use with my Xiegu X5105 and other portable rigs. Time will tell! The photos below show it before and after my modification. 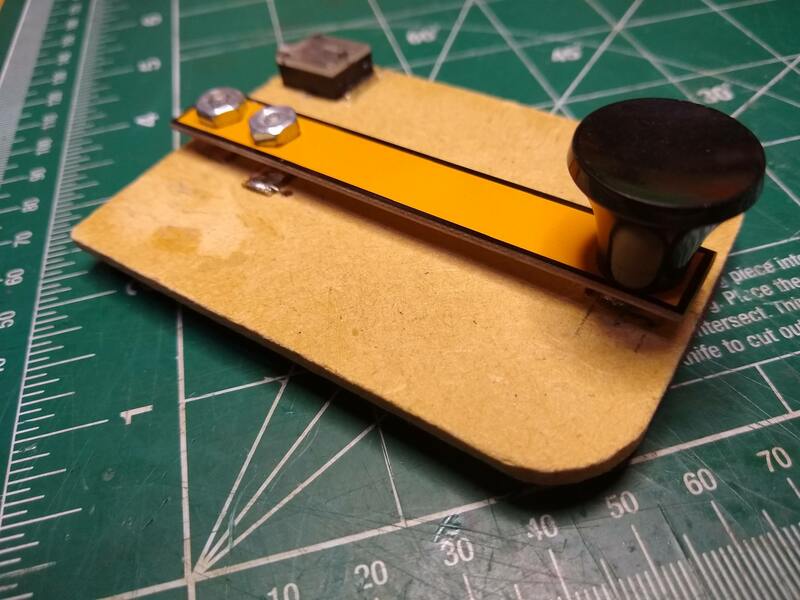 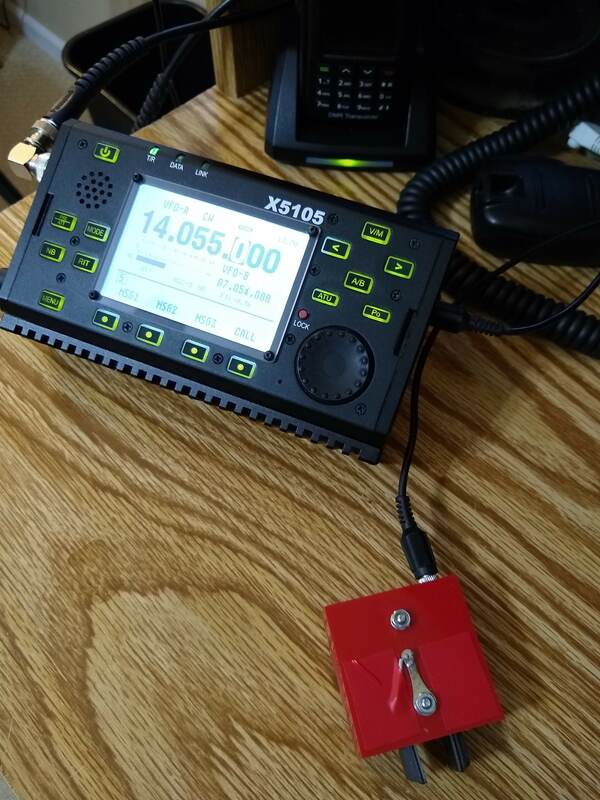 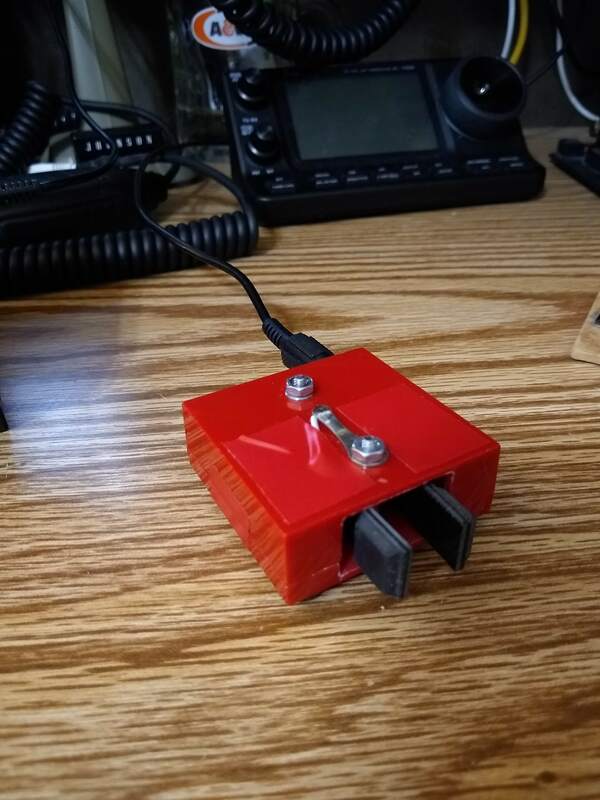 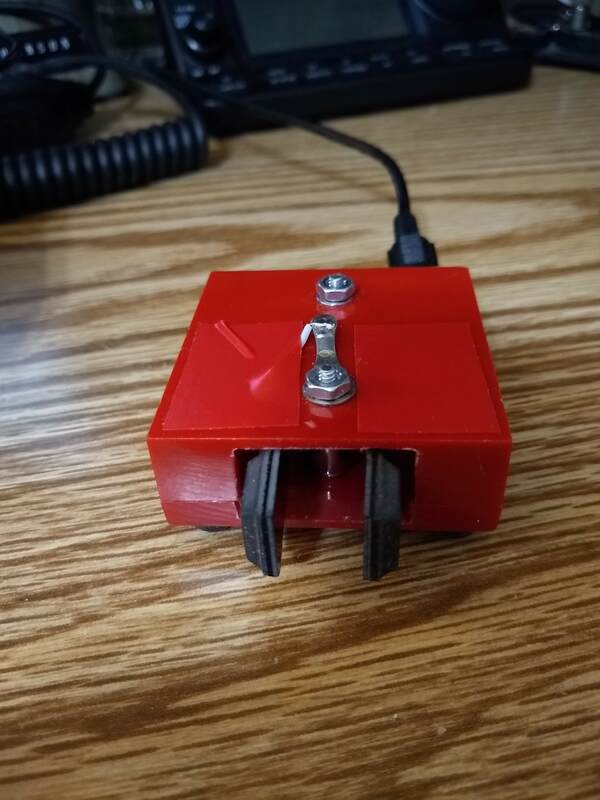 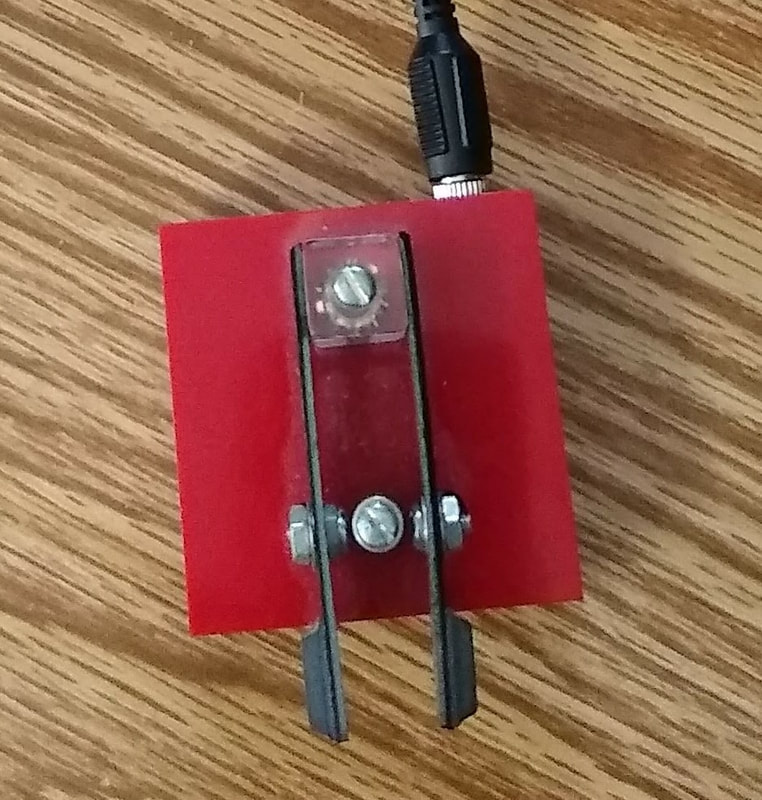