Portable Check List
2020-03-26 Since taking the x5105 to the back yard yesterday I've been thinking about what I might do to make the G90 more portable friendly. The shape, orientation and size of the x5105 make it ideal for portable. It sits easily at a convenient angle on a rock or the ground or a park bench so you can see it and get at all it's controls. On the other hand, the G90 is long and thin with the controls on the end. It is hard to place it so you can see the front panel when you are using it on anything other than a table, and even there if it is much below eye level it is inconvenient. It does have a removable control head which could solve that problem if it had legs or some sort of stand that would hold it at a somewhat upward aiming attitude.
So today I decided to remove the control head and see what I could rig up. The photos below show the result. Built from thin plywood left over from my RC plane building hobby it holds the control head at an angle and allows room for connecting the control head cable. I haven't tried it "in the wild" but I'm hoping it will work OK. It does add to the bulk of the rig but you can't have everything! Now for a nice day to try it out. 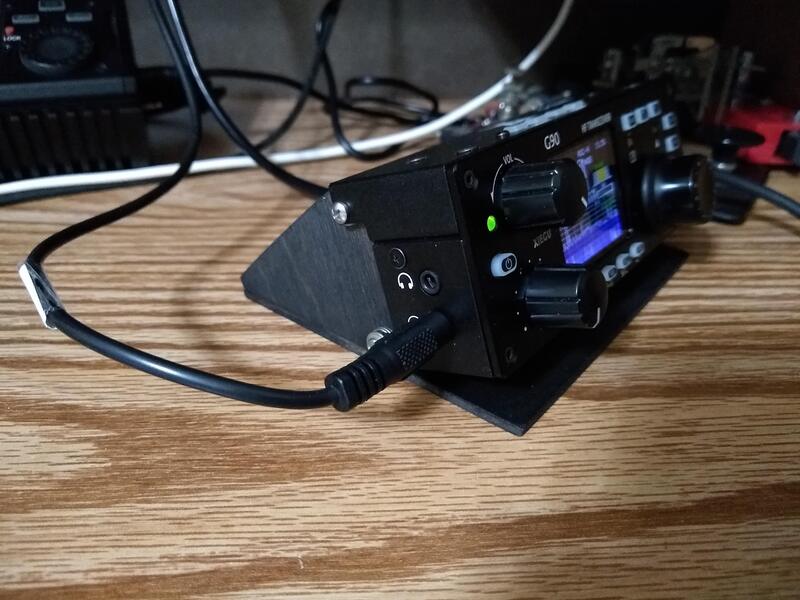 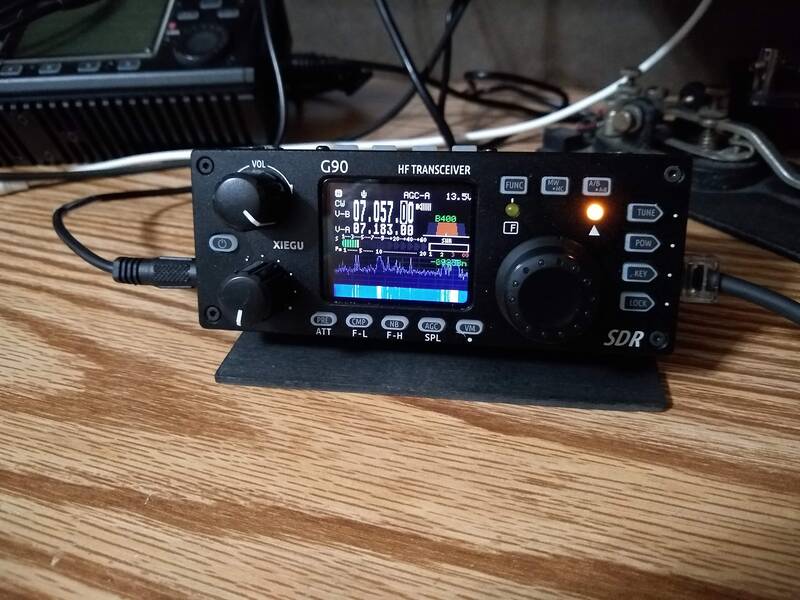 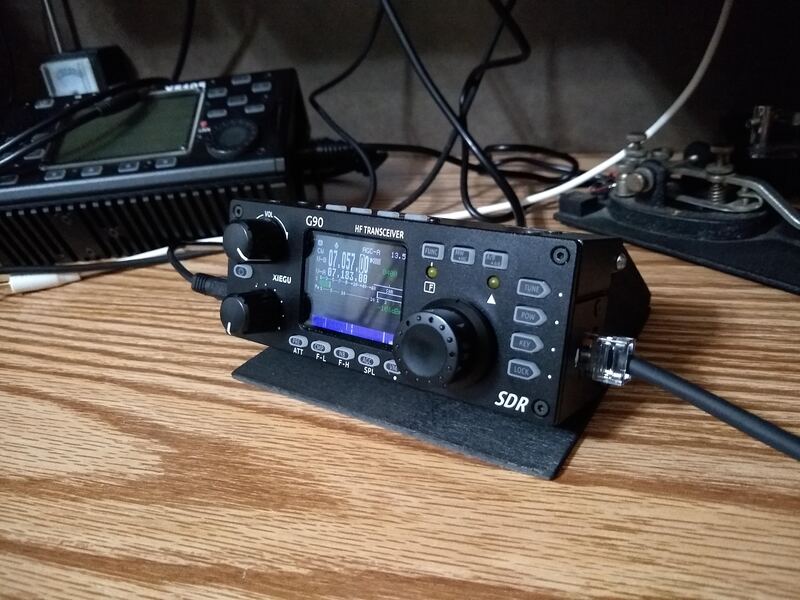 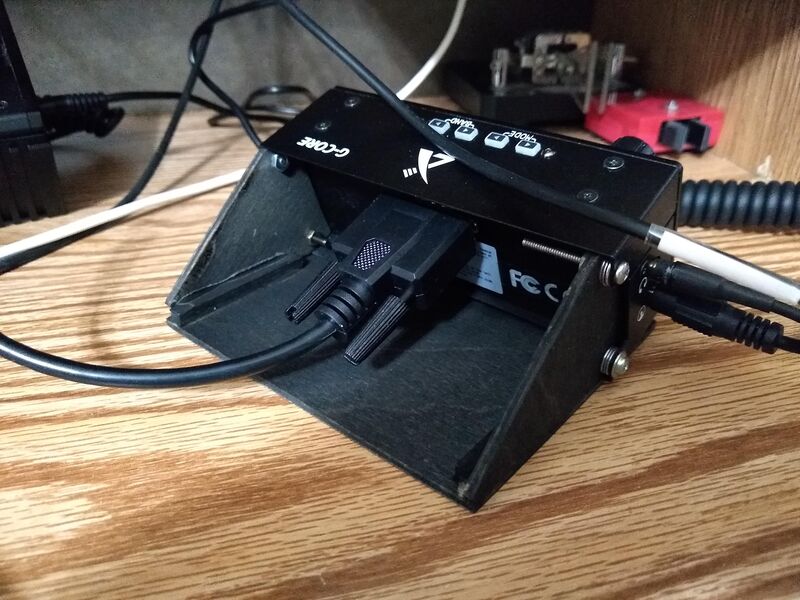 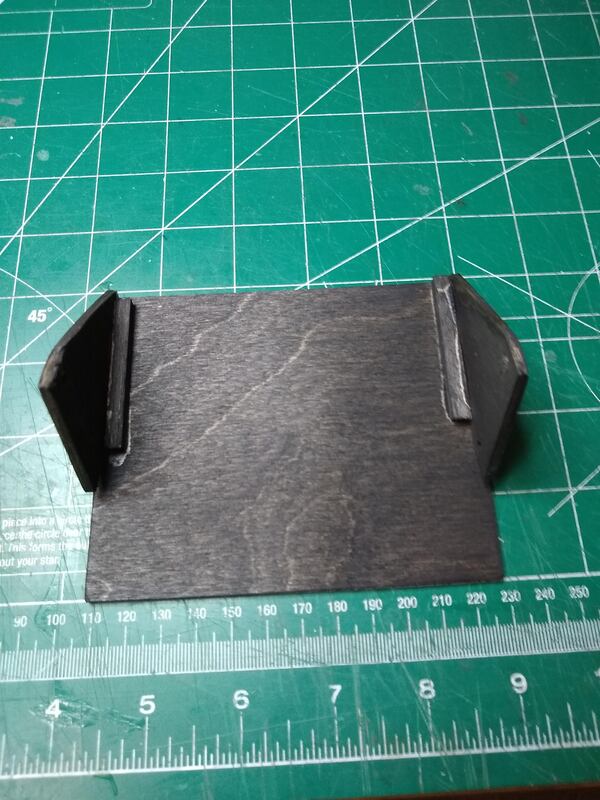 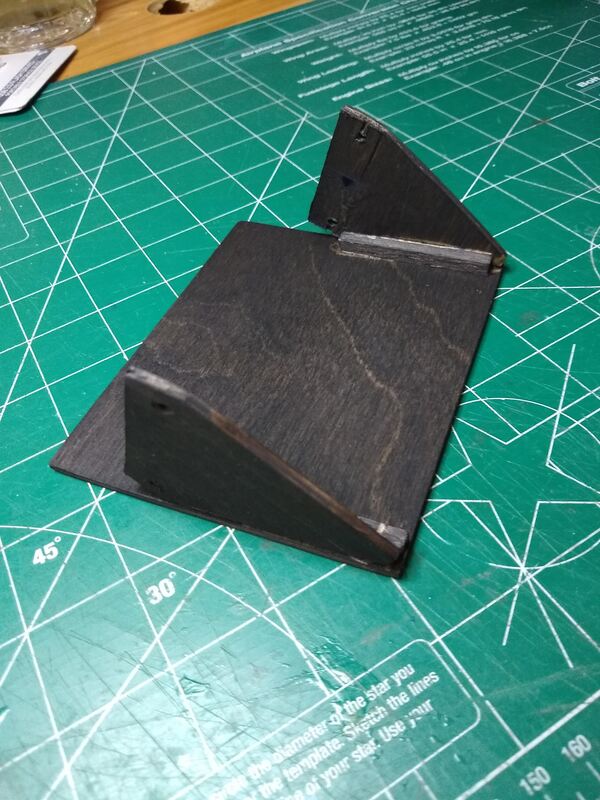 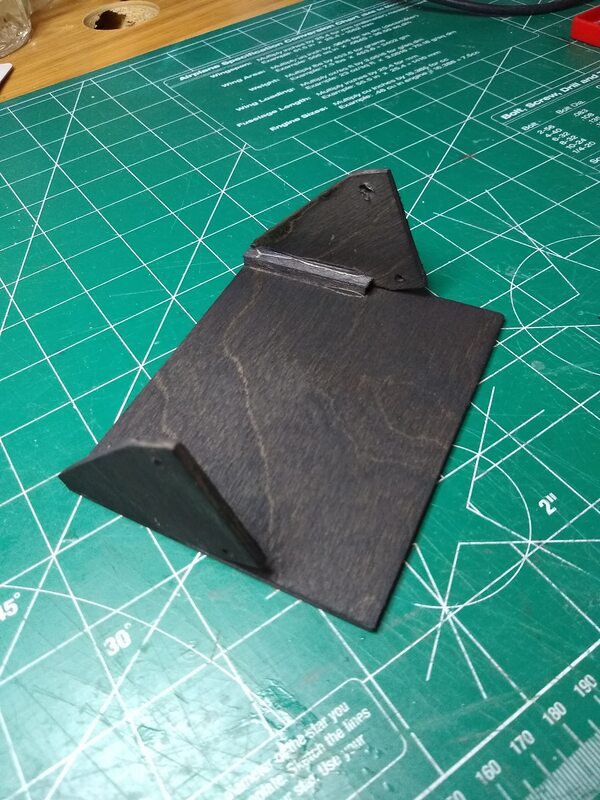 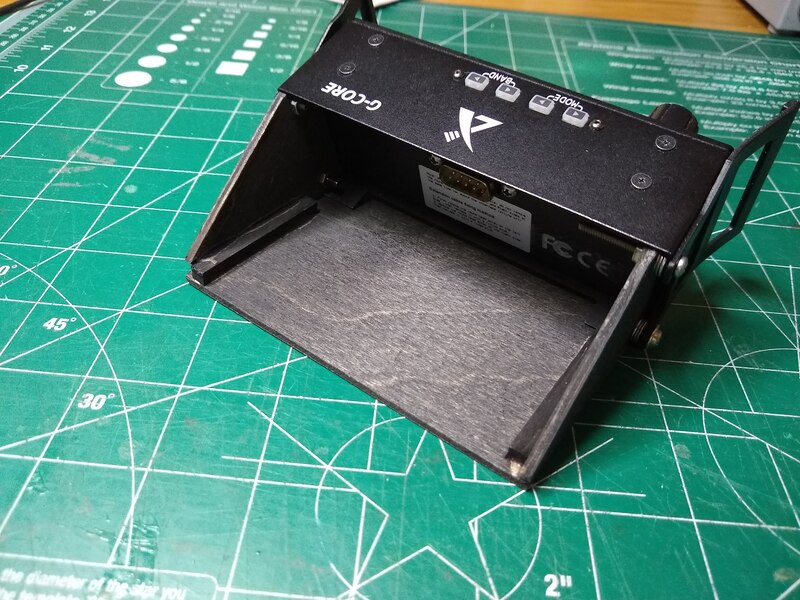 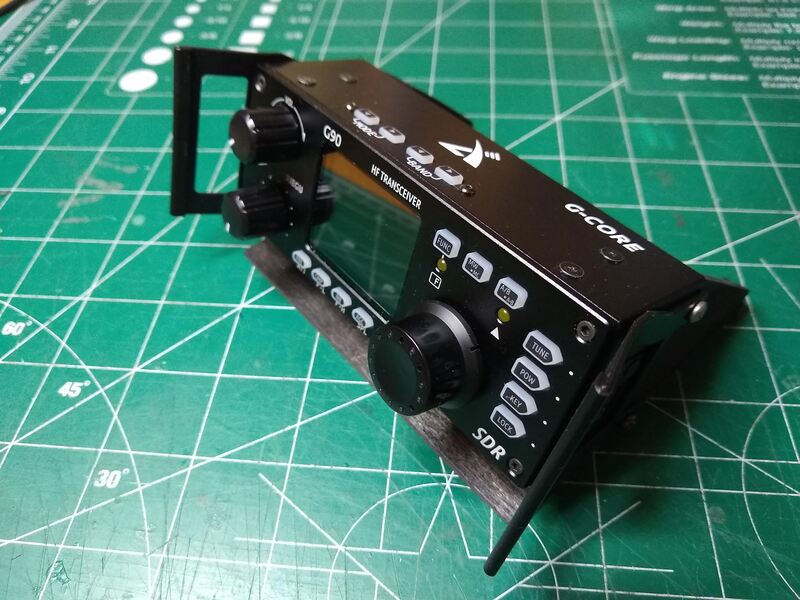 A Back Yard Portable Outing! 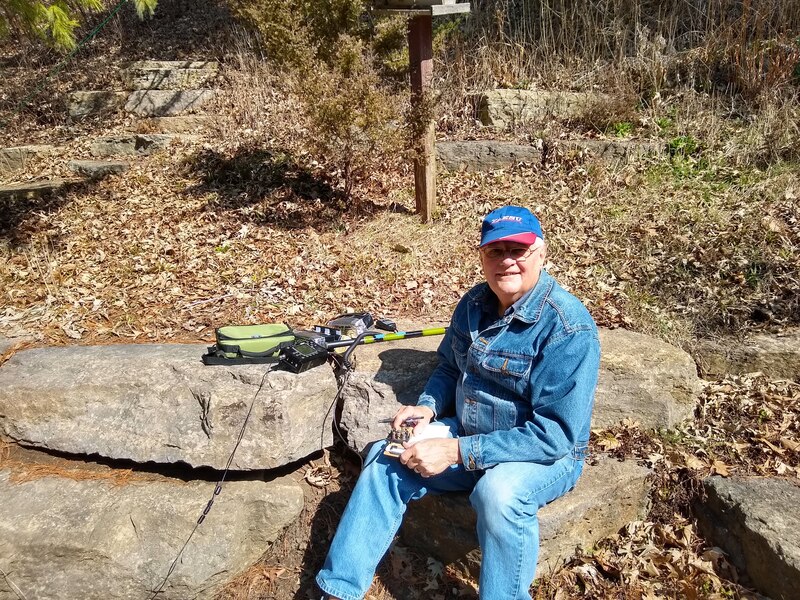 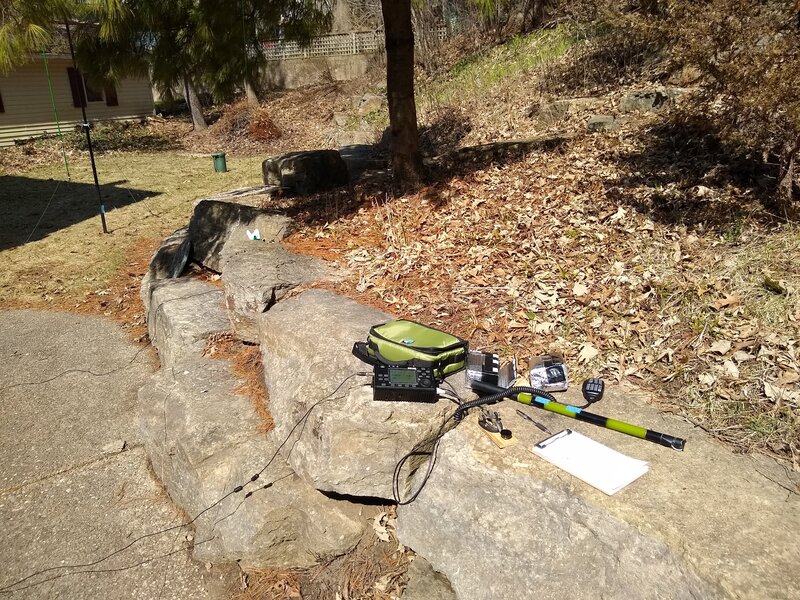 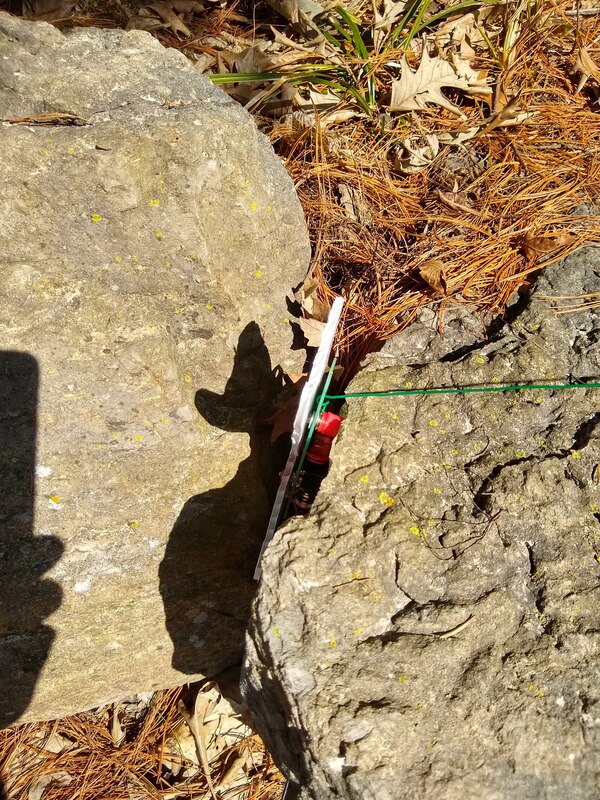 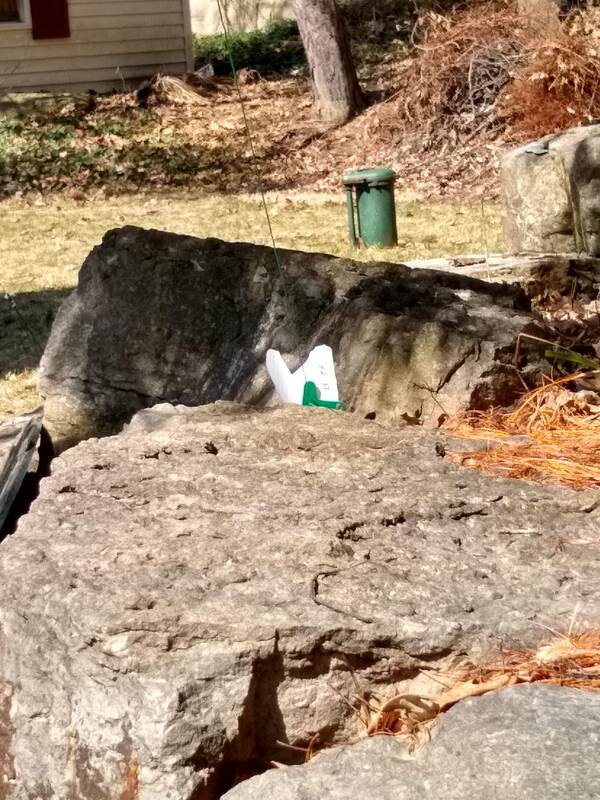 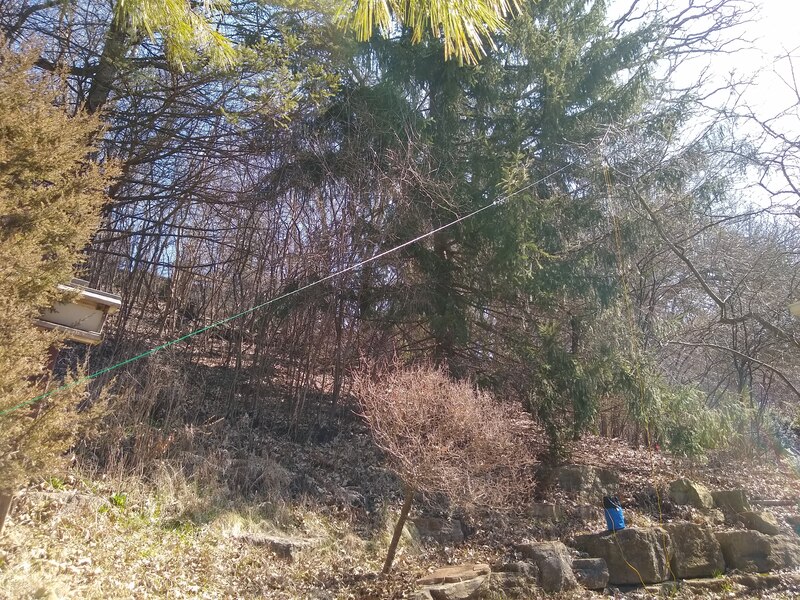 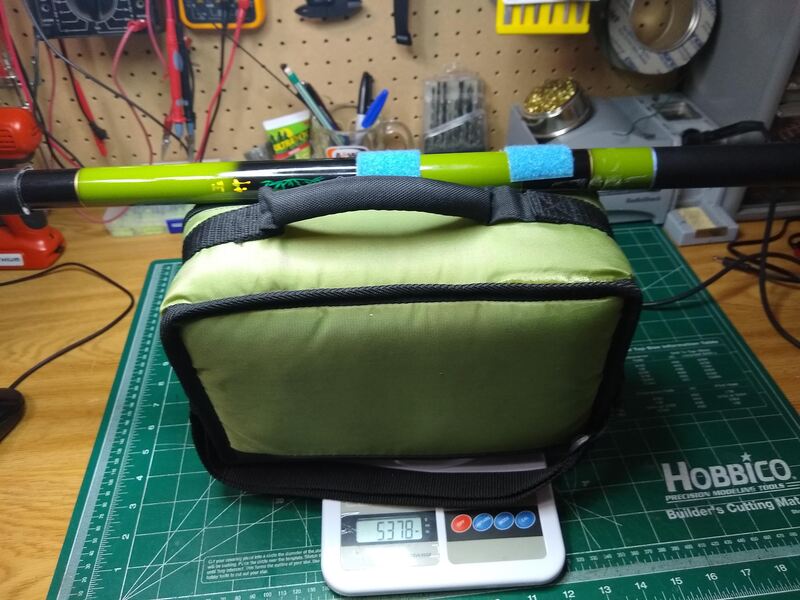 2020-03-25 I've been itching to set up outside after being "trapped" by winter for a while. Yes, I've been playing with antennas off and on throughout the winter but its different when your rig is inside! There is less magic or mystique or something than when you take the whole kit and caboodle out back. But I'm not very adventurous and so doing that when it is below freezing is not fun! I did do it for Winter Field Day, which was fun, but that was different! Today the temperature rose to near 60, so this was the day.
My plan was to go to a nearby state park and do a POTA activation. But after dreaming about that all night it seemed less desirable this morning. So I convinced myself that the smart thing was to take the kit to the back yard and set it up just as I would at a park. I had my bag with the xiegu x5105, key, cables and mic. I also had a note pad to keep a log and a couple pens. The kit included my 29' end fed antenna based on the QRPGuys 9:1 unun, some 1/8th inch bunge cords and cord locks and one of my collapsible fiberglass fishing poles with guy ropes and tent pegs. Finally I had a 25 foot piece of RG-174 coax with BNCs on both ends to connect the antenna and radio. When I left the house I purposed to NOT come back in to get anything. But I broke my vow and came back in for my bag containing a throw line and weight. That is now on my checklist!
There is a tree behind the house that is in just the right place so I tossed the throw line over a branch and tied the end of the antenna to a temporary loop I made in the line. I let the weight hang down to provide the tension for the antenna. After surveying the situation, a simple way to attach the wire winder/balun came to me. So I simply wedged it in a gap between a couple of the huge rocks that line the back of our yard. Now all that was left was to connect the coax, turn on the radio and have a go.
Forty meters was live with strong signals. Twenty meters wasn't far behind. And almost immediately a station in Louisiana began calling CQ SKCC. He was 599+ so I answered his call. He came right back and we had a very nice ten minute QSO. 599 both ways, he running 500 watts to a quad and I, 5 watts to my 29ft sloping wire.
After we finished I flipped over to 20 meters Another 599 station was calling CQ SKCC so I answered him. He didn't hear me though I called many times. Confusing. I want back to 40 meters. There, was a guy from Texas calling CQ SKCC so I answered him. Our 599 QSO was shorter but absolutely solid again. But once again I couldn't raise anyone on 20 meters. And then signals began to fade and disappear.
After a while I gave up, packed up and came inside. I had been out there for a couple hours and had about all the vitamin D I could handle for our first warm day of Spring! My conclusion is that it works! And as usual, propagation is everything, particularly with 5 watts and a short antenna. And it is fun. Kind of sorry I didn't just go do that POTA activation! 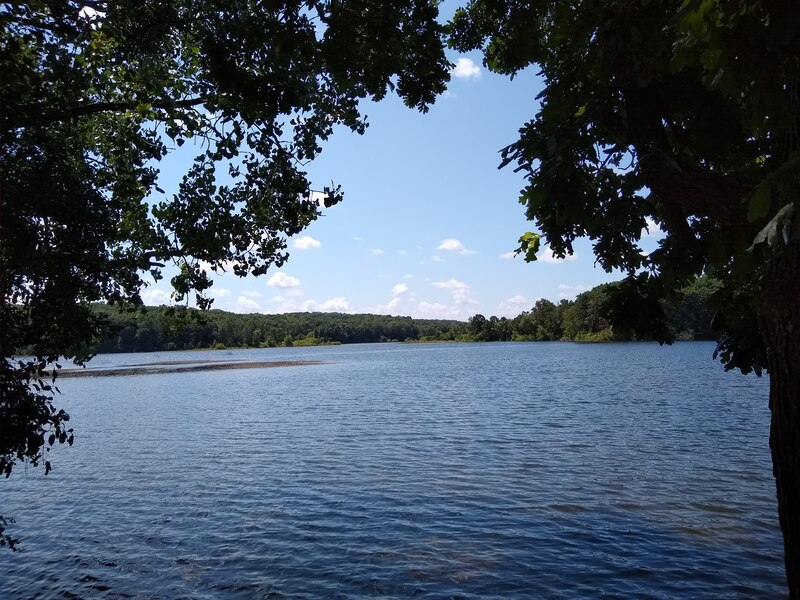 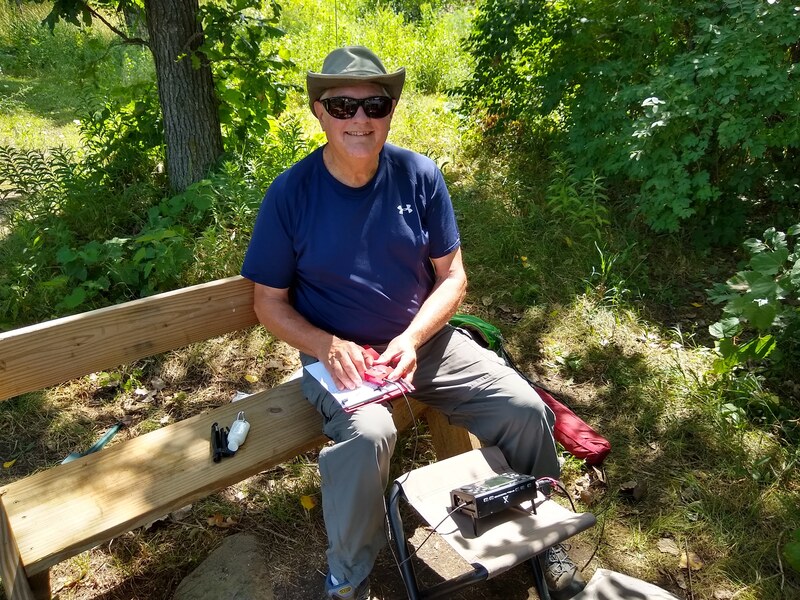 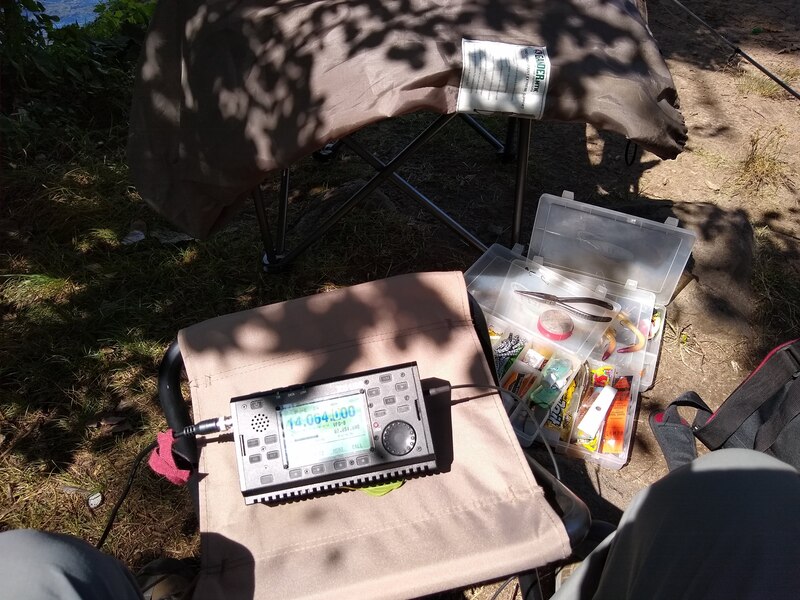