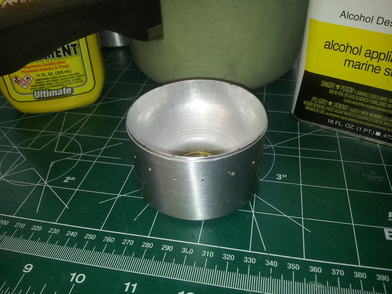 My little drink bottle pressure alcohol stove.
I ran across this interesting looking little home made alcohol stove on You Tube. It weighs just a hair over 1-1/2 ounces. I made it from an aluminum drink bottle I found at Love Inc., a local Salvation Army or Goodwill type store for 50 cents. The idea came from the YouTube video above.

It only took about an hour to make it using techniques similar to those shown on the video. I thought it would be fun to test it out and here is my data on it. I did three tests using two different fuels, Denatured Alcohol and a product called "Performance Octane Treatment" by SMB International that I found at our local Dollar Tree.

​Below are my test results: 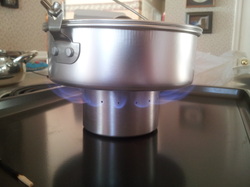 Alcohol backpacking stove made from an aluminum drinking bottle.
All three tests were run using one ounce of fuel. The starting pan and water temperatures were about the same though I didn't actually measure them. Those factors would have a big impact on the results. The time to flame is how long it took for the "jets" around the side to light after I lit the initial puddle of fuel in the center. I actually had to light the jets, or at least I wasn't willing to wait for them to self-light. I observed that they would light a few seconds after the puddle of fuel in the center of the stove started boiling.

It looks to me like an ounce of fuel is a bit small for practical use, maybe an ounce and a half would be more practical. I used a rather heavy kitchen type aluminum pan in the first two tests which may have may have increased the time to boil. The third test used a much lighter weight container and only 1-1-2 cups of water. I was unable to boil the water with the first SMB fuel test. The water temperature when the flames stopped was 208 degrees so I almost made it! I'm thinking the pan was considerably colder with that first test than the others. This limited data is not conclusive other than to prove that it does work. One thing I noticed is that the SMB fuel generates a much worse smell than the alcohol!

Whatever else you might think of this stove, you have to admit it is cute! If I made another one I'd focus more on craftsmanship but I doubt I will.

3/17/15 I bought a yellow bottle of HEET gas line treatment today and tried it out. I couldn't tell much difference in heat output from that and the SMB stuff. Someone on YouTube said in the tests they ran SMB was significantly lower output than HEET. I didn't observe that myself. I couldn't get an ounce of either one to boil two cups of water. It came close but the fire burned out at 8 and one half minutes. There were small bubbles in the water but no rolling boil.

One observation is that the circumference of the flame is quite large. You need a five inch pan to really capture the heat. A more convenient sized pot is about 4 inches which allows the flames to lick up the sides quite a bit. I may play around with some other ideas to make a stove with a smaller flame circle. Otherwise I love the little stove. Another observation is that both the SMD stuff and HEET give off an "unpleasant smell" and leave behind a sort of slimy residue which denatured alcohol does not do.

5/17/15  One problem with this cute little stove is that it can only hold about 2 ounces of alcohol which is enough to boil water if it is out of the wind. But if the stove and pot are in any wind it runs out of fuel before it boils the water! I haven't built one yet, but the Arizona Can Stove looks like a potential improved design which not only can hold more fuel but the flames appear to be directed toward the pot or pan sitting on top instead of kind of outward so might be more efficient. I plan to give it a try.