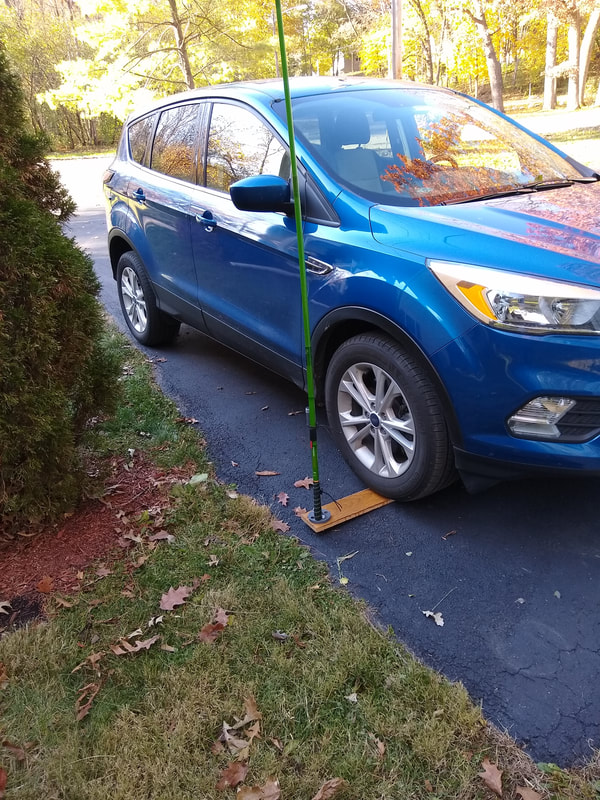 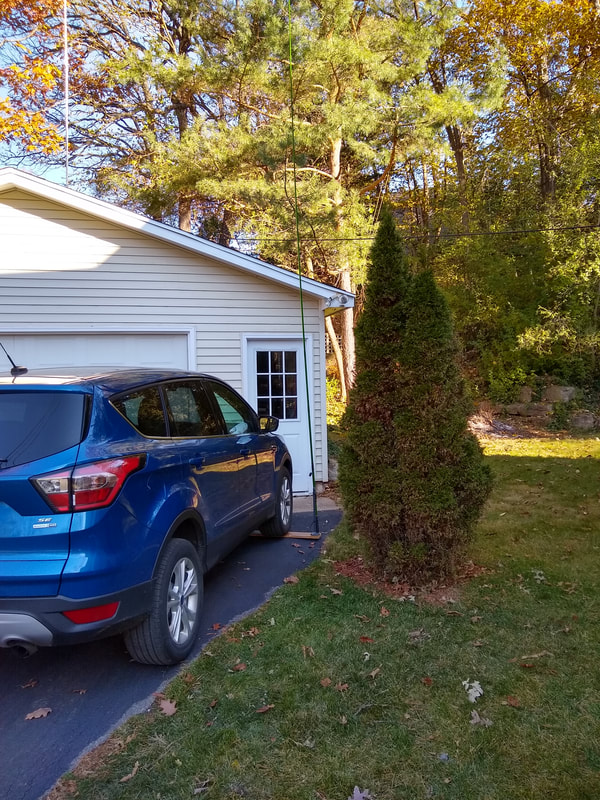 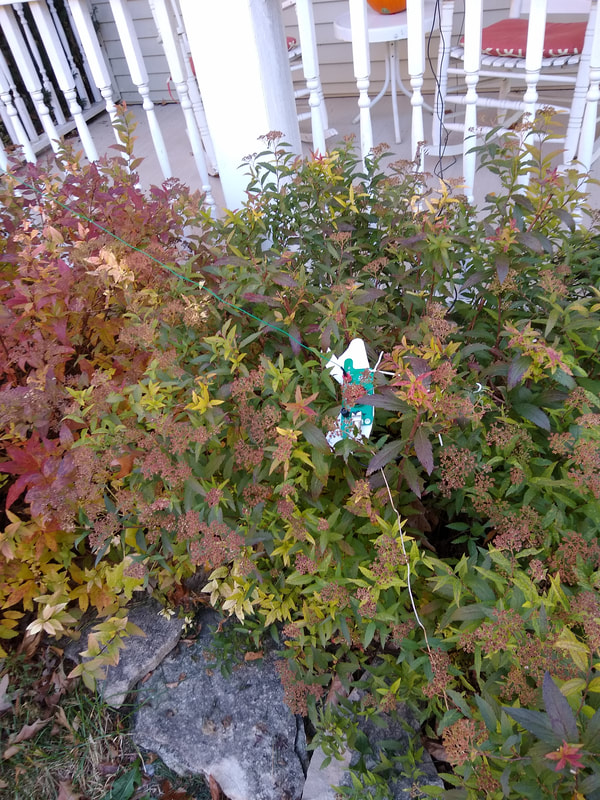 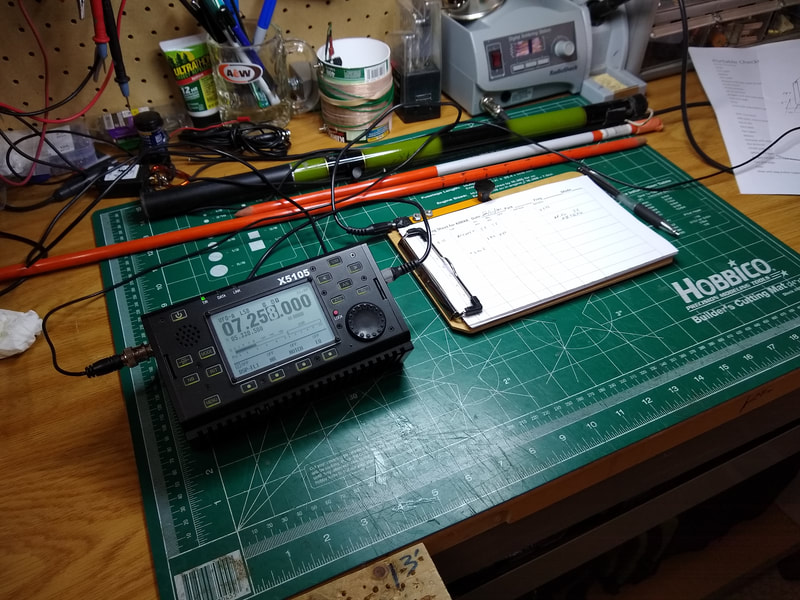 2020-10-31 A couple days ago I made a drive-on support for my portable antennas so when the ground is frozen I can still deploy an antenna for a POTA activation or whatever. Yesterday morning, even though it was below freezing, I backed the car out of the garage and drove the front wheel onto the 1x6. Then I tied my 20 ft push-up Carbon Fiber Ultralight Telescopic Fishing Rod to it using two pieces of 1/8 bungee cord and a couple cord locks. Then I attached the tip of my QRPGuys 29ft end fed wire to it and pushed it up. I tossed the transformer/winder into the shrubs at the front of our house and laid out the 17' counterpoise. Then I ran a 25ft piece of RG-174 coax from the transformer through a nearby window to my Xiegu X5105 and fired it up. right away I heard N4MTE on 7.278 calling CQ POTA from K-4172 Jackson on Patoka Lake State Recreation Area, 348 miles away and answered him. To my surprise he came back immediately giving me a 55. He was 55 in here! I then went on to have one more contact on 40 meters and two others on 20 meters. All were sideband except with KB5QFU on 20m in Saginaw Texas, 840 miles south. I was happy with the antenna, the drive-on mount and my x5105! I'm always amazed what you can do with a simple antenna.
2020-06-16 Yesterday, after reading a Facebook post about a guy who had a fun backyard outing using a 35' end fed with 9:1 unun and 17' counterpoise, I decided to add the approximate six feet needed to my 29' end fed and give it a try. So, (sorry no pictures) I did that and took it to my back yard. I was able to get some light string over a fairly good branch in a tree and strung it up from there to the back of a patio chair. I used a 25' RG-58 coax to the radio. Bands still don't seem very good here but I managed four QSOs between 20 and 40 meters, one being SSB. I was using my G90 at 20w. The relatively short end fed is sure an easy antenna to put up and seems to work reasonably well.
2020-03-19 In addition to putting up my 4 band trap dipole antenna, I also put up the 29' version of this antenna again. I have to say that I am quite pleased with it. It is truly a multi-band antenna with a tuner. Since both my primary radios have internal tuners it is very easy to use. And when I compare it with my two EFHW and trap dipoles I'm always surprised how well it compares. Same or better on some signals and a little worse on others. But that is always the case with different antennas which are mounted differently and have different radiation characteristics and patterns. I'm thinking it should always be in a portable bag as it is easy to hang and dependable. 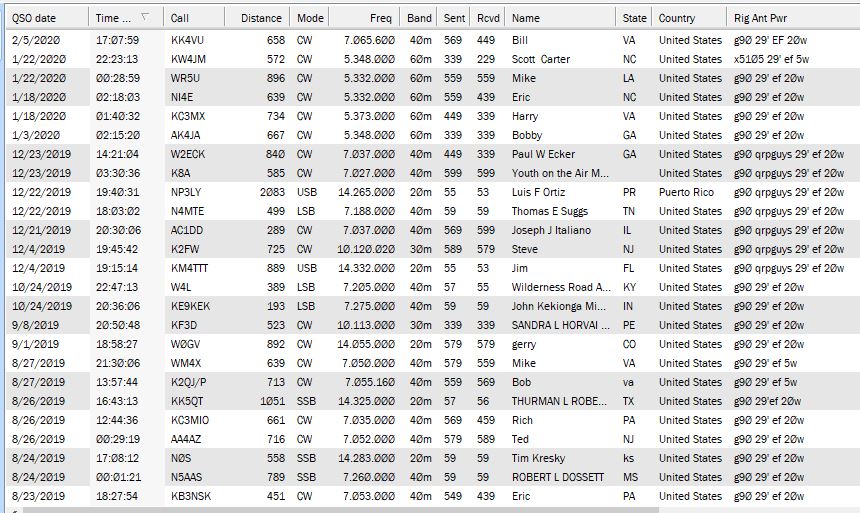 2020-01-23 I alternate between loving and being disappointed in the 29' end fed antenna using the QRPGuys 9:1 UNUN. Tonight I love it! Having just completed entering the 60 meter frequencies into my xiegu X5105 memories, I flipped through them to make sure they were all correct. When I hit 5.348 I heard this faint CW CQ. So listened. I flipped the antenna switch in my shack to the 29' wire as I knew it would tune up on 60 meters and the signal was a bit stronger. But before I could get to him a pileup started. So I waited. When the other guys finished and KW4JM called CQ SOTA I jumped in. He had considerable difficulty getting my call but finally did. We managed the essentials and signed.
Five Watts. 29 foot sloper just a few feet outside my window with six inches of snow on the ground. 572 miles. Poor band conditions. He atop a mountain in North Carolina! Oh, and I was running off the internal battery of the X5105 so I was "almost portable!" That's real ham radio! Thanks Scott for sticking with me! Oh, by the way, that's five 60 meter QSOs with the 29' wire this month. All but this one were 20 watts on my G90. All were CW. I've had 61 QSOs with the 29 footer on 60, 40, 30, 20 and 15 meters using both SSB and CW since first starting to play with it nine months ago. Thirty seven of those were at 5 watts. Reminds me that the reason I first got interested in that antenna was for possible portable QRP use.
It's a good antenna! 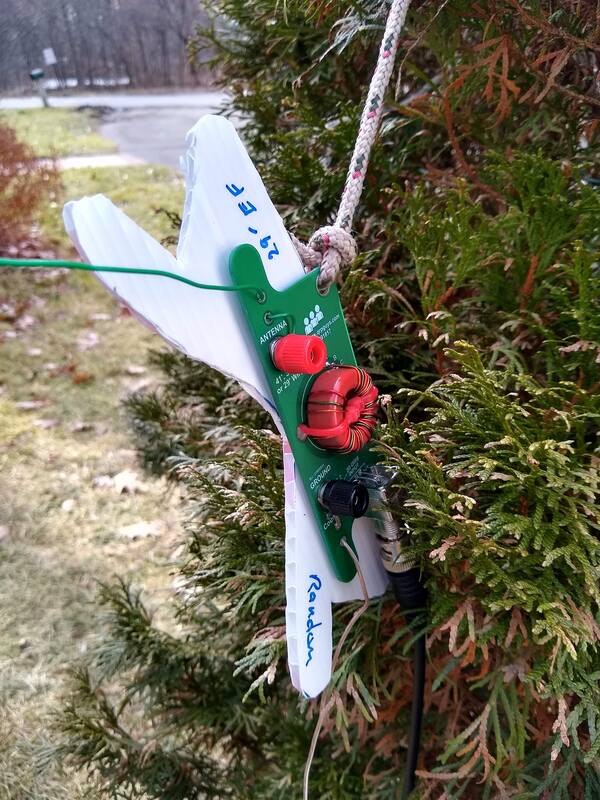 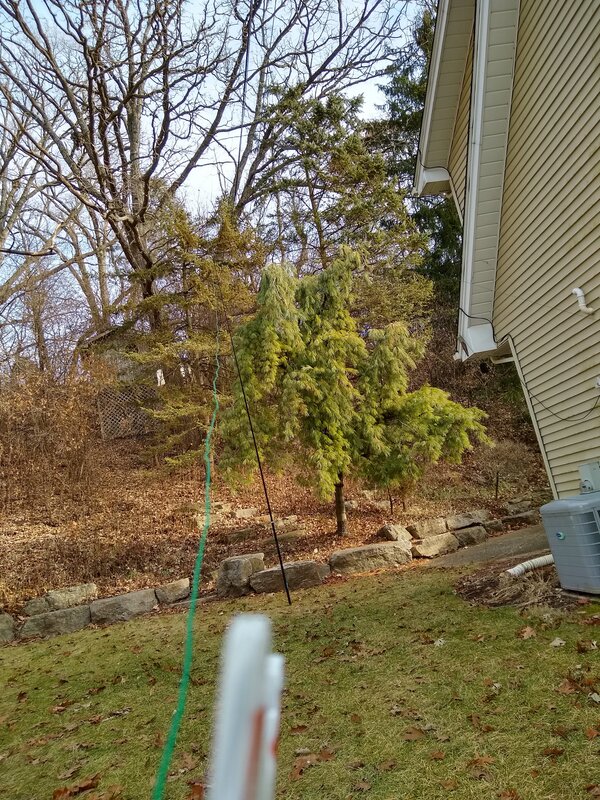 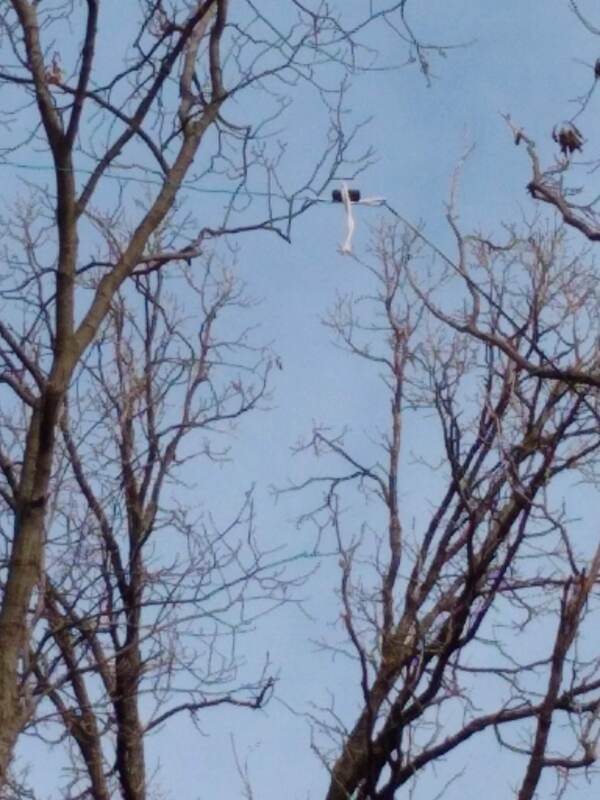 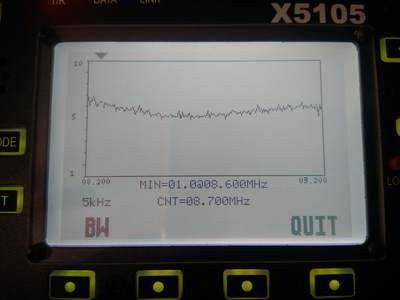 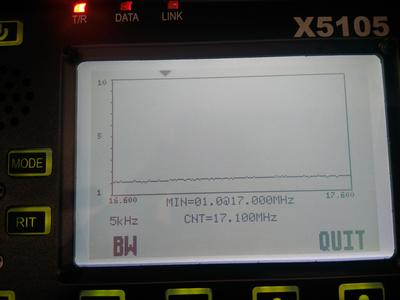 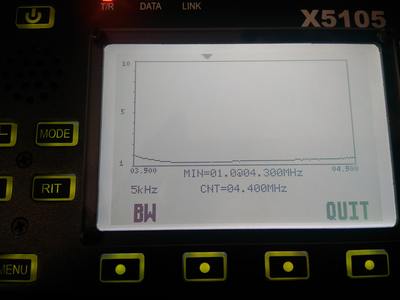 2018-10-19  I know this is not the greatest antenna in the world, but I also know it is a reasonable one! I had two more QSOs this afternoon and evening, on 40 meters. One was with a station in Texas, 950 miles with a 599 report, and the other with one in Louisanna, 850 miles and a 449 report. Both with my five watt x5105. The Texas one was one of those strange openings as he was absolutely booming in here for a little bit then faded way down. With Louisianan it was normal band conditions as that signal was a 549 in here. Every time I give this antenna a chance I'm pleased. it is so easy to put up and just works.
2018-10-18 Today I put up this 35 foot antenna again. This time with the 20 ft. Wonderpole since I already had it out there for some contacts with my trap 20/40 Inverted vee and my link 20/30/40 meter inverted vee. I had had good success with these two the past couple days so wanted to compare it over the next days. I was immediately impressed once again how well it hears and how easily the x5105 tunes it. I used about six feet of coax from the unun to the radio rather than a 25 ft piece of RG174.
Within just a short time I had a QSO with W3ZRW in Maryland, 645 miles east. He responded to my CQ on 30 meters. He was running 10 watts with an Icom IC703 and I forgot what antenna he was using. I was running 5 watts with my x5105 and this antenna. He gave me a 559 and he was 449 in here. I don't know the directional characteristics of the antenna. For convenience it is strung south to north with the feed end to the south. The Counterpoise, a 35 foot piece of wire runs along the ground, parallel and beneath the antenna.
2018-09-18 Well, I decided to mount the QRPGuys unun onto a Sotabeams wire winder. To make the whole thing a bit more compact I cut off the half of the unun board that serves as a handle. Turned out pretty nice If I do have to say so myself.
Currently the antenna is permanently attached but the counterpoise has a banana plug. That makes deploying both simpler than having both attached. Simply unwind and lay out the counterpoise on the ground with the banana plug near the feed end. Then attach the end of the antenna to the support mast and unwind it back toward the feed end. Once that is done and tied off, simply plug in the counterpoise, attach the coax and you're ready to go.
When taking it down I lower the support and wind the antenna first and then wind the counterpoise over that. The length of white shock cord serves to tie the winder/balun to a tent stake, tree branch or whatever. It also can be wound around the winder once the antenna and counterpoise are wound onto it to keep everything secure. 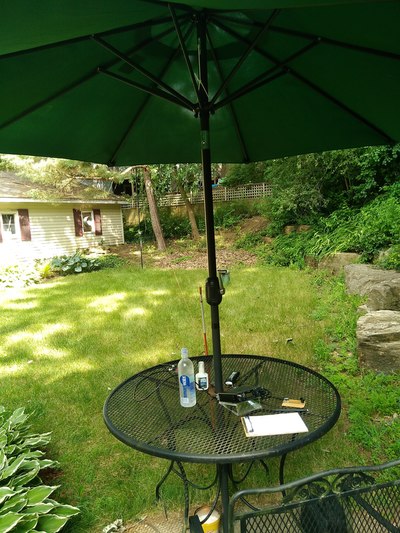 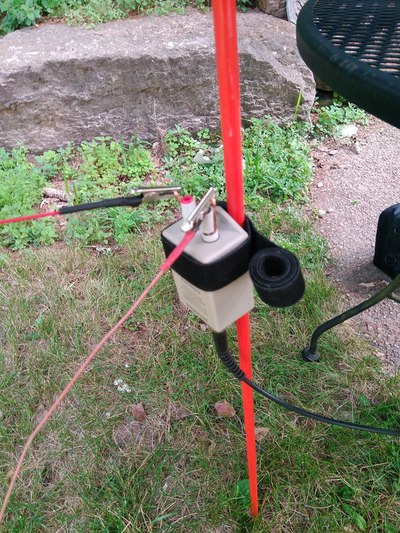 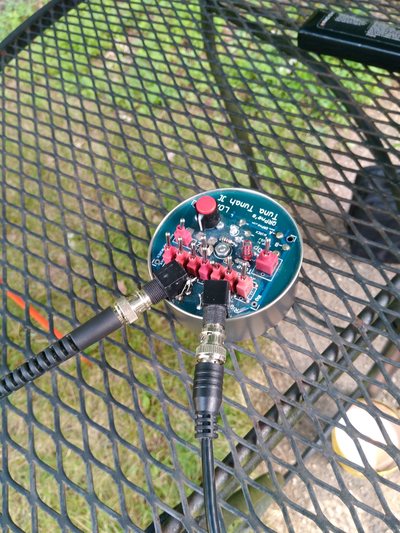 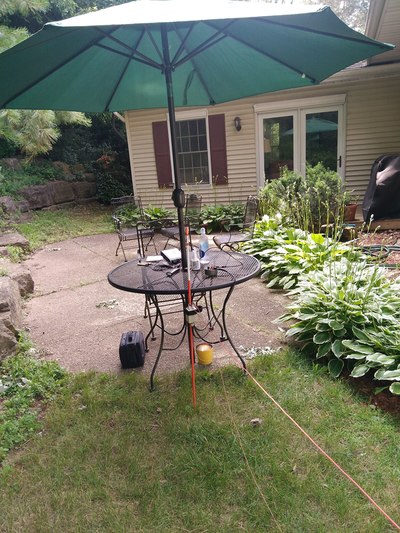 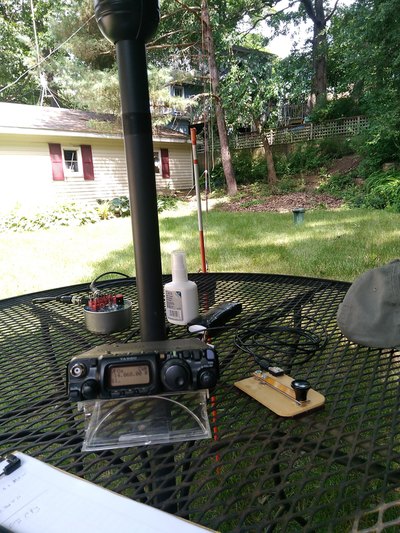 2018-07-03 Yesterday I played with the 51 ft wire antenna using my newly re-fabricated 4:1 balun/connector described on that page. It was difficult to string up the 51 ft wire requiring quite a bit of fiddling with ropes, etc. I did get it up after a fashion but it was way too low. That got me thinking about how much easier the shorter 35 ft wire would be to set  up. The 51 ft one actually had a disconnect I had installed at 35 feet so I disconnected that and using a pull-up rope I already have in a nearby pine tree for playing with antennas, hoisted it into the air. I connected the Wonderpole mounted connector/balun to the Tuna Tunah ii  with a 3 ft BNC coax. Lastly, I connected my FT817nd to the tuner using a six foot BNC coax. I laid a 15 ft counterpoise out on the ground beneath the antenna. 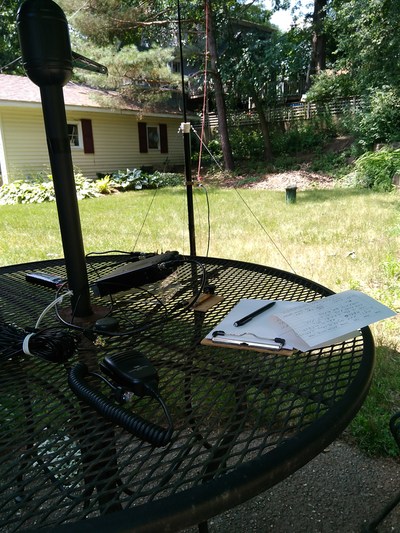 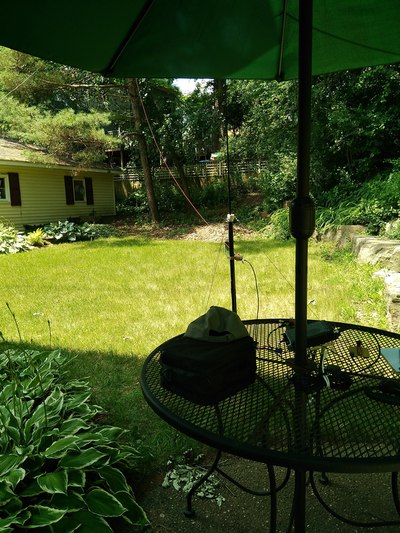 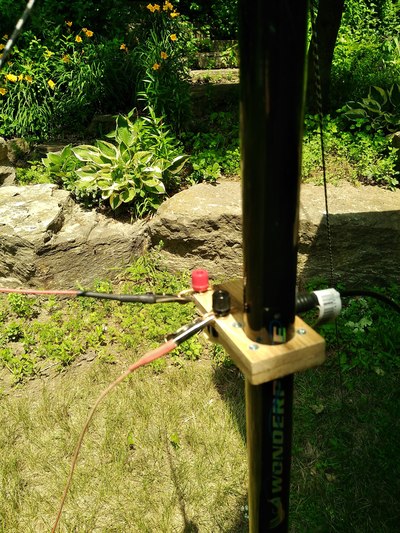 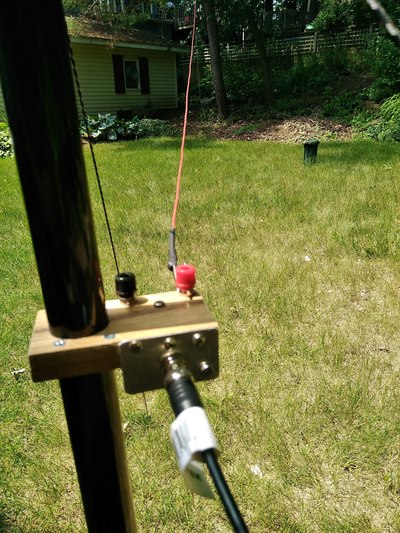 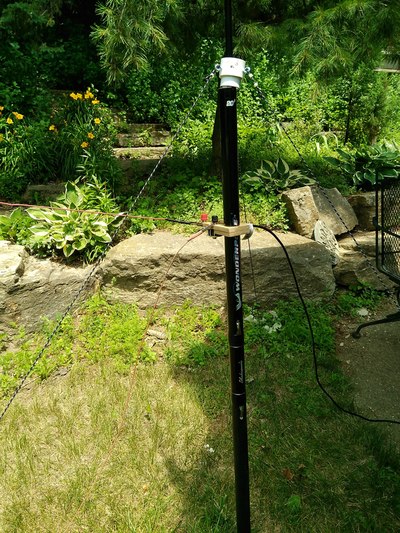 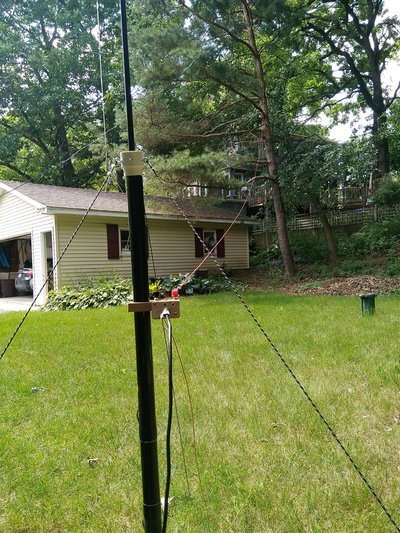 It tuned up nicely on 40, 30 and 20 meters. There was very little CW activity on any of those bands when I got it all connected at about 1:00pm. The few week signals I heard apparently didn't hear me. Then about 1:40 I heard N3QW in Maryland calling CQ SKCC at 14.05mhz. His signal was 589, so I called him. He responded immediately, giving me a 549 describing my signal as "solid but weak." I took it! The photos above show the backyard setup.
I just had two more QSO's all CW, one on 20 and one on 40 meters. The 20 meter one was at 3:10 pm CDT with one of K2B, one of the 13 colony special event stations. He was booming in here, a true 599. He gave me a 599 also but I noticed everyone was 599 with him! The 40 meter one was at 3:20pm CDT with KZ3T in NC. he gave me a 449 and he was 539 in here. I don't think this is "the ideal" antenna, but given its short length and ease of setup it seems like a clearly functional portable option.
Now I'm getting the hair-brained idea of actually mounting the Tuna Tunah ii  directly to the terminal/balun. It seems that would reduce losses in the coax from the balun to the tuner and present the coax from the transceiver with near 50 ohms. Tuning might be interesting unless everything within arms reach!
2015-05-10 After a recent QSO using the 51 foot antenna with W1SFR i looked up his web page where he describes an antenna he sells that uses a 35 ft end fed wire. So I decided to give a 35 ft wire a try. I strung it up exactly like the 51 footer and left the same counterpoise connected. Everything else remained the same, that is the Tuna Tunah ii matchbox and FT-817nd. I was able to get a near perfect match on 80, 40, 30 and 20. Propagation is terrible today so not sure I'll get any useful on-air observations today but at least it can be matched up to the radio with the Tuna Tunah ii.
5/20/15  Just had my first QSO with the 35 foot wire with N8HLH, Midcars control operator in Marquette, MI about 550 miles north. Conditions are not good at all as a magnetic storm that hit yesterday is just fizzling out. But he managed to hear me. Will keep testing before making any judgments on how well this antenna performs.
5/21/15  It's 5pm here and in SE Wisconsin and I just completed a solid QSO with VE9GU up in New Brunswick, Canada, about 1150 miles north east. He was a 58 and gave me a 55. All that with the 35ft wire tied to my Tuna Tunah ii and driven at a whopping 5 watts by my FT-817! At least I know the 35 foot wire does work!

Later in the evening still using the 35 foot wire I tried to answer a very strong call from 8 land on 40 meters CW but he apparently didn't here me. I also called CQ a number of times on both 40 and 30 meters with no response. Not sure if that indicates anything useful but it is the way it was! I'll keep experimenting.