2020-09-11 Contemplating taking my DS-1 along with my xiegu x5105 on the plane to visit my ham brother-in-law in Spokane next week I got to thinking about the ten inch aluminum spike that I use to mount it. I don't know if TSA will like it or not. It clearly is not a weapon but at the same time, with one end sharpened it could cause some discomfort should it be used as a weapon. So the idea of a tiny camera tripod came to me. And would you believe it? Our local thrift store had one! for a couple dollars. 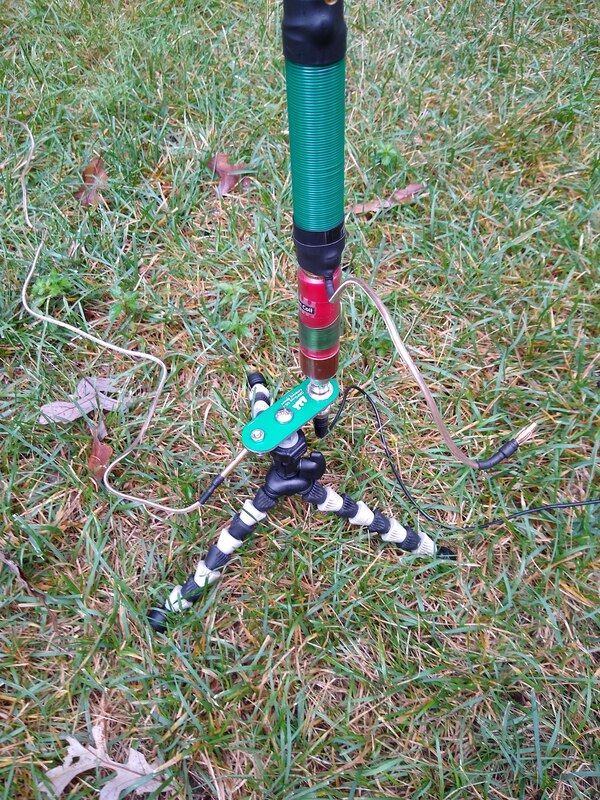 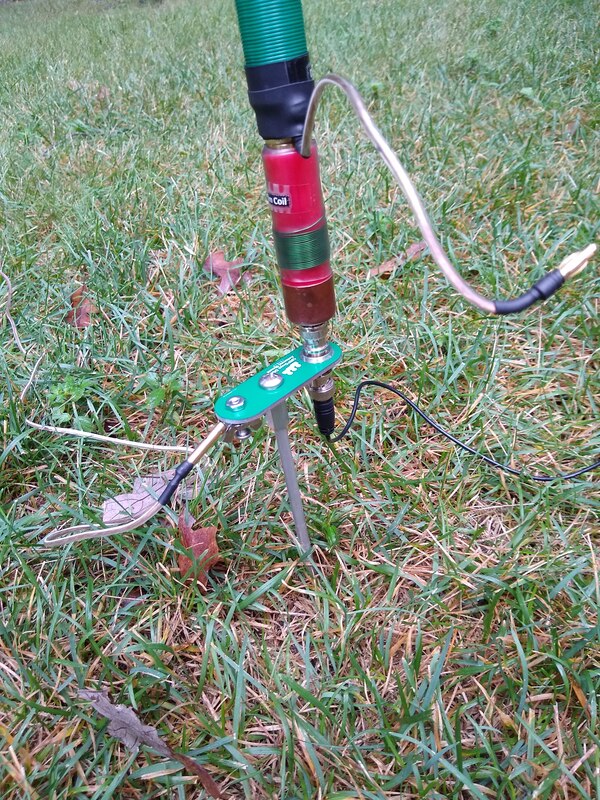 Then I began wondering how mounting the antenna on that compared with on the spike would impact the antenna performance. So I checked the resonant frequency with the two mounting methods using my nanoVNA. The result? On both 40m and 20 meters the resonant frequency on the tripod is a little higher on the tripod. Not much but measurable, 14.18 vs. 14.10mhz; 7.204 vs. 7.260mhz. On 20 meters it is unimportant as the antenna is broad enough that it makes no substantive difference. On 40 meters it might require adjustment of the vertical if one was changing frequency from one end of the band to the other. Of course a tuner would deal with it also. My conclusion is that either mounting approach is acceptable.
Just to prove that it works, at 20 watts I called CQ SKCC on 7.054 and after the second call VE3QEE (425 miles)answered me and we had a successful exchange albeit I had to repeat my SKCC number for him. He was 539 in here so I was surprised we were successful! Under any circumstances a short antenna like this is not the best antenna but for what it is, it does OK. And sometimes something easy and small like this is just what the doctor ordered.
2020-08-24 Since I completed QRPGuys the DS-1 short vertical I've been mulling over making it "band switchable" after a fashion. I had the idea from making that modification to my DIY version of the antenna while awaiting the arrival of the DS-1. My DIY can be be changed from 20, to 30 and for meters by simply selecting a tap point on the 40 meter coil with pigtail attached to the bottom of the 40 meter coil. You sill have to go out to the antenna to do it but you don't have to screw on or off the 40 meter coil.
I didn't want to mess up my beautiful shrink wrap of the lower end of the 40 meter coil which I made myself rather than order theirs, I wasn't sure how to attach the pigtail I ended up attaching it to the bold protruding from the top of the 20 meter coil as shown. And I used a plug-jack pair of Gold Plated Banana connectors rather than an alligator clip and screw eye as I did on my DIY version. Seems to work well 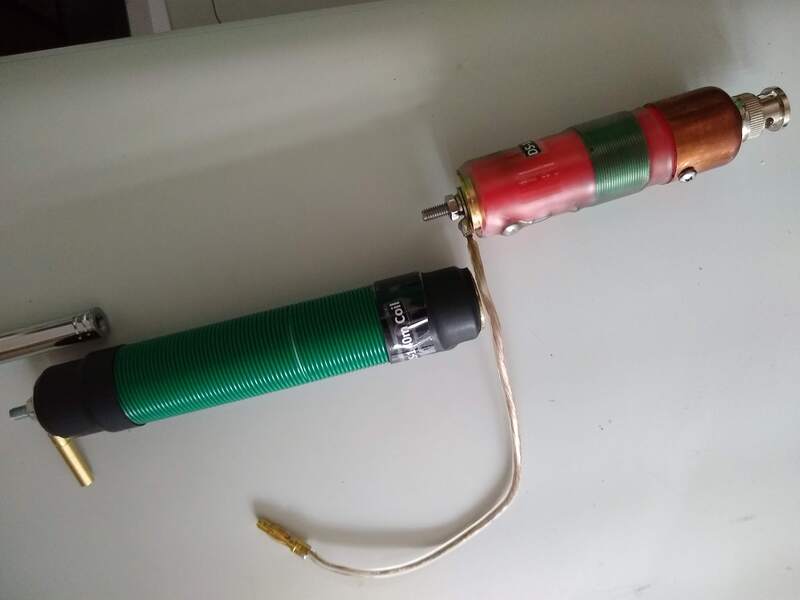 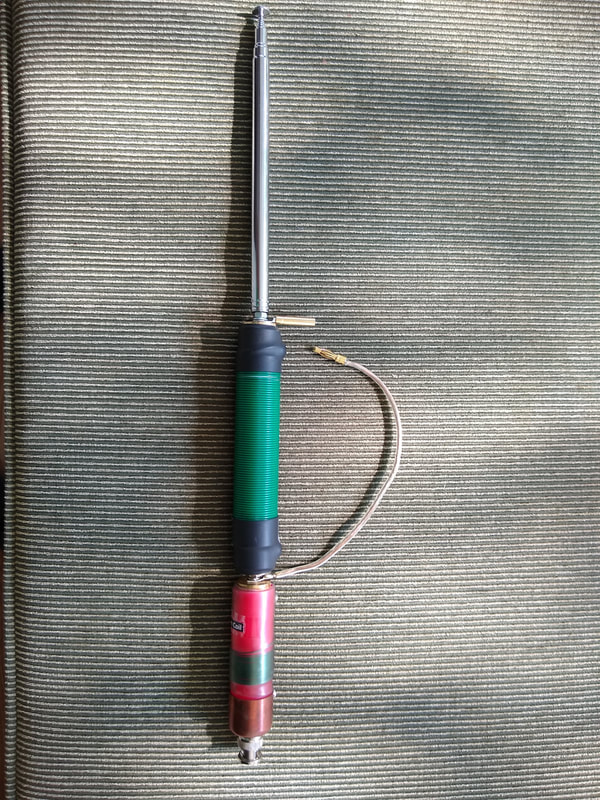 I've used it now for several days and think it is a good modification making the antenna a bit more user-friendly than its original design. Certainly give the mosquitoes less time to find and chew on you when changing bands compared to unscrewing the whip, adding or removing the 40 meter coil and screwing the whip back on!
2020-08-10 This past weekend I took my x5105 with internal battery and QRPGuys DS-1 antenna with me on a trip to Michigan to visit family and meet our newest great granddaughter, just a month old. Spent most of the time with family but did get about a half hour one day and another half hour the next during the SKCC Weekend Sprint (WES) to try it out. With the antenna stuck in the ground and a 25 ft length of RG-174 coax connecting it to the rig I made six CW contacts on 40 meters. Gave 20 meters a try but just couldn't get anyone even though many seemed strong enough. Distances were in the several hundred mile range so nothing exotic. But it was fun and contacts were pretty easy to come by. I came away convinced it is a good portable setup for when size matters. Greater then five watts and an EFHW or even the QRPGuys 3 band vertical would likely yield more results but the very light weight and extreme easy of setup makes this very attractive.
2020-08-05 Had 5 QSOs with the DS-1 last evening on 40 meters CW. I was using my 5 watt x5105. Feedline was 25' of RG-174. Antenna was mounted on a 1/4" aluminum spike about 10" long stuck in the ground. I'm impressed with both the rig and antenna. Great portable package if there is "reasonable" propagation.Planning a Boundary Waters Canoe camping trip in northern Minnesota in 2 weeks. Considering taking this setup plus a QRPGUYS 40-10EFHW antenna.

2020-08-01a This evening the NA CW QWO Party is under way. So I connected the completed DS-1 with my DIY 40 meter coil and gave it a shot. Ended with eight NA contacts! They all heard my first response to their CQ. Several needed me to repeat some information. They don't give signal reports so I don't know that but they all were 559 or better in here. Those eight were in addition to two SKCC contacts I had prior to that. One was in answer to my CQ. This is far from the best antenna in the world, but for it's size and weight (about 14 oz including the 16 ft counterpoise and 25ft RG-174 feedline) it can hold its chin up!
The coil has 86 turns on a six inch PEX form. The good news is, it works! I just had a QSO with W4DHT in Ohio on 7.053Mhz.He gave me a 569 and he was 559 in here. The photos show the antenna set up as it was for that QSO as well as the SWR trace and the package broken down for transport, including the 16ft counterpoise and mounting spike. Clearly it qualifies to be called a "portable" antenna!
This afternoon I had time to set up both antennas about ten feet apart in my yard. I connected both to my antenna switch inside the shack with 25ft of RG-157 coax. Both antennas had 16ft counterpoise wires attached and laid out as near to identically as possible. Both were mounted atop 10 inch aluminum spikes made of 1/4 inch aluminum rod.
As often happens there were few signals on the band but W1AW's code practice was coming through pretty well. Frankly, switching between antennas made no difference. The signal was 569 on both antennas. The other two antennas I have permanently mounted are an MFJ-1984MP EFHW as an inverted vee and a G5RV. The EFHW is strung north-south and the G5RV is strung east-west. The G5RV read 59+ on W1AW while the EFHW read 549. Both were quite a bit quieter than both verticals.
I then tried sending CQ and monitoring the RBN network. At 20 watts RBN heard nothing from either one. Just for comparison I switched to my EFHW and sent again I had 4 spiots with reports from 2-5 dB. I knew the band wasn't "hot" and this verified that. So this test will need to be repeated another day.
2020-07-30 The QRPGuys DS-1 short vertical I ordered a couple weeks ago arrived today. I was impressed with the packaging and the simplicity of the kit you receive! At least that part lived up to my expectations. Having built my own version of it from the construction manual on their website I can appreciate the thought that went into its design and manufacture. It is smaller than I pictured, at least in part based on my DIY one. The whip is only 43 inches long whereas the whip I used is 57 inches. Their coil form is only 3 inches long. mine 4 inches. And with the coil wound with solid 22 AWG wire it only occupies about 3/4 inch on the form, mine 2-1/2 inches. But conceptually is exactly like mine!
It took an hour or so to assemble, part of that was because my 4-40 tap was dull and didn't want to "bite" into either copper of the cap or brass of the plug. But I finally got it to work. When I initially tested it with my nanoVNA the resonant frequency was about 14.6 Mhz. By adding one turn It came down to about 14.050 and provides a less than 1.5:1 SWR across the 20 meter band. 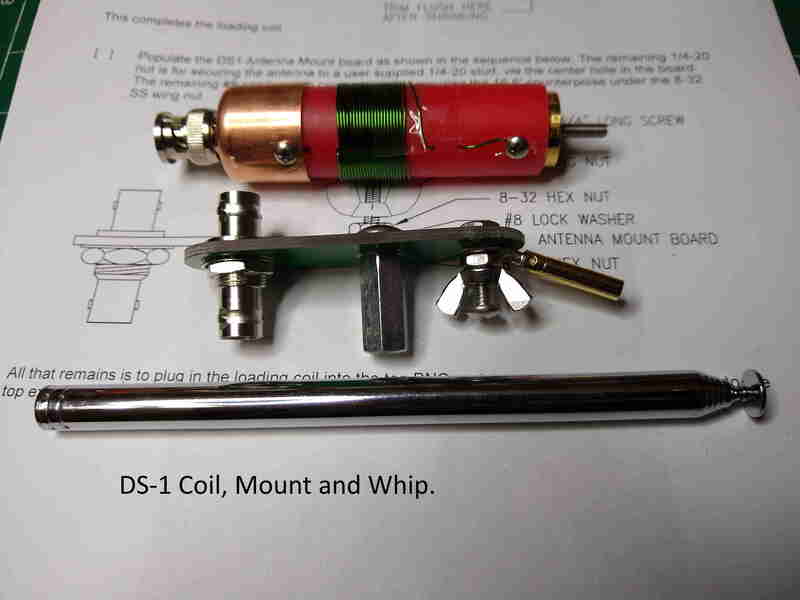 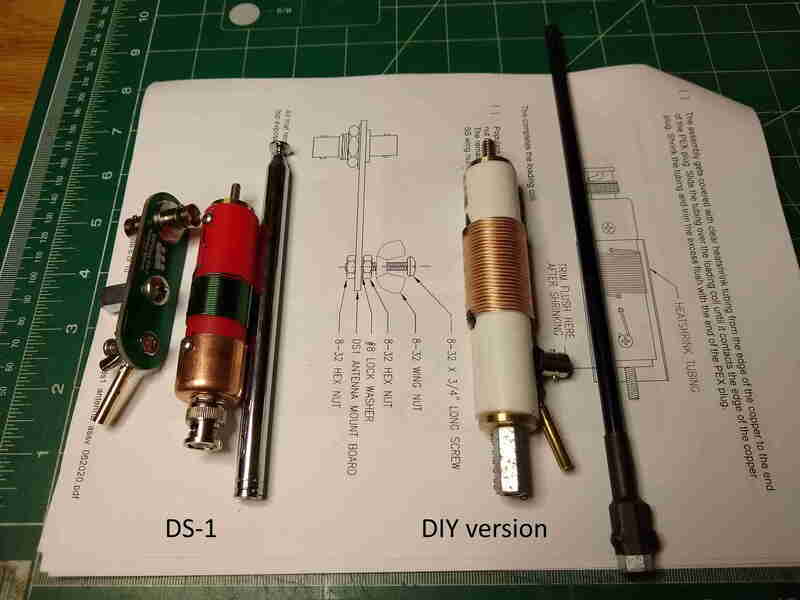 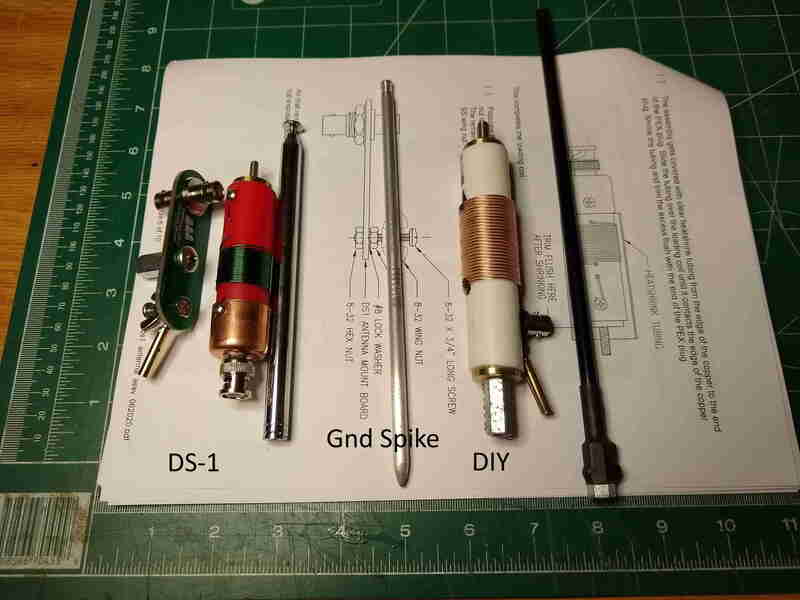 The three photos above show the DS-1 and my DIY version side by side.
It was getting toward dusk when I did my initial checks so I didn't keep careful notes but I noticed that if I mounted it on my camera tripod the resonant frequency was higher than if I use the aluminum spike I made for my DIY version. I used the 16 foot counterpoise I had made up for my DIY version. To do that I did my only construction modification other than the additional turn on the coil. I soldered a gold plated banana plug sized banana connector to the little ground lug they provide so I can simply plug the counterpoise in rather than needing to put it under the wing nut.
Twenty meters was pretty much devoid of signals but I heard one SSB station and at least one digital one so I know it hears a little. Over the next few days I'll work it a little harder and hopefully even log a contact or two. And I want to do some good on-air comparisons between the DS-1 and my DIY version. My initial impressions are positive.