2020-09-13 A little while ago someone asked on Facebook for what practical reasons one might buy a xiegu g90 and 100 watt amp rather than a Yaesu FT-891. Interesting question, one to which there is no definitive answer other than, "I want to!" But that got me thinking about rigs and operating and particularly in the portable context. What are some of the practical or actual issues in making the decisions we make?
I, like most hams, have been thinking about and playing around the edges of portable operating for years. As a high school kid I somehow came up with a dynamo for my 1949 Chevy to provide the plate voltage and "mounted" my Halifcrafters S20R receiver in the car. For an antenna I slipped an old fiberglass fishing rod into some copper braid, and attached it to the bumper mount with a spring! It worked, I guess though very quickly I learned it wasn't, in fact, practical! :-) But ever since I've been doing some version of that, usually concluding, "It isn't practical"
More recently, with smaller radios, lower power requirements, and more disposable cash, I've had more success. Had a Yaesu FT-857d in my car for many years with a Little Tarheel screwdriver antenna. Purchased, scratch or kit-built and "used" a number of QRP rigs and currently have probably have eight rigs, three 100 watt, somewhere in my house! I've owned two generators and countless batteries. and have built and used at least a dozen wire or other antennas -probably that many in the house now. And in the last couple years I've actually done some portable operating in my back yard and elsewhere. I even have three real POTA activation's "in the bank" as of the past few weeks.
At the moment my choice of components for portable operation are:
​If driving to the site and operating close to the car. If walking to the site or for other reason want smaller lower power setup.
I've done two successful POTA activations with this setup as well as using it in the back yard. Can use from within the car if needed or preferably on a picnic table or similar.
2020-07-16 For the past six months or so I've been messing with all sorts of "portable capable" stuff. Most of my efforts have gone into antennas since I have two very capable portable radios: a xiegu x5105 self contained QRP rig and a xiegu G90 nearly self contained 20 watt one. I've used both in the back yard and a few other portable situations. And they serve well. But portable antennas are far more complicated with seemingly no end to the possibilities. The past two weeks I've worked on yet another one, a short (6 ft)  loaded vertical.
I was interested because I saw information about QRPGuys new DS-1 40-10 meter short vertical kit. Looking over the construction manual, I decided to do my own DIY version while I wait for the DS-1 I ordered. Mine is now "finished" and I've had 21 contacts with it at either 20 watts or five watts.
Today I took it and my x5105 to the back yard and set up on our patio table with the antenna stuck in the ground nearby. It wasn't too long before, tuning around, I heard and answered a CQ by WT0S in North Dakota on 14.28mhz, a little over 500 miles northwest. We had a nice ten minute CW QSO. Thanks, Don. 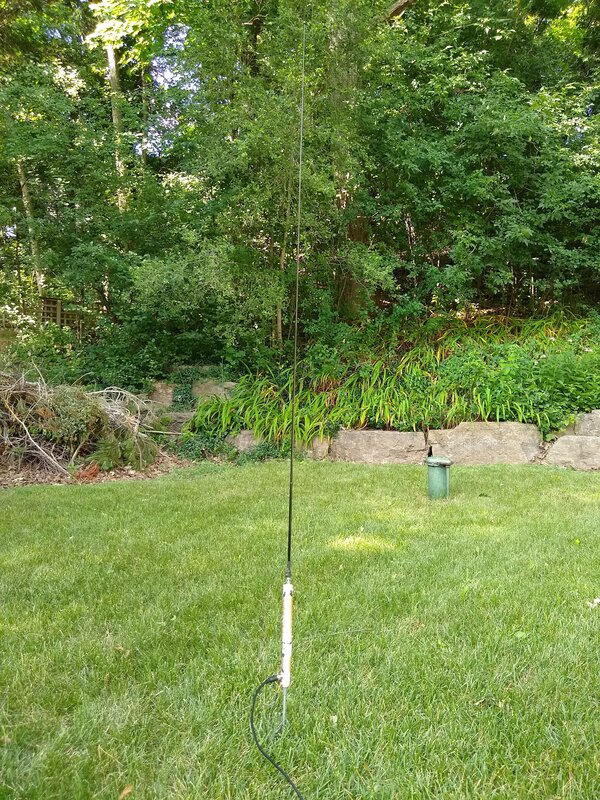 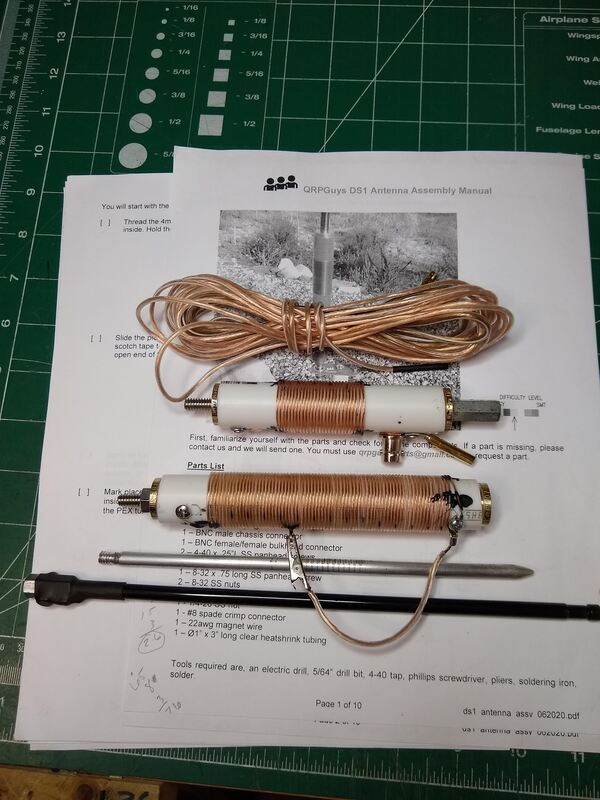 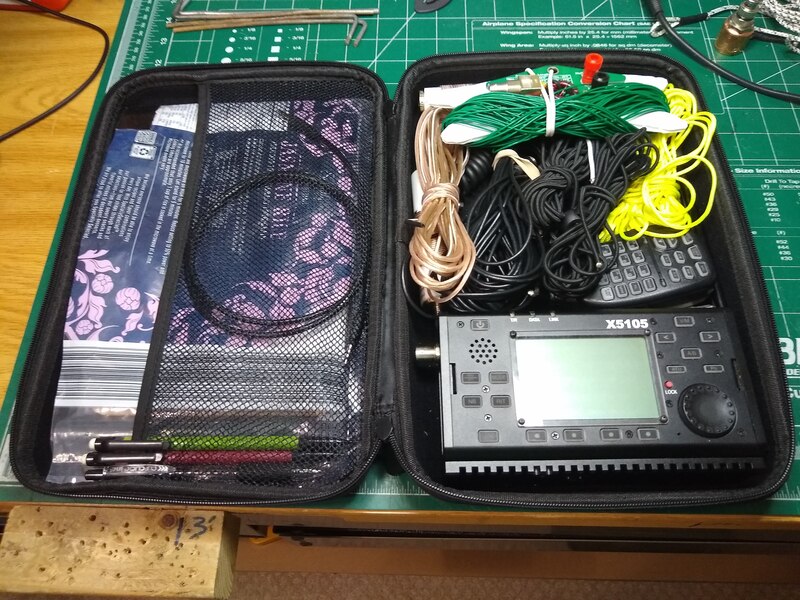 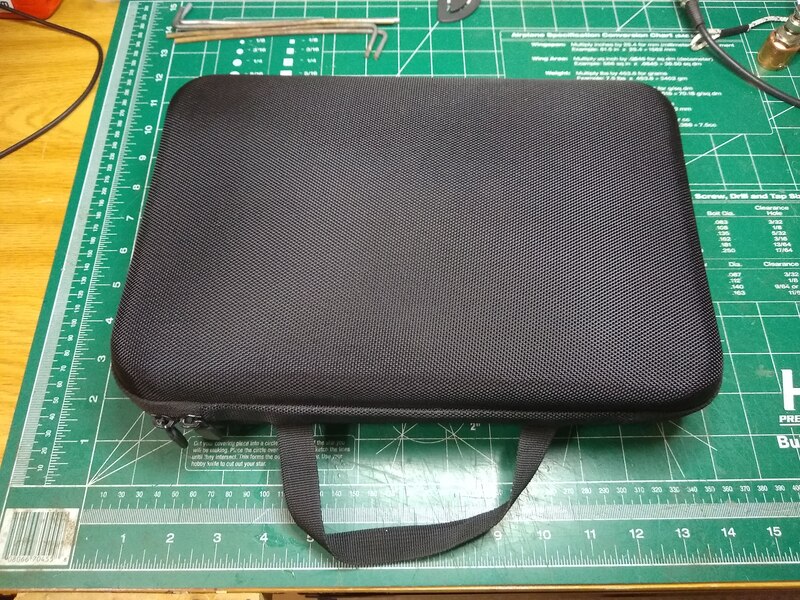 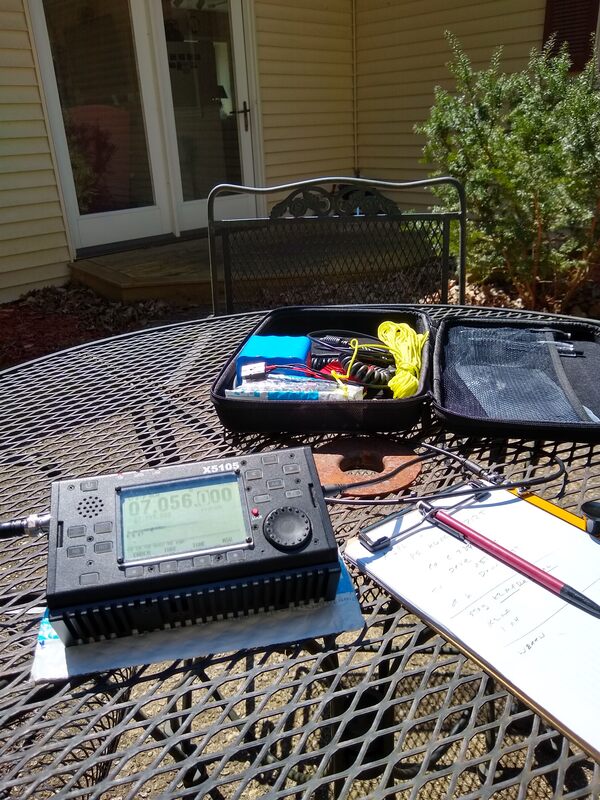