Overview: This antenna is a variation on the 17' vertical I played with months ago. The difference is that one required a tuner to use it on anything other than 20 meters where it was essentially a quarter wavelength long. This one overcomes that by using bottom loading coils. 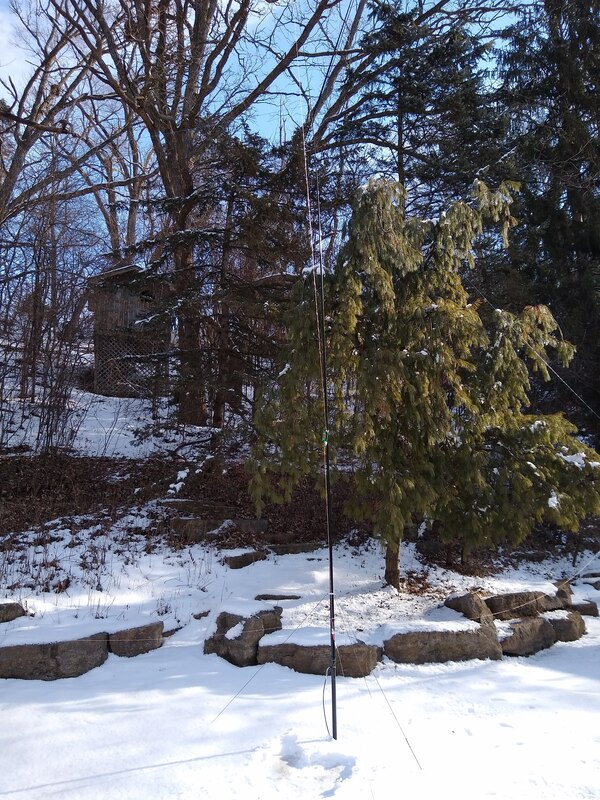 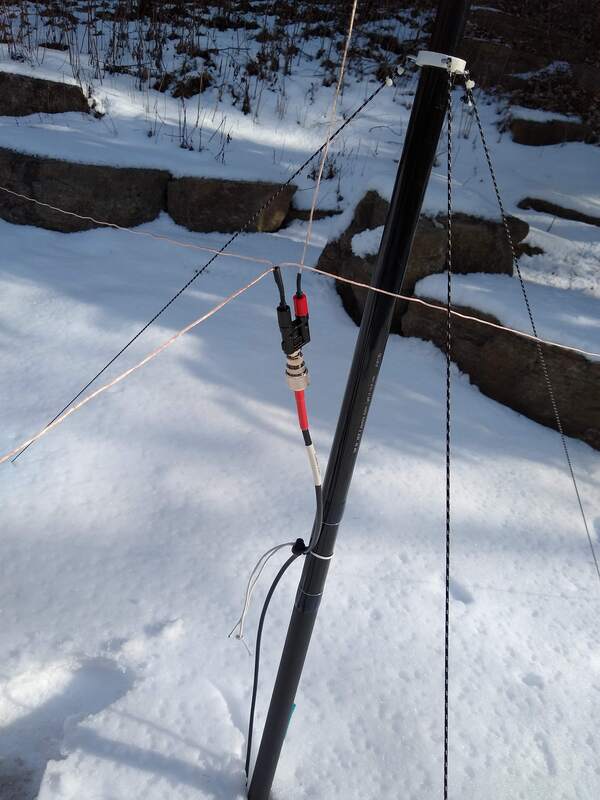 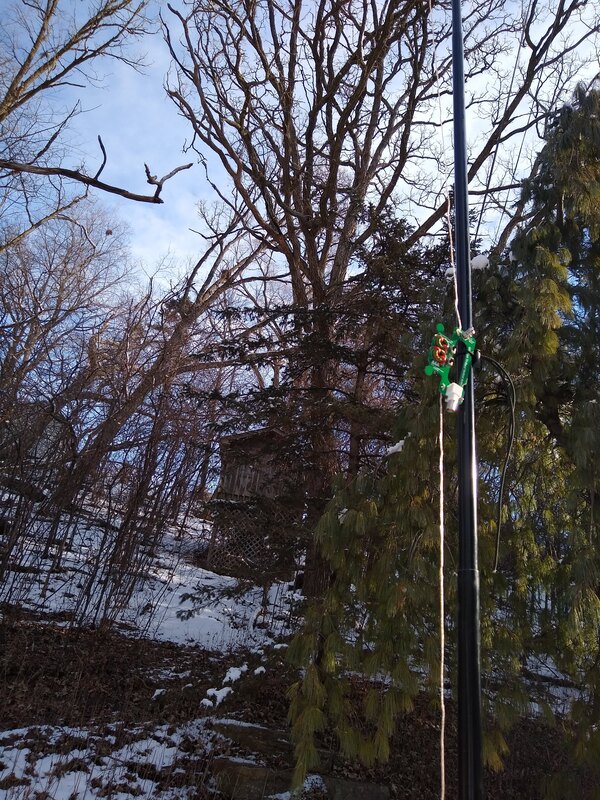 2020-02-11 The above photos and Reverse Beacon Network reports were all done within about half an hour this morning. I failed to copy the date/time on the 40 meter RBN report but it was between the other two bands. Clearly the antenna is radiating. and if there were any stations on any of the bands paying attention they would have heard me.
2020-02-10 OK, now I have one more portable antenna! Today I set up this QRPGuys Tri-Band Vertical as a center loaded vertical, essentially similar to the center loaded Wolf River Coil TIA with long whip and my DIY version of KW4JM's vertical. It has an 11' 1" top section, a 4" coil and 4' 5" bottom section for an overall length or height of 15'10". The two toroidal inductors are only slightly modified from the original plan. L1, the 30 meter coil 4.4uh inductance and L2, 8.5uh. On 20 meters both inductors are bypassed making the antenna a 1/4 wavelength vertical. For 30 meters L1 is switched in series with the top and bottom elements so it resonates on 30 meters. For 40 meters both L1 and L2 are switched in series with the top and bottom elements so that is resonates on 40 meters. I use three radials: 16', 23' and 33' and keep them elevated above ground a foot or so exactly as with the KW4JM antenna. The photos below show the specs and the completed antenna. All the wire is 24 gauge RCA Speaker wire. I had one 40 meter CW contact with it this evening before I had to take it down, which, by the way only took about five minutes! 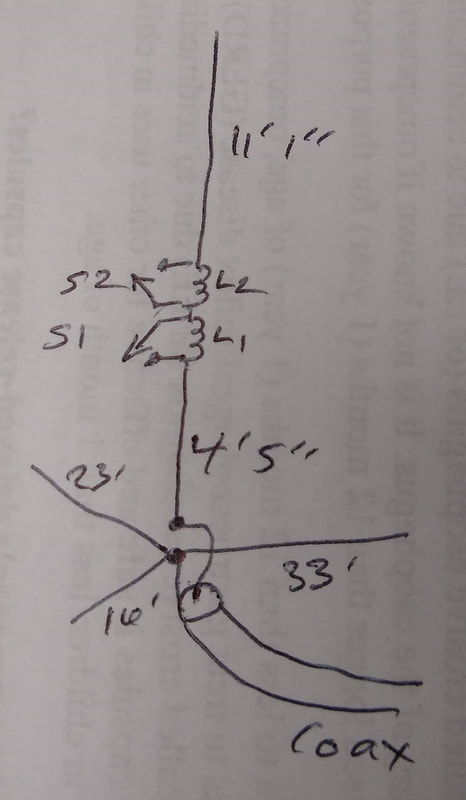 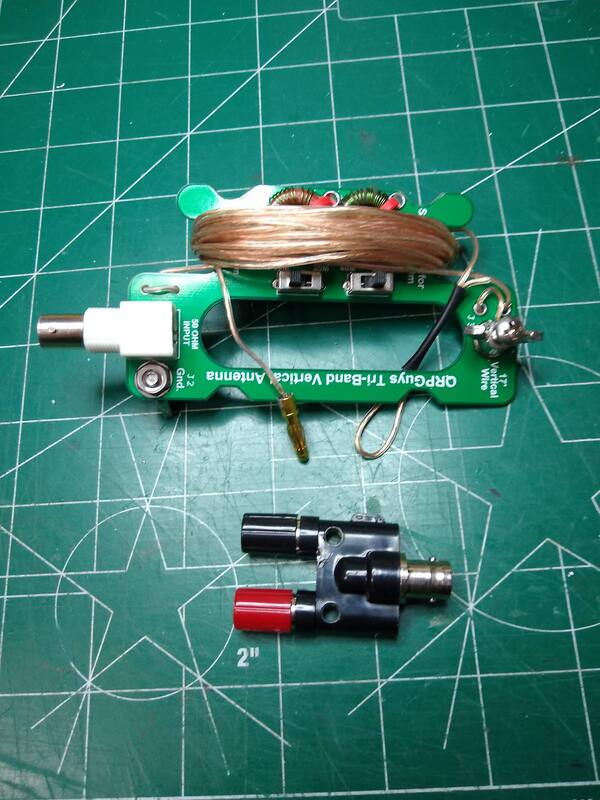 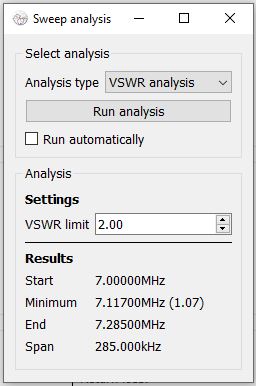 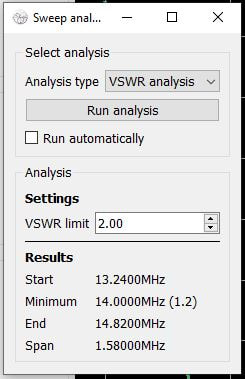 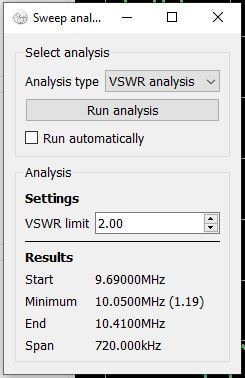 2020-02-09 Since I've been playing with both my Wolf River Coils TIA and the DIY KW4JM center loaded vertical, both 17 feet long and multi band by way of the center loading coil, I've been thinking of getting back to this one. Clearly I've messed up the two inductors and somehow managed to make a very simple and effective antenna "not work" for me. But now I'm wiser! Or I'm about to find out whether I am. The question I've been having is, "why not make this antenna a center loaded 17' vertical too? So, knowing the inductance of the coils needed for the other two antennas, zero for 20mtrs, 5uh for 30 meters and 14uh for 40 meters, I modified the inductors on the QRPGuys Tri-band to those values. Now if/when it stops snowing, I'll get it outside and see what happens! In the meantime it's snowing and 32 degrees.... Maybe I'll cut the twelve foot top element, four foot lower element and radials, or probably just use the radials from the KW4JM antenna to test it.
2020-02-03 I've found myself interested in this antenna again after having some success playing with my Wolf River Coils TIA mini set up as a center loaded vertical. My thought is to try to duplicate the center loaded WRC settings only using this QRPGuys three band vertical and wire. I'm influenced also by KW4JM's YouTube video describing his DIY No-Stick Buddy-Stick Antenna and my experiences with the Pac-12 antenna. My thought is to set up the WRC again, tweak the coils so it resonates at about 14.150, 10.100 and 7.150. Than I'll carefully measure the lengths of the whip and bottom section and the inductance of the coil for each frequency. I may also play a bit with radial lengths, maybe even trying some cut as KW4JM discusses in the video to see how that affects the result. Finally, I will attempt to duplicate that with the QRPGuys tri-band coils and see what happens! It will at least be a fun exercise.
2019-12-21 Maybe its because it's the shortest daylight day of the year, it's winter or something, but after playing with this antenna using my NanoVNA too-much of the day yesterday as well as with my 17 ft home brew vertical a couple days before, I'm NOT very excited about wire vertical antennas! Too many variables. Radial or counterpoise number and length... Elevated or on the ground... Main element length.... And other things that are probably going on with mine, I'm tired of them. I'm going back to dipoles/inverted vees, end fed half wave's, magnetic loops, etc. They seem to behave as I expect!
2019-10-07 Ok, my life is complete... I just had a third 40 meter CW QSO using this cute little 17' speaker wire vertical with four 10' speaker wire radials! That's nine total contacts with it now, all at 20 watts. Five on 20, one on 30 and three on 40. Think I'll frame it and put it on the wall in the living room! The clip from HRD Logbook below shows them. (Oops, just noticed there is an extra QSO listed there using my 3 band trap inverted vee!)

Calls logged on my QRPGuys Portable Tri-Band vertical in its first four days on the air.
I'm not touting this as the best antenna ever but it does work reasonably well on all three bands. As you can tell if you read my pages, I love playing with antennas. There is just something exciting about building or modifying one and having it work reasonably well. For years antennas were kind of a mystery for me. But starting with the little Xiegu X5105 with its built in SWR Scanner that began to change. That scanner made it easy to see the resonant frequency of the antenna I was building as well as how well it would match up to the rig. Always before it was purely guess work which quickly takes away the fun.
2019-10-06 Well I added one turn to the 30 meter toroid and removed three turns from the 40 meter one and ran the three SWR scans below. The SWR is now below 1.5:1 on all three bands. Haven't had time to test it on air thoroughly but did have one SSB contact on 20 with NR6Q in California QSO party, 1752 miles at 20w. He was a 56 in here. I didn't get a signal report from him as all he was giving out were QSO party serial numbers. But clearly it works on 20. Now I'll do a bit of dressing up to make my changes permanent and go from there. I am a bit mystified why 20 meters seems to have shifted as I didn't intentionally, at least, change the radiating element. Never the less the SWR is very low across 20 meters as well as the other two bands. So far so good!
I do have two tips when building this antenna. 1) don't trim the ends of the wires of the windings on the two toroids right away after initially winding them. Leave a couple inches until you have tuned it. Then do your trimming. I had to splice the wire on the 30 meter one which is working but is a bit cumbersome! 2) don't install the tie wraps until you have tuned it up. I had to cut mine off and then put new ones on after tuning. The ones that came with it were much "prettier" than mine! Otherwise it's pretty simple to build and seems to work as well as one can expect of a 17 foot vertical on these three bands. 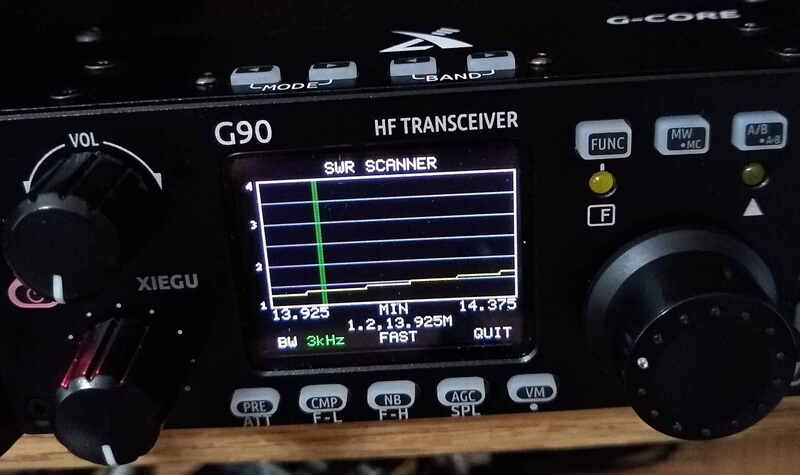 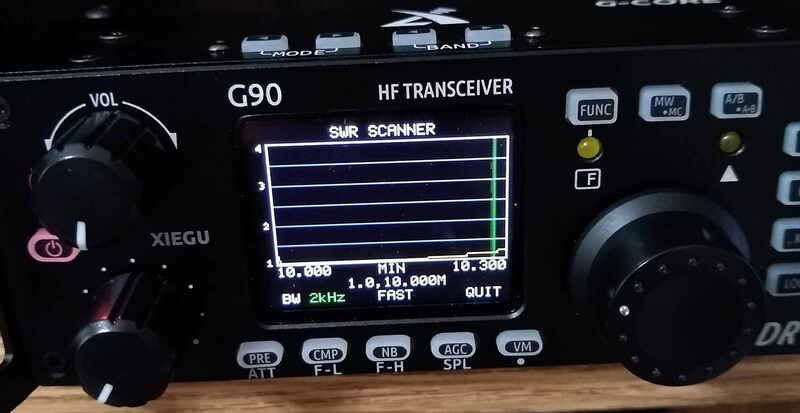 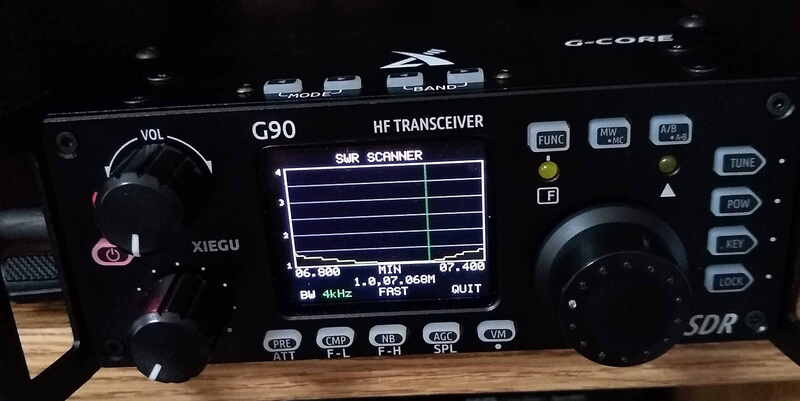 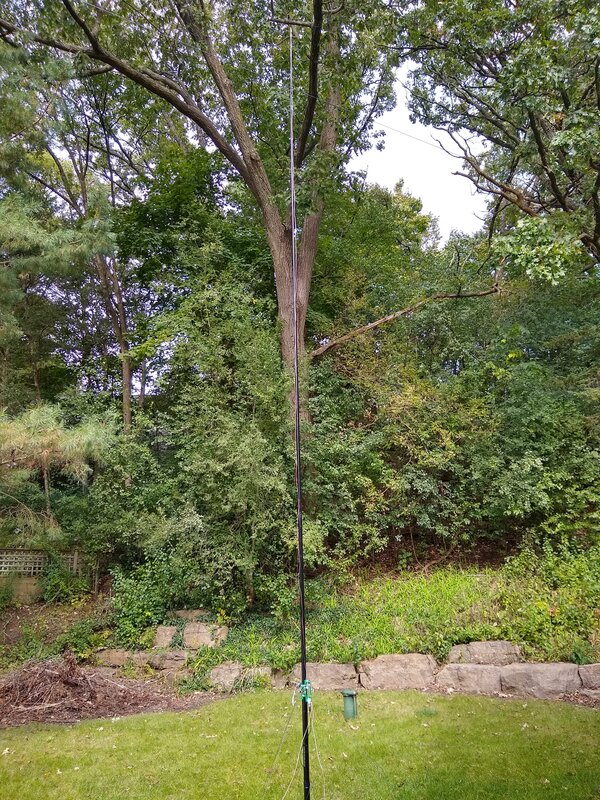 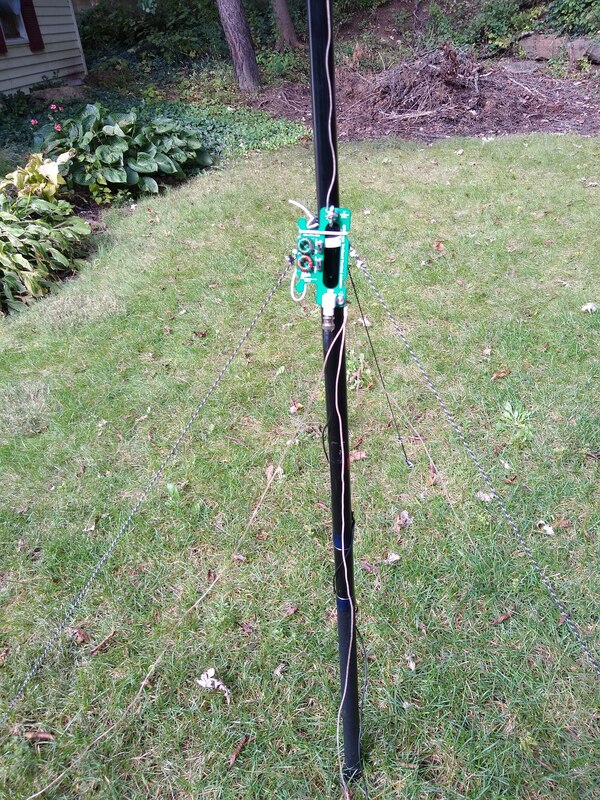 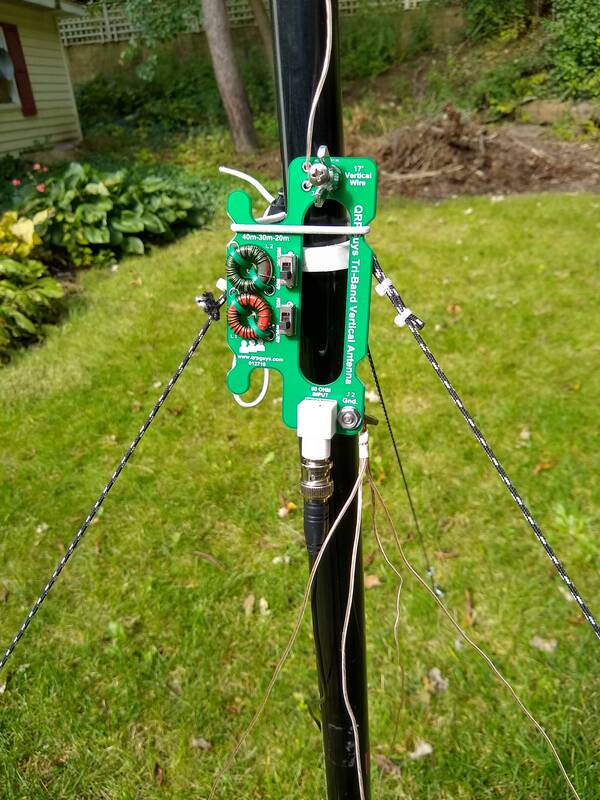 2019-10-05 Today I started to follow up on the suggestion on Facebook that I adjust the windings on the two toroids. On 20 meters the toroids are switched out of the circuit so the radiating element is simply a 1/4 wave vertical. On 30 meters one of the toroids is switched in so it acts as a 30 meter bottom loaded coil shortened vertical that resonates in the 30 meter band. On 40 meters both coils are switched in so now it is a bottom loaded vertical resonant on the 40 meter band. So I added a couple turns to the 30 meter coil, which made it resonant below the 30 meter band! I removed one turn, but then it started raining so I haven't had opportunity to see how close I am. 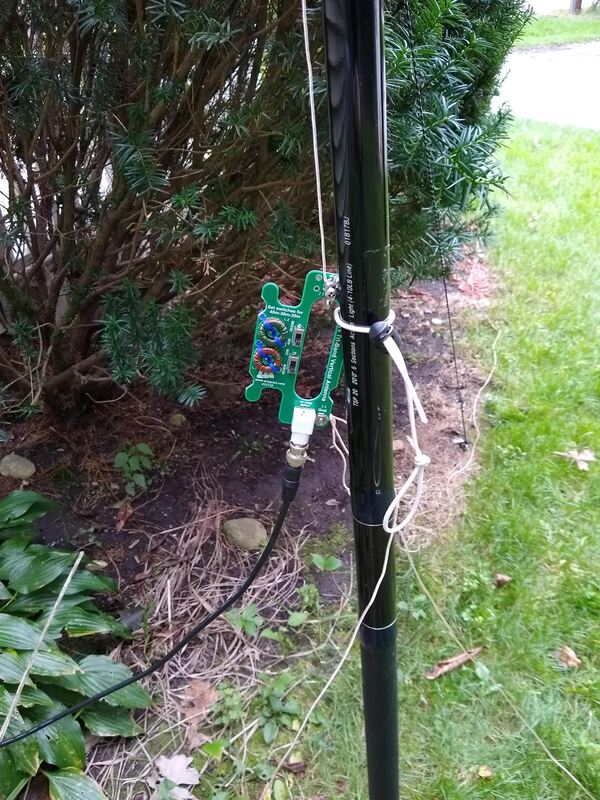 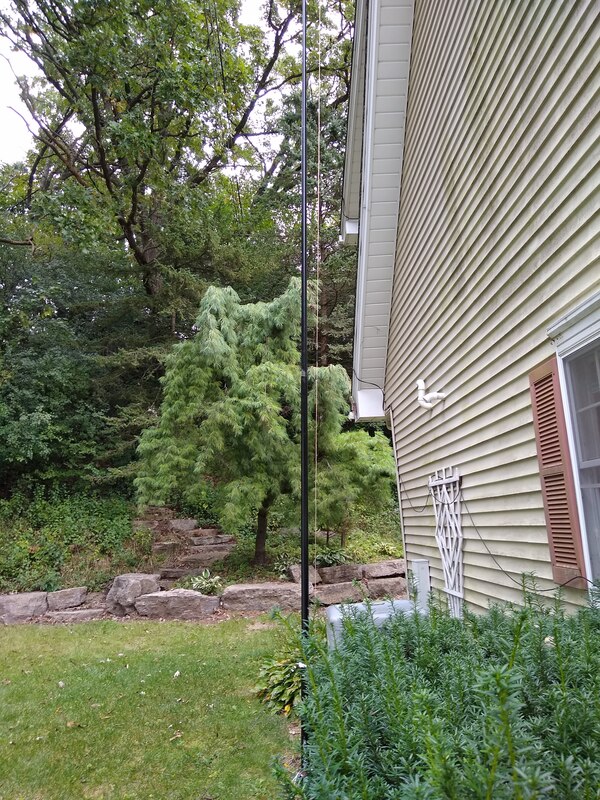 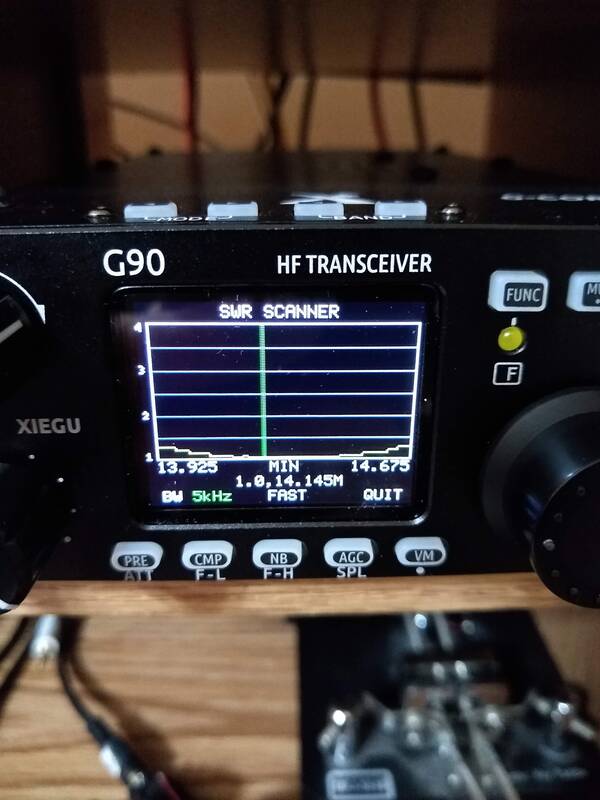 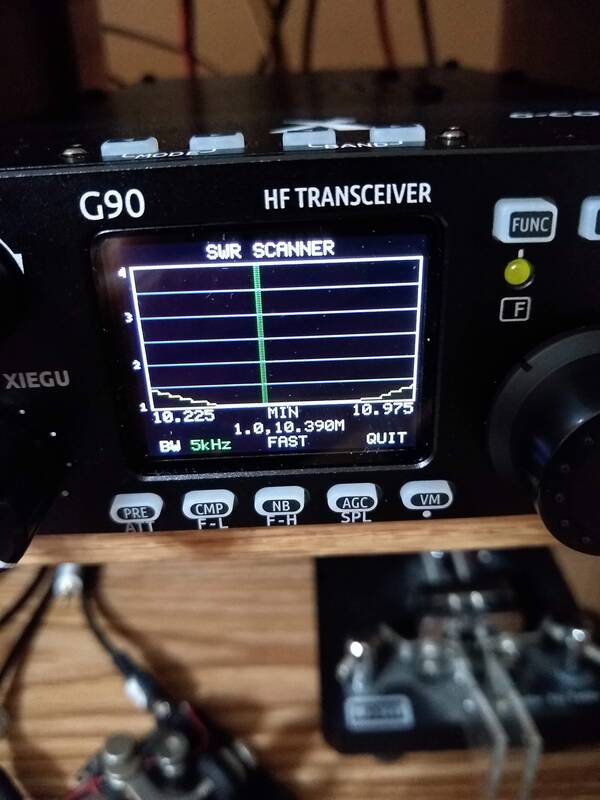 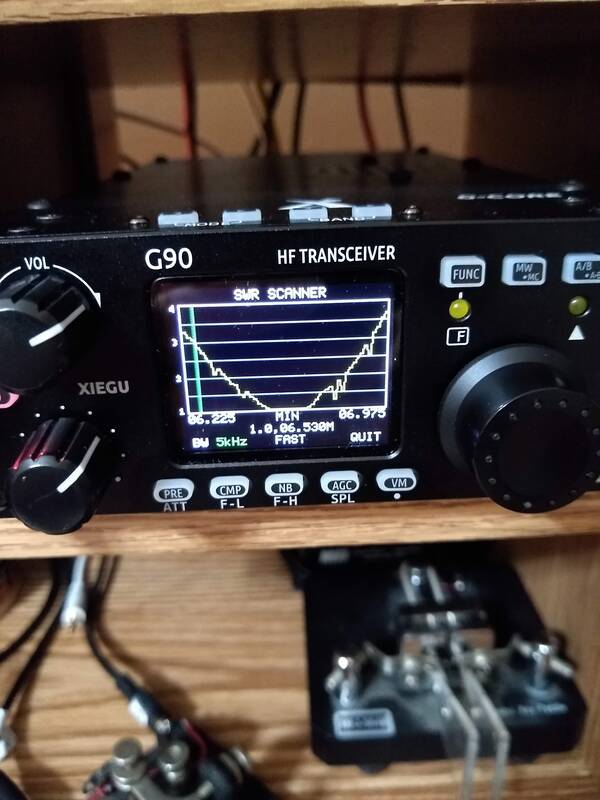 The SWR Sweeps above are without the tuner inline.
My plan is that when I get it resonating satisfactorily in the 30 meter band I'll remove some turns from the 40 meter coil until it is resonant in that band. Theoretically, it would work well on all three bands then. After the rain.... I'll be back with the good or bad news!
2019-10-04 Last night I finished my recently purchased QRPGuys 3 band vertical. So today I cut the 17' vertical wire and three 10' radials and put it up using my 20' Shakespeare Wonderpole. Following the instructions I trimmed the element for the center of the 20 meter band. It has a very low SWR across the entire 20m band. On 30 meters the resonant frequency is above the band at 10.39 mhz and on 40 meters it below the band at 6.65 mhz.  The tuner in my G90 can tune it OK on all three bands.
Running 20 watts I contacted two POTA stations on 20 meters SSB, one just over 1,000 miles distant and the other just under 900 miles away. Then later in the evening I had a "partial contact" with a station in Texas, about 800 miles. I say partial because he was 579 and gave me a 449 at the start but during his first transmission the band changed and he completely disappeared. But at least I know it radiates! Like all verticals band noise is higher than on my EFHW, for example, but signals are generally fairly good. Seems it could be a reasonable, small, light weight, easy to erect portable antenna option.
QRPGuys recommends four radials ten feet long.  I could only fit three where I had it located. I'll relocate it and cut a fourth radial and see if that makes any difference. A fellow ham on Facebook recommended that I keep the radials above ground. I'll try that too. I'd love for it to be a good antenna as it is convenient to carry and put up. Watch for more!