2019-12-07 I started using some form of the G5RV antenna back in about 2005. I've purchased several and made several and until fairly recently used one at my present QTH in Wisconsin as my primary and sometimes only HF antenna. I have nothing negative to say about it. It just works. Yes it requires a tuner and undoubtedly it is not the "best performing" antenna one could have. But it is all band and competitive with most dipole-like antennas in performance. I only stopped using mine because we were planning to move and though the move didn't happen, I never got around to putting it back up. And since discovering the end fed half wave antenna it may be a while before the G5RV gets back into service. 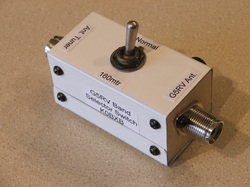 G5RV 160 Meter Switch
G5RV switch. It has been common knowledge for years that you can use a 102 ft. G5RV on 160 meters by simply tying both legs of the feed line together and driving it like a vertical against a ground system. But that is such a hassle that most of us don't bother. I tried it a couple of times and enjoyed 160 so began thinking of a way to make it simple. The box at the right is the result. It consists of nothing more than a switch and a couple connectors. Now to use the G5RV on the regular bands I put the switch in the "normal" position and to operate on 160 simply flip the switch. It is so nice to be able to use 160 with no hassles. QST Magazine liked the idea and published it in the November 2013 issue. For the record, I do not have any special ground system and it works to my satisfaction. Perhaps the house ground system is helping me since it is tied together with my shack ground.

1/28/15 I have been pleasantly surprised at the interest in this little switch. Since writing the article for QST and as a result of questions from potential users I have simplified it by using a SPST switch. Why I didn't see this initially I don't know. Anyway, here is the schematic of the simplified version. I hope it is helpful to someone. The switch clearly has encouraged some people to get on 160 which was the whole purpose of the article in the first place. One guy even used it to get his G5RVjr antenna on 80 meters. 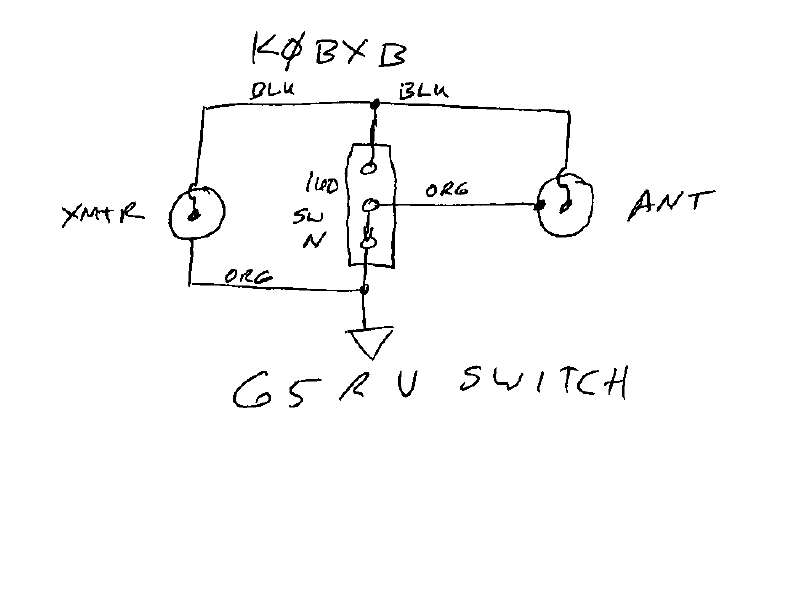